Karnataka Bangalore News Highlights: The Udupi police have booked Karnataka minister K S Eshwarappa after a contractor involved in government projects was found dead in a hotel in the town Tuesday, said officials Wednesday. According to the police, the minister was booked under Section 306 (abetment to suicide) of the Indian Penal Code (IPC). Two of the misnomer’s aides have also been mentioned in the First Information Report(FIR).
Amid reports of Chief Minister Basavaraj Bommai likely to seek his resignation over the death of a civil contractor in Udupi, Karnataka Rural Development and Panchayat Raj Minister K S Eshwarappa Wednesday said he “has seen 100 cases like this” and asserted that “he will not step down.”
Karnataka Health Minister Dr K Sudhakar on Tuesday said vaccination is the only way to prevent potential future waves of the COVID-19 pandemic and that the state is prepared to face such waves. Speaking to reporters at the Karnataka BJP headquarters, the minister said, “Do not delay taking all the doses of the vaccine. Predictive studies say that the fourth wave will start in June-July and last till September. Karnataka is prepared to face it.”
Karnataka State Road Transport Corporation (KSRTC) passengers were greeted with roses in a gesture of gratitude by the KSRTC at the Shantinagar bus station on Wednesday night.
This is the first time KSRTC is operating all 800 premium buses including Ambaari, Airavata, and Rajahamsa from Bengaluru to different cities after nearly three years due to the Covid-19 pandemic.
“In a gesture of gratitude by the corporation, we have distributed roses to passengers and chocolates to the children,” KSRTC said in a statement.
“This is the first time in the last three years, the entire premium fleet available with the Bengaluru Central division is being operated,” the statement added.
The KSRTC decided to operate all premium buses after the decrease in Covid cases and also due to the extended holidays along with summer holidays for children. KSRTC to operate more than 200 additional buses between April 14 and 17 due to extended holidays from Bengaluru to other cities. 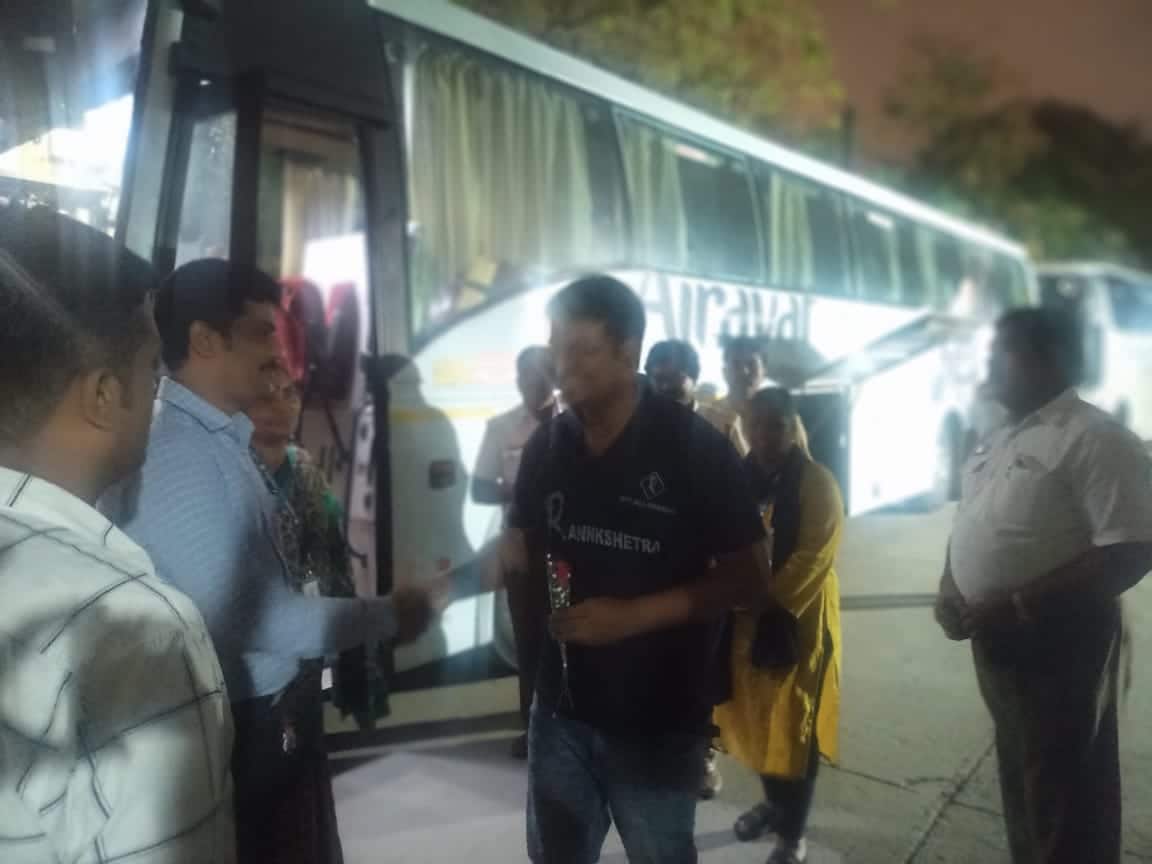 Karnataka Youth Congress workers showed black flags and protested outside CM’s residence at Bengaluru demanding the arrest of Minister KS Eshwarappa over his alleged involvement in the death case of contractor Santosh Patil.

#WATCH Karnataka Youth Congress workers showed black flags and protested outside CM’s residence at Bengaluru demanding the arrest of Minister KS Eshwarappa over his alleged involvement in the death case of contractor Santosh Patil. pic.twitter.com/nJtL4mDaJy
A day after a contractor involved in Karnataka government projects was found dead in an Udupi hotel, senior state minister KS Eshwarappa, who has been booked in the case for abetment to suicide, said there was no question of him resigning.
Opposition Congress and JD(S) have been calling for Eshwarappa’s dismissal from the Cabinet ever since Santosh Patil’s death. Patil, while levelling corruption allegations against the minister, had also said “Eshwarappa should be held responsible” if anything were to happen to him. Read more 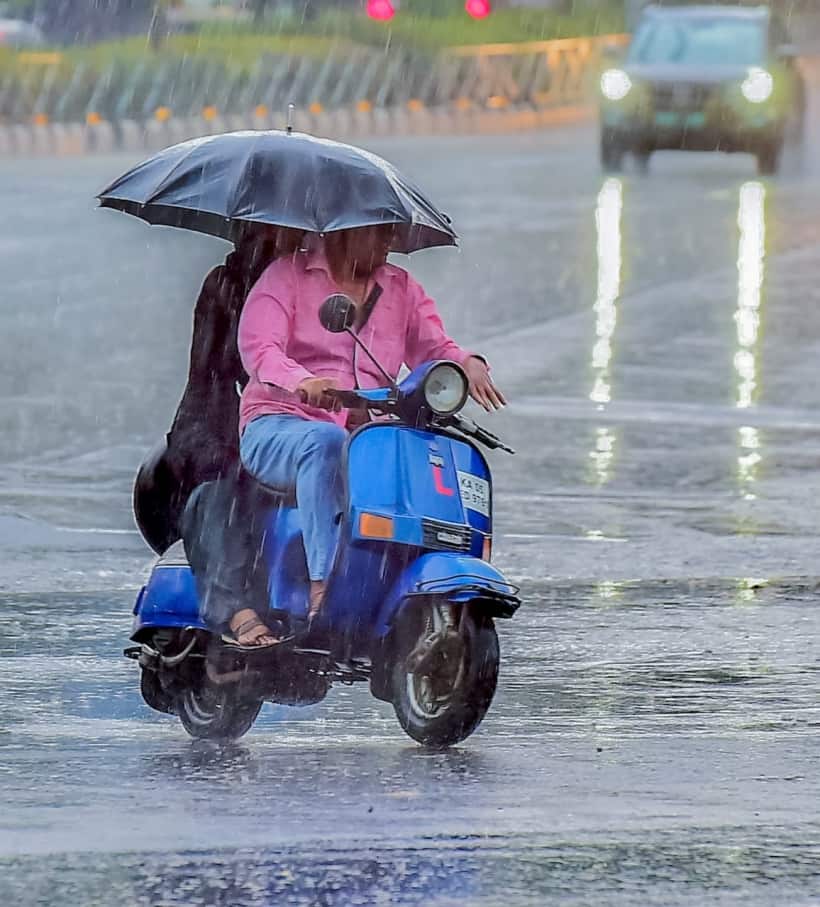 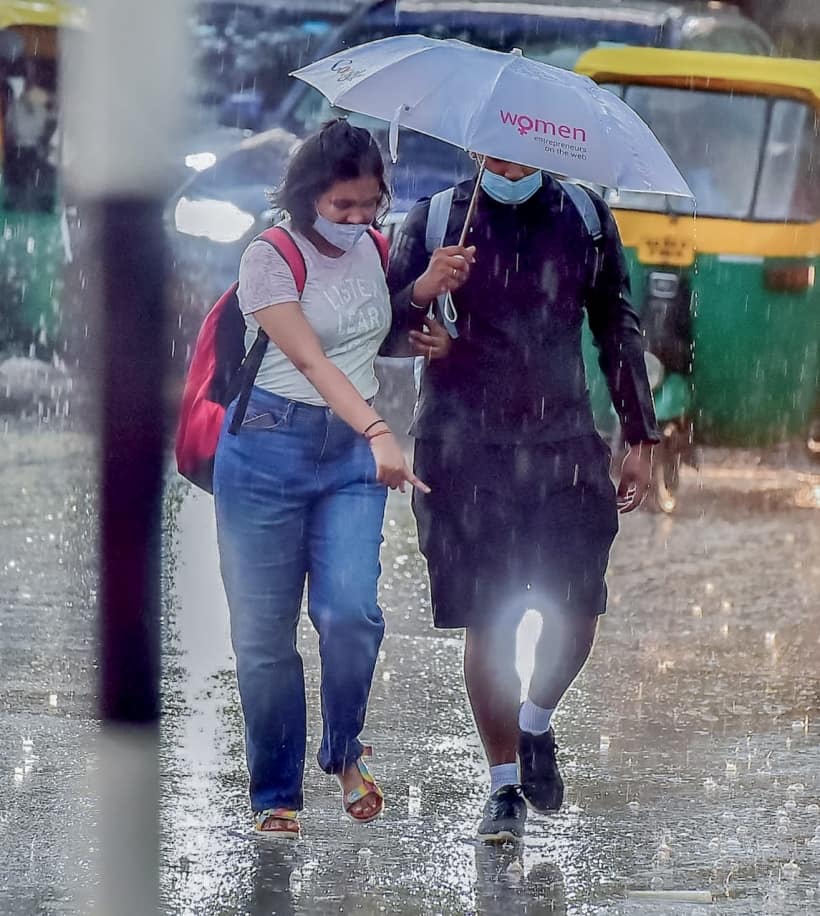 (Express Photo by Jithendra M)
Karnataka Congress leaders held a meeting with the leaders of Davangere and Chitradurga districts to discuss the party’s strategy for the upcoming polls, DK Shivakumar tweeted. Leaders Randeep Surjewala and Siddaramaiah were also present.
ಮುಂಬರಲಿರುವ ವಿಧಾನಸಭಾ ಚುನಾವಣೆ ತಯಾರಿಗಳ ಸಂಬಂಧ ಇಂದು ಕೆಪಿಸಿಸಿ ಕಚೇರಿಯಲ್ಲಿ ದಾವಣಗೆರೆ ಹಾಗೂ ಚಿತ್ರದುರ್ಗದ ಕಾಂಗ್ರೆಸ್‌ ನಾಯಕರೊಂದಿಗೆ ಎಐಸಿಸಿ ಪ್ರಧಾನ ಕಾರ್ಯದರ್ಶಿ ಶ್ರೀ @RSSurjewala ಅವರ ಸಮ್ಮುಖದಲ್ಲಿ ಚರ್ಚೆ ನಡೆಸಲಾಯಿತು. ಈ ವೇಳೆ ಶಾಸಕಾಂಗ ಪಕ್ಷದ ನಾಯಕರಾದ ಶ್ರೀ @Siddaramaiah ಅವರು ಉಪಸ್ಥಿತರಿದ್ದರು. pic.twitter.com/JplpWrApKP
It has rained today in various places within the BBMP limits and the weather forecast department has said that the rain might continue for 3 more days. In this regard, the problems such as the fall of trees or water blockage on roads/ junctions must be solved as soon as a complaint is raised from anywhere in the city. Failing to comply will lead to action against the concerned officials, BBMP Chief Commissioner  Gaurav Gupta strictly warned the officials.
Addressing an emergency virtual meeting, he said that no citizen should face problems during the rainfall.
In 2012, when BJP’s K S Eshwarappa, now 73, was the deputy chief minister of Karnataka, the state Lokayukta police carried out a search at his residence in connection with a corruption case. The search found the BJP leader to be in possession of a currency counting machine.
The discovery of the currency counting machine has been the bane of Eshwarappa’s existence since then with the opposition Congress and Janata Dal Secular never failing to make a reference to its finding whenever Eshwarappa has targeted them on the issue of corruption. Johnson T A writes
BJP national general secretary and Karnataka in-charge Arun Singh on Wednesday hit back at the Congress for demanding the resignation of Minister K S Eshwarappa over the alleged suicide of a contractor, pointing to “atrocities and rapes” in Rajasthan ruled by it.

Civil works contractor Santosh K Patil, who had accused the Rural Development and Panchayat Raj Minister of corruption, was found dead in an Udupi lodge on Tuesday. The minister has categorically refuted the charge. (PTI)
Union Minister of State for Electronics and IT, Skill Development and Entrepreneurship Rajeev Chandrasekhar Tuesday, as a part of the initiative to develop 75 ‘Amrit Sarovars’ by reviving and rejuvenating the existing waterbodies, visited the Kempambudhi, Gubbalala and Mestripalya lakes in Bengaluru. He was accompanied by MLAs M Krishnappa, Ravi Subramanya L, Uday B Garudachar, lake experts and citizens.
Chandrasekhar said that he fought for eight years to recover the Mestripalaya lake by wresting it from encroachers and informed that the development of the lake is in its final phase. Later, taking to Twitter, Chandrasekhar said, “Today visited many lakes that @BJP4Karnataka govt and my colleague MLAs have restored and reclaimed from Congress government’s deliberate destruction. For years have fought to protect Bengaluru’s lakes. Fulfilling PM @narendramodi #AmritKere vision.” Read more.
Karnataka Health Minister Dr K Sudhakar on Tuesday said vaccination is the only way to prevent potential future waves of the COVID-19 pandemic and that the state is prepared to face such waves.
Speaking to reporters at the Karnataka BJP headquarters, the minister said, “Do not delay taking all the doses of the vaccine. Predictive studies say that the fourth wave will start in June-July and last till September. Karnataka is prepared to face it.”
“The new XE variant of Covid-19 is prominent in eight countries and people arriving from these countries are being screened. Masks are still essential but there is no need to worry about the fourth wave. 5,000 children in the age group 6-12 who are not yet eligible for the vaccine will be tested,” he added.
He underlined that the virus has not gone away. Read more.
After a contractor involved in Karnataka government projects, who recently accused a minister of harassing him for “commissions”, was found dead in Udupion Tuesday, Opposition Congress and JD(S) have lashed out at the BJP.
Congress leader Rahul Gandhi tweeted, “BJP’s 40% Commission Govt in Karnataka has claimed the life of their own Karyakarta. The victim’s pleas to the PM went unanswered. PM & CM are complicit. #BJPCorruptionFiles.”
Karnataka Congress chief DK Shivakumar and Leader of Opposition Siddaramaiah demanded action against the BJP leader involved — rural development minister K S Eshwarappa — asking Chief Minister Basavaraj Bommai to sack him. Read more.
The Udupi police have booked Karnataka minister K S Eshwarappa after a contractor involved in government projects was found dead in a hotel in the town Tuesday, said officials Wednesday. According to the police, the minister was booked under Section 306 (abetment to suicide) of the Indian Penal Code (IPC). Two of the misnomer’s aides have also been mentioned in the First Information Report(FIR).
Santosh Patil, 40, who was also a BJP member, was found dead at Shambhavi Hotel in Udupi on Tuesday morning and is suspected to have died by suicide, the police said. Read more.
The Karnataka Covid-19 Technical Advisory Committee, in its 164th meeting on Monday, advised the government to continue with sewage surveillance, stating that it would help detect the spread of the infection and the presence of new variants. 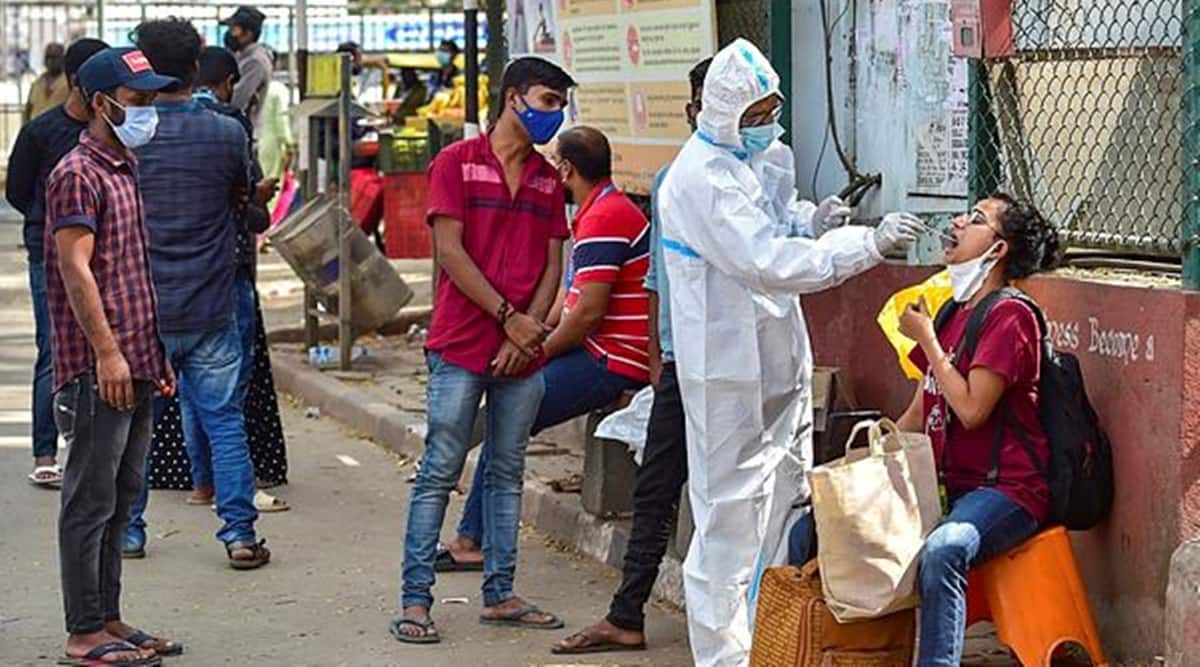 The committee has also recommended surveillance of animals for Covid-19. “It is recommended to initiate this in collaboration with the Institute of Animal Health and Veterinary Biologicals, Hebbal, Bengaluru,” it suggested.
Clinical surveillance of cases for new symptoms and emergence of new variants is in progress at the state-run Victoria Hospital in Bengaluru. Health commissioner D Randeep had on March 23 written to the dean and director of BMCRI, Dr K Ravi, ordering a clinical surveillance at the hospital. (Read more)
Karnataka lorry and truck owners have given a month’s deadline to the state government to intervene and reduce the price of diesel and said they will strike if their demands are not met. Apart from the demand to reduce diesel prices, the Federation of Karnataka State Lorry Owners’ and Agents’ Association has also demanded from Chief Minister Basavaraj Bommai to do away with check-posts at the state’s borders, scuttle the sand mining policy, and stop implementing the vehicle scrappage policy. (Read more)
Days after Hindutva activists vandalised pushcart shops run by Muslim vendors in Karnataka’s Dharwad district on Saturday, the local police four persons in connection with the case. Superintendent of Police P Krishnakant confirmed The Indian Express that the police officials have arrested four Sri Ram Sene activi and the accused identified are Mailarappa Guddappanavar, Mahaling Aigali, Chidanand Kalal and Kumar Kattimani. ‘All were arrested on Sunday while eight persons have been named in the FIR and the search for others is going on with investigation,’ P Krishnakant said.
On Saturday, Sri Ram Sene members wearing saffron shawls vandalised at least four pushcarts belonging to Muslims near the Sri Nuggikeri Hanumantha temple. They threw hundreds of watermelons and coconuts on the road. (Read more)
Bengaluru’s Bishop Cotton Girls’ School Monday alerted the police that it had also received a bomb threat email on April 8 when 16 other schools had got such threats which later turned out to be a hoax. 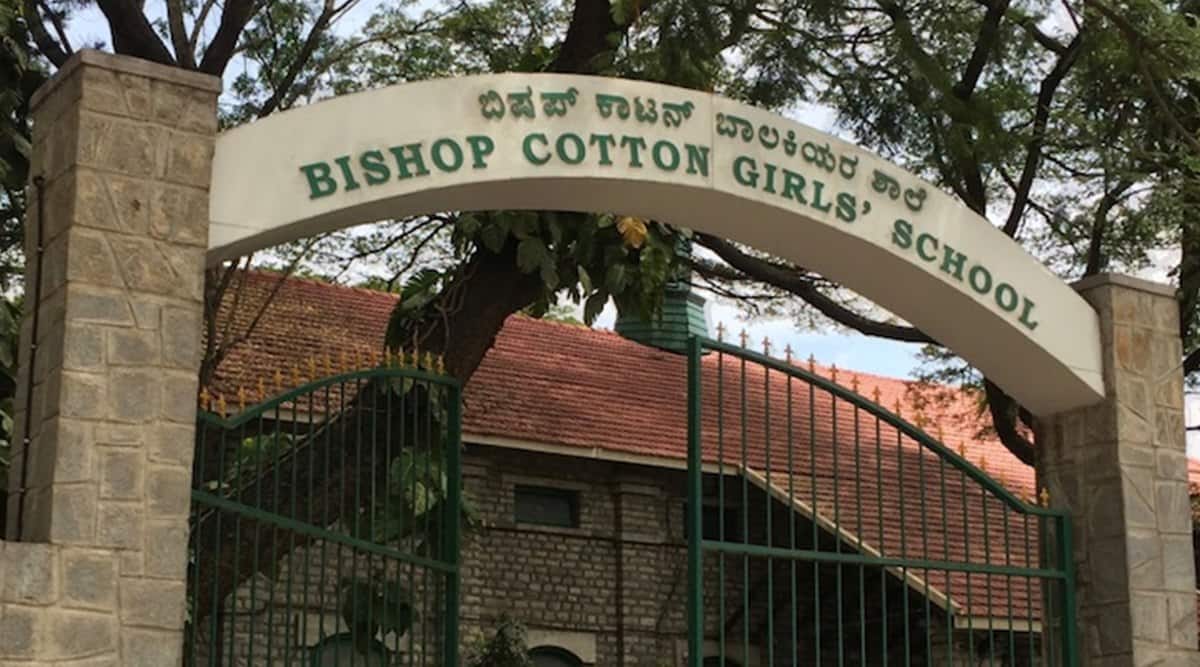 The school management on Monday checked the mail that it received on Friday and alerted the Cubbon Park police station. A bomb squad was sent to the school on Monday afternoon, said the police. (Read more)
With election preparations beginning in Karnataka BJP, the party’s central leadership seems to be cautious about equations and groups in the state unit while giving responsibilities.
Three teams have been set up for public contact programmes at the organisational level. While Chief Minister Basavaraj Bommai heads one, state BJP chief Nalin Kateel and national general secretary in charge of the state, Arun Singh, are leading the other two. People close to senior leaders have been included in all three teams. (Read more)
The Khelo India University Games, which will be held in Bengaluru from April 24 to May 3, is expected to see the participation of 4,529 athletes from 189 universities across the country, Secretary in the Union Ministry of Youth Affairs and Sports Sujata Chaturvedi said.
It’s official! 📢

Doordarshan Sports to produce and telecast @kheloindia University Games 2021. Separate live feeds will be available on Prasar Bharati’s YouTube channel. This year, around 4,500 athletes across 20 disciplines are expected to participate. pic.twitter.com/iCUMukEYpl