Bengaluru, Karnataka Highlights, July 24: Elections are still some time away, but the jostling for who would be chief minister should the Congress win in Karnataka is now happening in public. State Congress chief D K Shivakumar’s open expression of desire to be one, at a press event in Mysuru this week, has resulted in other leaders of the party listing their own credentials to counter his. The ruling BJP in Karnataka is, meanwhile, bemused at the happenings in the Congress. “A few Congress leaders are going around saying, ‘I will be CM, I will be CM’. People are observing all this. Nothing like that will take place. The BJP will win a majority and it will be a BJP CM,” Yediyurappa said.
A day after unilaterally declaring that S Yediyurappa’s youngest son B Y Vijayendra will replace him as the candidate in his Shikaripura constituency in the 2023 Karnataka Assembly elections, former chief minister and BJP veteran B S Yediyurappa on Saturday put the ball in the court of the party high command stating their decision will be final. Yediyurappa said the final decision regarding his son contesting from Shikaripura will be taken by Prime Minister Narendra Modi, Union Home Minister Amit Shah and BJP president JP Nadda.
In other news, the Opposition’s vice presidential candidate Margaret Alva Saturday described the prevailing situation in the non-BJP camp as a “family quarrel”, but asserted they are clear they don’t want a one-party rule and were working to “sink the differences” and unite for the 2024 challenge.
After the 68th National Film Awards were announced on Friday, awarding Dollu two awards: the Best Kannada Film and “Location Sound Recordist (for sync sound films only)”, Oscar-winning sound mixer and the winner of Best Audiography at the 67th National Awards, Resul Pookutty, found himself in the middle of a row after he put out a tweet expressing his surprise that a dubbed film won for sync sound.
The fact was confirmed by the film’s sound designer Nithin Lukose. Pookutty, who has been part of many government committees in the past, says, he’s being “misrepresented in the media, and is being projected as anti-government, which is grossly wrong”. Read more…
Bengaluru recorded 910 new Covid cases with 706 patients discharged today. Bengaluru has 7,734 active cases while the state recorded a total of 9,162 total active cases.
Prime Minister Narendra Modi on Sunday held a meeting with chief ministers and deputy chief ministers of BJP-ruled states at the party headquarters here to deliberate on the developmental work done by them.
Nagaland Chief Minister Nephio Rio, Karnataka Chief Minister Basavaraj Bommai, Tripura Chief Minister Manik Saha, Gujarat Chief Minister Bhupendra Patel, Goa Chief Minister Pramod Sawant, and Tripura Chief Minister Manik Saha are also present.

The Congress in Karnataka will observe ‘Mauna Satyagraha’ (silent resistence) on Tuesday when their party supremo Sonia Gandhi will appear before the Enforcement Directorate (ED) officials probing the alleged money laundering in National Herald case, state unit president D K Shivakumar said. (PTI)
A 17-year-old girl from Karnataka finds herself among the rarest of rare individuals as she is not only ambidextrous but can write simultaneously with her hands in 11 different ways, including blindfolded and in opposite directions.
Ambidexterity world record holder Aadi Swaroopa from India. She writes 45 words per minute… pic.twitter.com/fZmNS6yy87

The railways has decided to run three pairs of additional trains every week between Bengaluru and Mangaluru in view of frequent landslides affecting the flow of traffic along the Shiradi Ghat stretch of National Highway-75.

With the aim of manufacturing aircraft in India, Hindustan Aircraft Limited was established on December 23, 1940, in Bengaluru by Seth Walchand Hirachand with financial support provided by the then Government of Mysore. It was later handed over to the Ministry of Defence under the Government of India.

Speaking with indianexpress.com, HAL chairman and managing director R Madhavan said, “HAL grew up with the city of Bangalore. The growth of HAL is synonymous with the growth of this city. It has remained an integral part of the city.” Congress’ Karnataka unit chief D K Shivakumar Sunday called the questioning of party chief Sonia Gandhi and MP Rahul Gandhi ‘harassment’ as he appealed people to join a protest that would be held against the agency’s action on July 26, ANI reported.

The Gandhis have been summoned by the ED in connection with an alleged case of money laundering related to the National Herald newspaper.

Earlier, a trial court ordered the Income Tax Department to conduct an income tax assessment of Sonia Gandhi and Rahul Gandhi.
The BJP and JD (S) workers physically assaulted each other over the installation of flexes in view of the local temple fair on Saturday night. Local JD (S) leader Siraj and another person were injured in the incident.

An ANPR (automatic number plate recognition) camera was installed at various junctions across the city to alert traffic police whenever any vehicle offends the traffic rules.

A total of 20 ANPR cameras were installed in March at various junctions in the city, mainly in Central Business District areas, to help traffic police track vehicles against which fines for various violations are pending.

According to Joint Commissioner of Police (Traffic) BR Ravikanthe Gowda, the cameras aside from detecting vehicles with pending cases against them but also detect vehicles with suspicious number plates and those stolen.
Anjanapura residents in #Bengaluru carried out innovative protest by inviting Lord Yama to highlight #pothole issue in their locality. The protest was to highlight the bad stretch of road, and how strenuous it is for commuters on a daily basis #Karnataka @NammaBengaluroo pic.twitter.com/2kDuXPMlcZ
Karnataka Animal Husbandry Minister Prabhu Bhamla Chavan said on Saturday, that the Karnataka State government would be launching a new cow adoption scheme on July 28 to encourage the adoption of cattle from goshalas, ANI reported.

Chavan said, “Our government is keen to start ‘Punyakoti Dattu Yojana’ for the first time in the country to encourage adoption by public and private organisations for the purpose of nurturing and rearing the cattle in cow sheds to preserve the herd. Basavaraja Bommai will complete one year as the Chief Minister on July 28 and the dedication ceremony will be held on the same day.”

“100 government goshalas are being started gradually and in all these Goshalas domestic and crossbred cattle, needy, exhausted, old, diseased, abandoned by farmers, male calves and cattle seized by court and police custody are being sheltered and nurtured,” the Minister said.
The Bengaluru City police paid condolences to the officials who died in a road accident in Andhra Pradesh while on duty. The police officers were later identified as sub-inspector Avinash, police constable Anil Mulik and Maxwell, the driver of the vehicle.

The officers, who were posted at the Shivajinagar police station in Bengaluru, were sent on duty on a specific tip-off about contraband moving towards Bengaluru from Andhra Pradesh. The personnel were travelling in a private vehicle and on preliminary information, it appears the accident occurred at a barrier on the highway at Putalapattu in the Chittoor district of Andhra Pradesh.

The family members of the deceased and the injured have been intimated and all assistance and support are being rendered to the families, said officials.
Once a political force to be reckoned with in Karnataka, Margaret Alva returned to the political stage after being nominated as the opposition’s candidate for the Vice President of India Election.
Delhi | Opposition’s Vice-Presidential candidate Margaret Alva meets AAP convener & Delhi CM Arvind Kejriwal pic.twitter.com/INDmKhYp9H


The Bengaluru South East Division of Police on Saturday made two young boys Mohd Salman from Kerala and Mithilesh from Bengaluru, the Deputy Commissioners of Police (DCPs) for a few hours. This was an attempt to fulfil their wish to become police officers.  as both the boys were battling cancer. ANI reported. 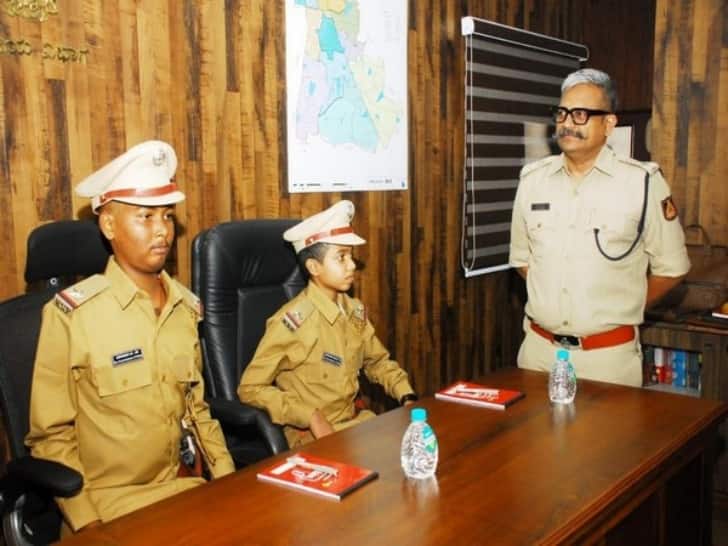 At least five members of a family died, while four others were injured when an unknown vehicle hit the Scorpio car they were travelling in, according to the police report.

The family had gone for a birthday celebration and was on the way back home when the incident took place.

In a traffic incident, two police officials of Bengaluru City who were in Andhra Pradesh for an investigation died after the car they were travelling hit the road median and toppled.

According to the police sources, the deceased are Avinash, police sub-inspector of Shivaji Nagar police station and constable Anil. About four police officials who were in the car has been injured.

A six-member team from Shivajinagar police station had been to Andhra Pradesh in connection with a drug peddling case. The incident took place near Puthalapattu around 3 am. While two police personnel died on the spot four others were injured.

Indian Meteorological Department forecast a generally cloudy sky with one or two spells of rain. The maximum and minimum temperatures in the city would be likely around 27 and 21 degree Celsius respectively.

Lakes of Bengaluru: Hosakerehalli Lake. (Express photo by Jithendra M.)
Spread over 59.36 acres, the Hosakerehalli lake once symbolised the pristine environment. Today it not only receives sewage from a storm water drain but has also turned into a black spot.
Seven acres of the lake have been encroached on. According to the Bruhat Bengaluru Mahanagara Palike (BBMP), six acres have been encroached by a private body and 0.26 acres by the government.
In an eponymous exhibition that opens at DAG, The Claridges on July 25, Giles Tillotson has put together several famed paintings of the time alongside maps depicting war positions and the Mysore cityscape sketched and painted during the period.