The Bengaluru police are on the lookout for a woman who allegedly posed as a doctor to steal gold ornaments from two patients admitted at a hospital in the city on Saturday, officers said.
The suspect, believed to be aged around 35, visited St Philomena’s Hospital located in the Central Business District on Saturday and fled with 46 grams of gold from two patients within 40 minutes, the police added.
According to the police, the accused went to a ward where Sarasa G, 72, was admitted. She asked Sarasa’s son Ramesh Kumar to stand outside the room as she needed to conduct some check-up on the patient’s private parts. Believing she was a doctor, Ramesh stood in the corridor. Ten minutes later, the accused emerged and said the patient was fine. She also asked the man not to disturb his mother. Soon after, a nurse arrived to withdraw the patient’s blood and Ramesh informed her about the doctor’s visit. Read More
The Karnataka State Road Transport Corporation (KSRTC) on Monday launched electric bus services between Bengaluru and Mysuru as part of the FAME-II project. The 43-seater bus is scheduled to leave Bengaluru at 7.35 am and reach Mysuru at 9.45 am.
The ‘EV Power Plus’ buses will ply from Bengaluru to Mysore, Madikeri, Virajpet, Davanagere, Shimoga and Chikmagalur, and vice-versa. A total of 50 intercity electric buses will ply and the operations to other destinations will kick off by February end, KSRTC officials said. The Bengaluru-Mysuru tickets are priced at Rs 300, Rs 30 less as compared to the Volvo club class buses.
On Monday, 35 passengers travelled from Bengaluru-Mysuru and back in the ‘EV Power Plus’ bus. On Tuesday, 43 passengers left Bengaluru at 7.30 am and reached Mysuru at 9.44 am, KSRTC officials said, adding that online booking will be available once all the buses begin plying on the routes. Read More
BBMP workers fix the caved road in Bengaluru’s Mahalakshmi Layout. All photos by Indian Express’s Jithendra M. 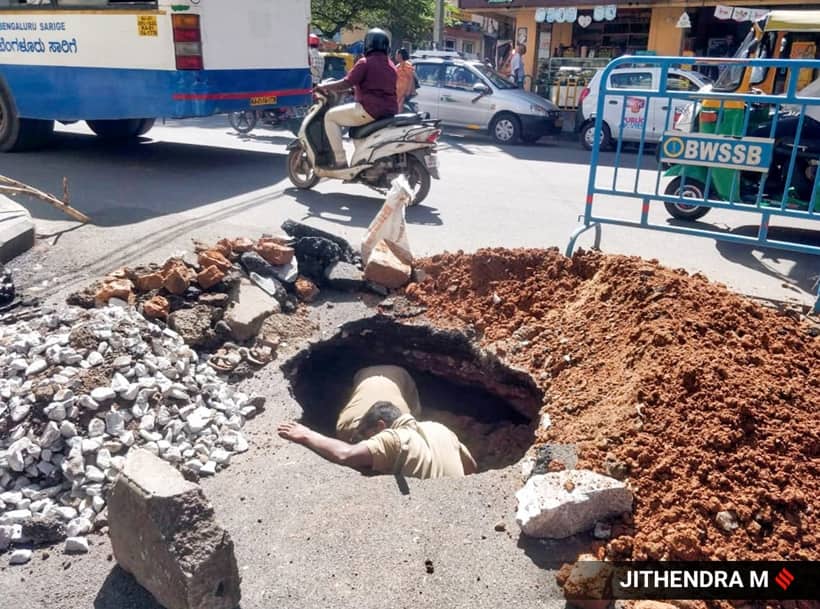 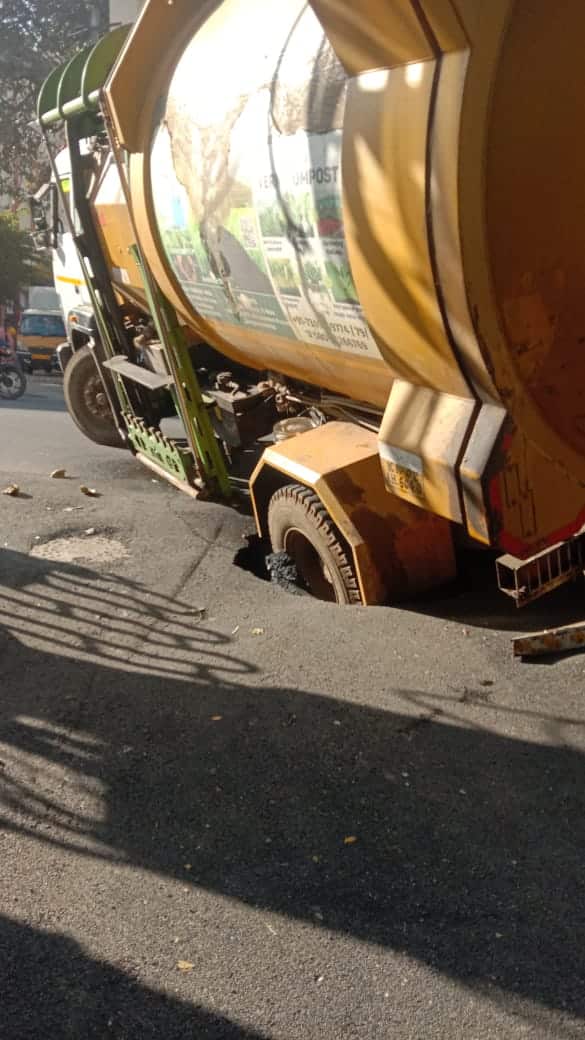 Follow our live blog for more updates from #Karnataka and #Bengaluru https://t.co/GhNGac47mH pic.twitter.com/anAal375NI

The BJP will decide on disciplinary action against its Karnataka MLA and former minister Basanagouda Patil Yatnal – he has been reported to the party high command for attacking party leaders and ministers in recent days – after an ongoing meeting of the BJP national executive, Karnataka Chief Minister Basavaraj Bommai said in New Delhi on Monday.
“We have reported the remarks to the party leadership. The leadership is aware of all this. We had given notices in the past and he had been quiet for a year. Now he has spoken again about a few issues. Nirani (senior minister Murugesh Nirani) has also spoken. Our party president has spoken to the party leaders and has sent a report. We will decide on the issue after the national executive meeting,” Bommai said, even as Yatnal denied reports of a fresh notice to him. (Read more)
Karnataka Home Minister Araga Jnanendra Monday said that the cases related to alleged human trafficker K S Manjunath also called ‘Santro’ Ravi will be handed over to the Criminal Investigation Department (CID). Mysuru city police arrested ‘Santro’ Ravi, a 51-year-old political fixer also with a history of prostitution cases, last Friday after his estranged wife lodged a complaint against him. 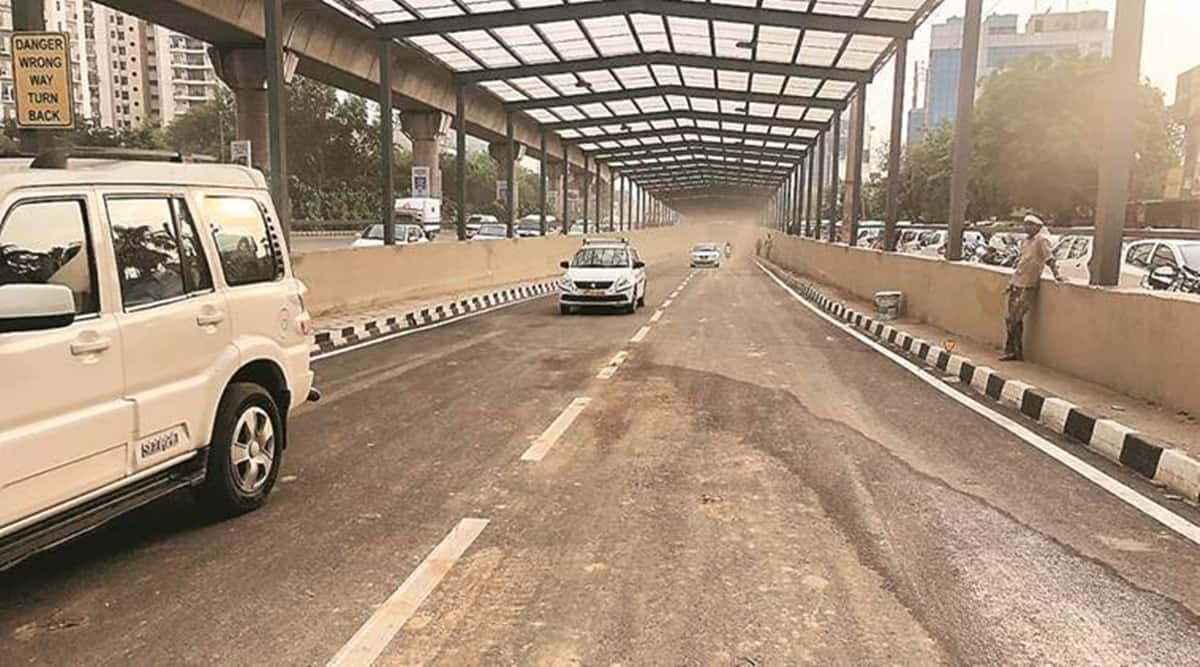 The underpass will help those travelling on Old Airport Road (towards and from Marathahalli). A free right turn is provided for vehicles coming from Marathahalli and entering Suranjan Das Road. This is also a link to the proposed 17.5km signal-free corridor project from the Vellara junction to the Hope Farm junction near Whitefield. It will cover three underpasses. (Read more)
The Karnataka State Contractors’ Association (KSCA) Monday alleged that Tumkur BJP MLA GH Thippareddy demanded a commission to clear bills of various works and to sanction any new projects to contractors.
The Association has decided to file a complaint with the Lokayukta against the MLA. Documents pertaining to such demands by other ministers and legislators from various parties will be released soon, Association president D Kempanna said.
Speaking at a news conference in Bengaluru Monday, R Manjunath, working president of the KSCA and Chitradurga District Contractor’s Association president, alleged that he had paid Rs 90 lakh bribe to Thippareddy over a three-year period to clear bills of various works taken up by him. (Read more)
Two persons participating in Hori (bull Habba (festival) during the Sankranti festival died after a bull attacked them during the celebrations.

The deceased are Ranganath (24) and Lokesh (32). The incident took place in Shivamogga district’s Malur village on Sunday. In Karnataka, Hori Habba or Hatti Habba is organised in rural areas where the bulls are left to run through the huge crowds. The catchers get prize money and also is felicitated.

Ranganath and Lokesh who were part of the event were stabbed in the chest by a bull and were admitted to Shivamogga’s district hospital. Both of them succumbed to injuries on Monday. Police have registered a case against the festival organisers.
Five years in the works, the underpass that connects HAL Old Airport Road and Whitefield in Bengaluru is likely to be opened to the public by the end of January.

Built at a cost of Rs 19.5 crore, the 2.9m underpass on one of the major roads of the Karnataka capital has missed several deadlines. It is also among the three signal-free corridors taken up under the chief minister’s Nagarothana funds. Read More
The Bengaluru police have suspended two constables after a youth alleged that the duo threatened to plant marijuana in his bag in order to extort money.

DCP south-east CK Baba said an inquiry was ordered into the allegation and the constables were suspended. The suspended constables have been identified as Teertha Kumar and Mallesh of Bandepalya police station. Read More
BESCOM Vigilance wing has inspected 10, 908 power installations in the last four months, and imposed fines of Rs. 2.59 crores to errant customers for power theft cases.

From September to December 2022, the vigilance wing registered 1781 cases across 8 districts of the BESCOM region, from which it has disposed of 1721 cases, according to BESCOM Managing Director Mahantesh Bilgi.

In the last three months, BESCOM has collected Rs. 358.3 crore arrears out of Rs. 1417.45 crores pending amount. BESCOM has disconnected 23 lakh installations for not paying the arrears, said BESCOM MD. Its meter staff inspected 2373 meters from September to November and imposed a fine of Rs. 7 crores for misuse of tariff, overload and related violations. Out of Rs. 7 crores fine, BESCOM has collected Rs. 5 crores fine. Indian Army chief General Manoj Pande said that the army is ready to tackle any contingency along China border, as he made an address at the 75th Army Day celebrations in Bengaluru on Sunday. “In the northern border areas, the situation has been normal and through established protocols & existing mechanisms, necessary steps have been taken to maintain peace. Maintaining a strong defence posture at LAC, we are ready to tackle any contingency,” he was quoted saying,  by news agency ANI.
For the first time, the Army Day Parade, which used to be held in New Delhi since its inception in 1949, kicked off in Bengaluru on Sunday at Parade Ground, MEG & Centre. Army chief General Manoj Pande reviewed the parade and presented gallantry awards for individual acts of bravery and sacrifice.
A study by a private health trust on the impact of criminalising consensual sexual acts involving adolescents above the age of 16 and below 18 years through the Protection of Children from Sexual Offences Act, 2012 has called for the need for an amendment to the POCSO Act and the Indian Penal Code to decriminalise consensual acts involving adolescents above 16 years of age while also ensuring that those above 16 years and below 18 years are protected against non-consensual acts under the POCSO Act.
The Enfold Proactive Health Trust’s 18-month study brings to focus the implications of the POCSO Act on adolescent sexuality. The study has found that over 1,000 girls have left their homes in fear of the repercussions of the POCSO Act.