Bengaluru News Highlights: BBMP officials resumed the encroachment eviction drive at Greenwood Regency in Bengaluru early on Wednesday. They have broken slabs which were covering a stormwater drain that connects to the Saul kere lake.
Meanwhile, a Supreme Court bench comprising Justices Hemant Gupta and Sudhanshu Dhulia is hearing petitions challenging the ban on wearing hijab in educational institutions in Karnataka. Solicitor General Tushar Mehta, during the hearing, said that India is a secular nation. Even in countries that are constitutionally Islamic like Iran, not all women are wearing hijab. They are fighting against it. He appeared for the respondent and submitted the Karnataka government’s order recommending that all students will wear the prescribed uniform.
While fissures have come to the fore in the Karnataka unit of Opposition Congress months before the state is scheduled to go for Assembly elections, all may not be well even in ruling BJP in the state, it appears. On Monday, former state minister and senior BJP leader K S Eshwarappa expressed disappointment at not being reinducted in the Cabinet and said he is not attending the ongoing Assembly session in protest. 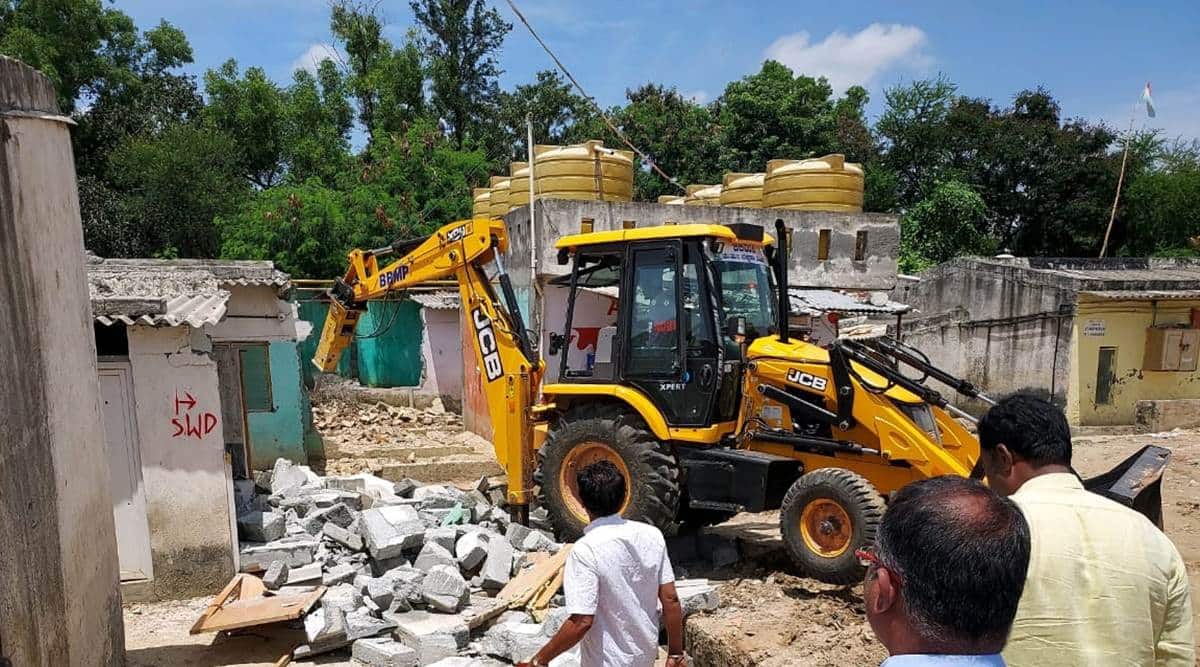 Karnataka CM Basavaraj Bommai felicitates Kerala CM Pinarayi Vijayan in Bengaluru, September 18, 2022. (PTI)
Five people have been arrested in Hyderabad for allegedly kidnapping two Bengaluru real estate brokers after posing as police officers and extorting Rs 11 lakh from them. The Bengaluru police on September 18 identified the arrested people as Prasad, Sathyanarayana (both from Hyderabad), Sridhar, Kiran More and Nagorav (all from Maharashtra), and said two more accused, Harish and Verma, were absconding.
Karnataka Congress president D K Shivakumar on Monday appeared before the Enforcement Directorate here for questioning in a money laundering case.
The 60-year-old Congress leader reached the office of the federal agency at A P J Abdul Kalam Road around 12 noon and was seen entering the office after getting a pass made from the front office. He was accompanied by a few persons. Shivakumar was summoned by the ED last week. The Congress leader had said he was not aware of the case for which he has been asked to appear before the agency.
The monsoon this year caused a damage to the tune of Rs 3,600 crore to the crops, houses and infrastructure in Karnataka, news agency PTI quoted Chief Minister Basavaraj Bommai as saying on Monday. He said the State would claim Rs 1,645 crore from the Centre under the National Disaster Relief Fund.
“More than 10.06-lakh hectare of agricultural land and 42,048 houses were damaged in the flood. We had earlier estimated that the crop loss occurred in 5.8 lakh hectares but according to a broader estimate now, the loss happened in 10.06 lakh hectares till Sunday. We have estimated that Rs 1,550 crore will be required for the crop loss,” Bommai told the Karnataka Assembly.
The RSS will hold a national colloquium, Lokmanthan 2022, from Wednesday in Assam as a response to “inimical forces projecting India’s cultural diversities as differences”, it was announced in Bengaluru on Monday. “Multiple breaking India brigades are advocating sentiments like Free Northeast, Free Kashmir, Free Kerala, etc. Lokmanthan is an answer to such forces who are dividing the nation. Sanskriti is the basis of cultural unity although India has got contradictory traditions, customary practices and bewildering cultures. Lokmanthan also aims to bridge the gap between intellectual and cultural aspects of India,” said J Nandakumar, chief convener of the RSS-affiliated Prajna Pravah, which organises the colloquium.