Bengaluru News Highlights: Residents from parts of Bengaluru opting for a shorter travel time to the Kempegowda International Airport, which is located in Devanahalli, can now take a helicopter ride from the HAL Airport in the city. A local court in Karnataka has extended the judicial custody of pontiff of Murugha mutt Shivamurthy Sharanaru till October 21. Shivamurthy has been jailed since September 1 after a complaint of sexual assault was reported against him on August 26.
Holding banners against “rising” unemployment and communal divide in society, a group of youths met Congress leader Rahul Gandhi in Tumakuru on Sunday and joined him in the Bharat Jodo Yatra. On the 32nd day of the yatra, Gandhi said some political parties were trying to spread hatred in the country by misleading youngsters. He appealed to the youth to join the yatra to spread the message of peace and brotherhood and unite India. Congress general secretary in-charge of Karnataka Randeep Surjewala, who is participating in the Bharat Jodo Yatra, said the party would organise three yatras in the next few months covering every assembly constituency in the state.
Meanwhile, Karnataka Transport Minister B Sriramulu Saturday said he has directed officials to impound autorickshaws that are still being operated by ride-hailing companies despite a ban by the state government. He said notices have been issued to aggregators such as Ola and Uber for “violations” and that he would decide the next course of action in a couple of days. The Karnataka government has directed the ride hailing companies to stop their “illegal” autorickshaw services in the city, citing violation of norms. The action came after many passengers complained of overcharging by the autorickshaws operating under apps like Ola and Uber.
JD(S) leader and former Karnataka chief minister H D Kumaraswamy on Monday criticised the 11th report of the Parliamentary Committee on Official Language and said the panel was conspiring to impose Hindi and transform the country into “Hindistan”.
“Many of the recommendations appear to rip apart and destroy India’s federal structure. The objective of the Amit Shah-led panel is to destroy the federal system with their ‘one nation, one religion and one language’ policy,” the JD(S) leader tweeted.
Kumaraswamy has been vocal against attempts at “Hindi imposition” and recently wrote to the central government against conducting Staff Selection Commission exams only in English and Hindi. Read more
Within four months after Bengaluru’s Kundalahalli underpass was inaugurated, the road above it caved in for about 40m on October 9, prompting the Congress to raise its “40 per cent commission” allegation against the BJP government again.
The road was blocked for commuters and repair was underway at the Rs 19.5-crore underpass connecting the eastern suburbs with other parts of the information technology hub. Read more
#Karnataka #Bengaluru
Protests broke out on Bangalore University’s Jnana Bharati campus after a state-run bus ran over and seriously injured a student who tried to board it around 10am on Monday.
Shilpashree, a student of the mathematics department, is admitted to a private hospital, according to protesters, who gathered in the hundred to demand a ban on public vehicles on the campus. They blocked the entry and exit gates of the campus.
The driver of the bus of the Bengaluru Metropolitan Transport Corporation (BMTC) was booked at the Jnana Bharati police station on charges of negligence. Read more 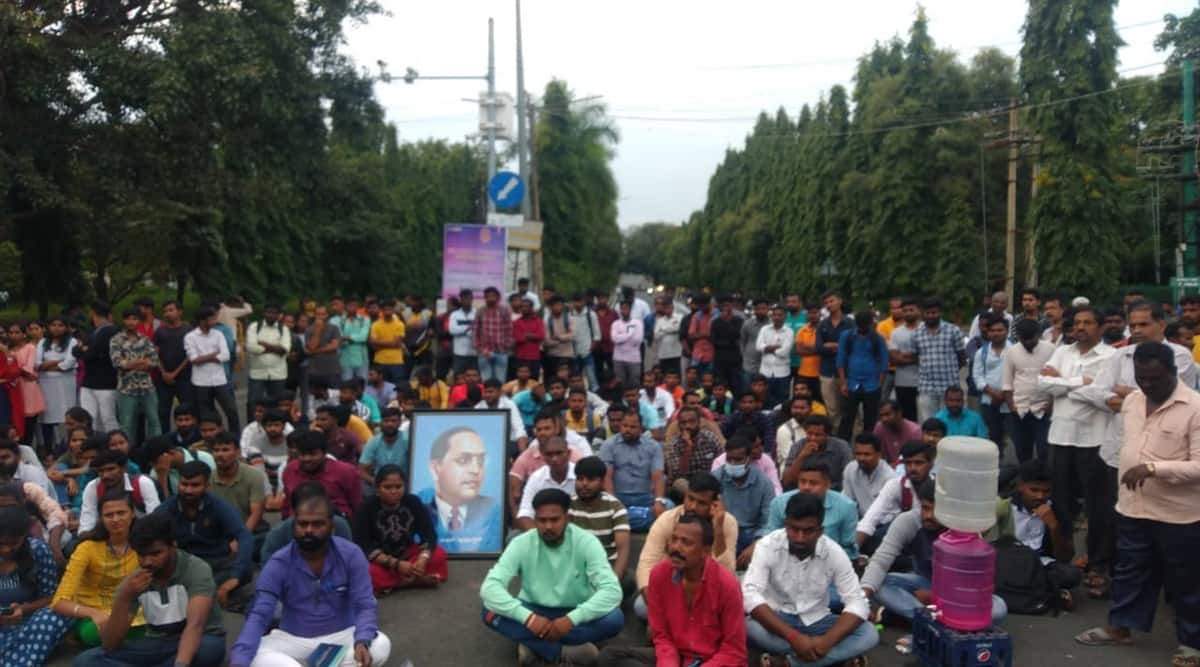 Rahul Gandhi interacted with members of marginalised communities at Hiriyur, on the Karnataka leg of the Bharat Jodo Yatra. 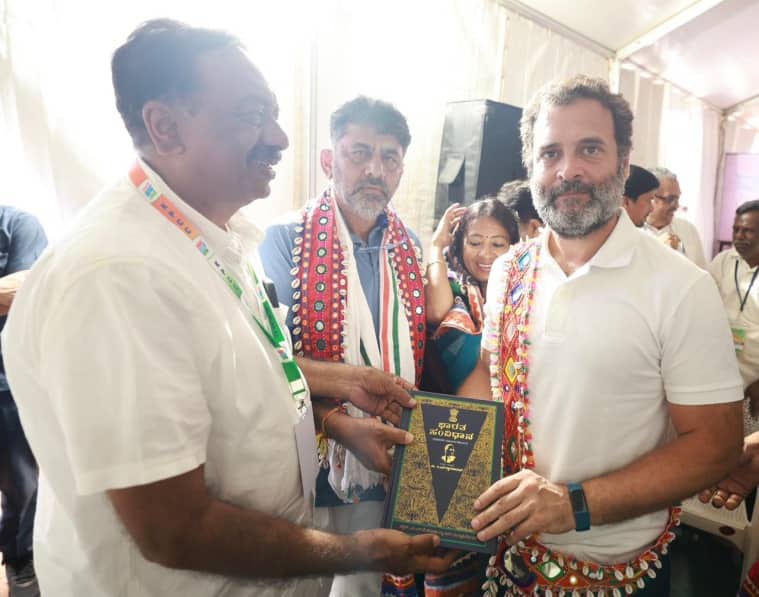 Thunderstorm accompanied by lightning and light to moderate spells of rain is expected in the next three hours in several districts of Karnataka, according to a forecast issued by the Meteorological Centre, Bengaluru.
They are:
1. Chamarajanagara
2. Mysuru
3. Mandya
4. Chitradurga
5. Hassan
6. Dakshina Kannada
7. Belagavi
8. Kodagu
9. Haveri
10. Davanagere
11. Uttara Kannada
12. Dharwad
13. Bagalakote
14. Vijayapura
15. Kalaburgi
The National Tele Mental Health Programme was launched by Thawar Chand Gehlot, the Governor of Karnataka, at the NIMHANS convocation ceremony.
The programme was announced in the Union Budget 2022-23 with the objective “to better the access to quality mental health counselling and care services”. NIMHANS was identified as the nodal centre and International Institute of Information Technology-Bangalore (IIITB) was identified to provide technology support. 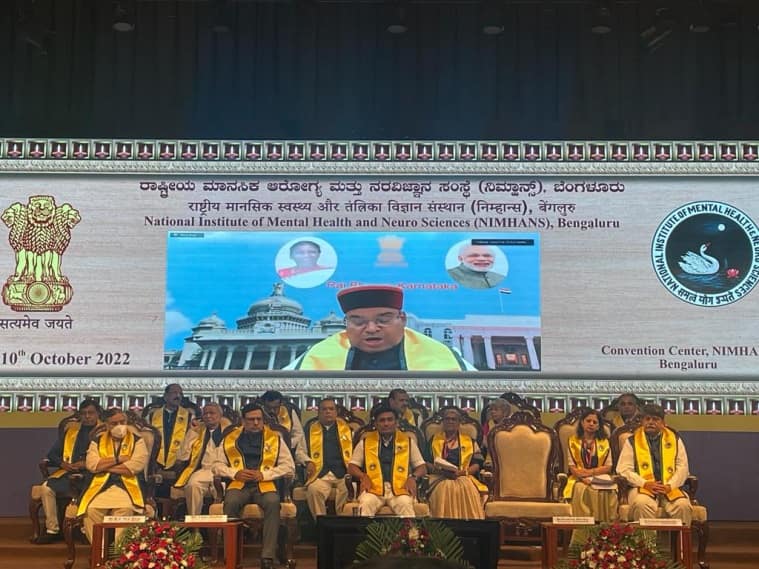 The Common Entrance Examination for candidates selected in Hassan Agniveer recruitment rally will be held at Kittur Rani Chennamma Stadium, Jayanagar, Bengaluru on October 16.
The candidates are instructed to report directly at Gate no 2 of the stadium at 4 am on the day of the examination.
They are also instructed to carry black a blue pen, and a clip board without any marks.
Two mountaineers from Bengaluru who were reported missing after being hit by a massive avalanche on October 4 at Draupadi Ka Danda-II peak in Uttarakhand’s Uttarkashi district have died, said officials.
According to officials, Rakshith K, 26, and Vikram M, 33, were part of a 41-member team of mountaineers from the Uttarkashi-based Nehru Institute of Mountaineering (NIM). They were returning along with their instructors after climbing the peak as part of their advanced training course when they were hit by the avalanche. Read more 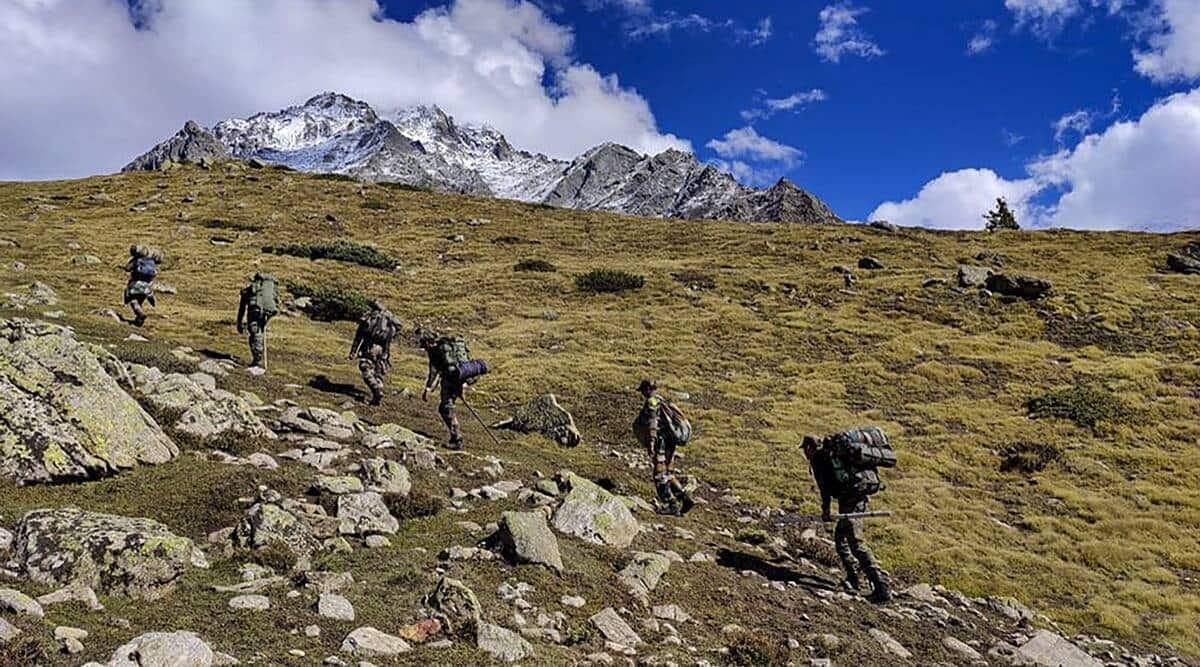 It has been over a month since the cancellation of the Karnataka State Board for Wildlife (SBWL) meeting scheduled to be held on September 5 but the government is yet to decide on the next meeting’s date even as the chorus grows for declaring the Hesaraghatta grasslands as a conservation reserve.
The September meeting was to discuss a proposal for declaring the 5,000-acre Hesaraghatta grasslands in Bengaluru as a conservation reserve. It was cancelled as Chief Minister Basavaraj Bommai, who heads the SBWL, had to visit flood-affected areas on September 4.
A senior Indian Forest Service (IFS) Officer told indianexpress.com, “We have requested the CMO to decide on a new date last month. As of now, the meeting is not scheduled. There were many issues on the agenda of the SBWL meeting scheduled last month. Hesaraghatta was one of them.”Aksheev Thakur reports 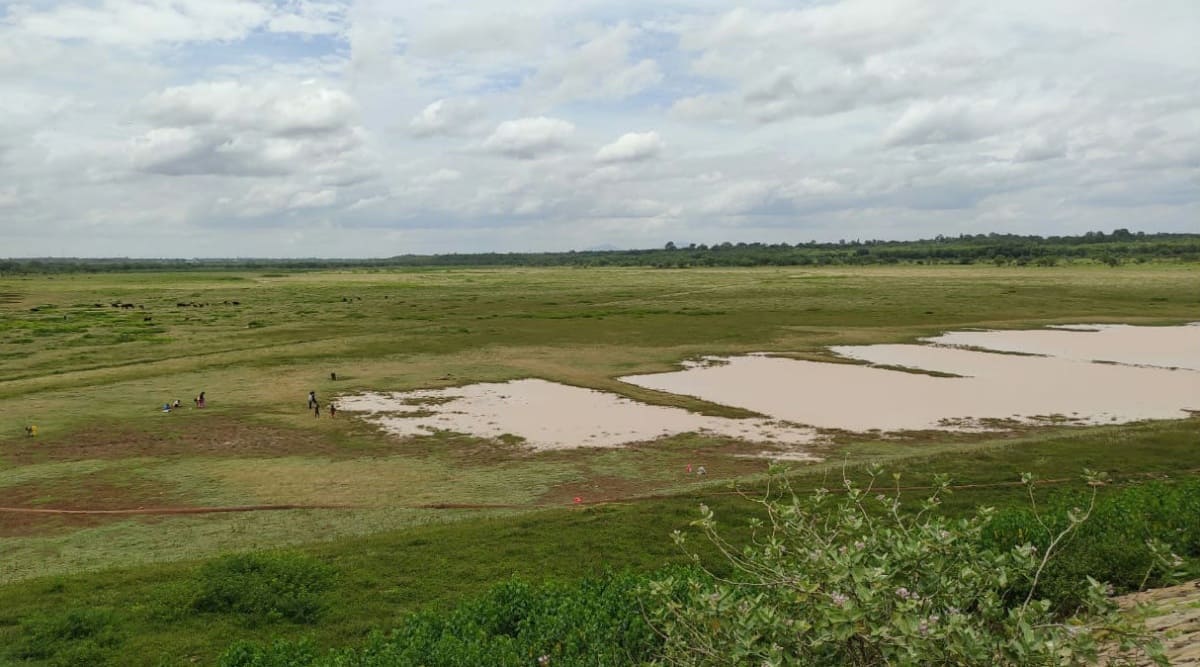 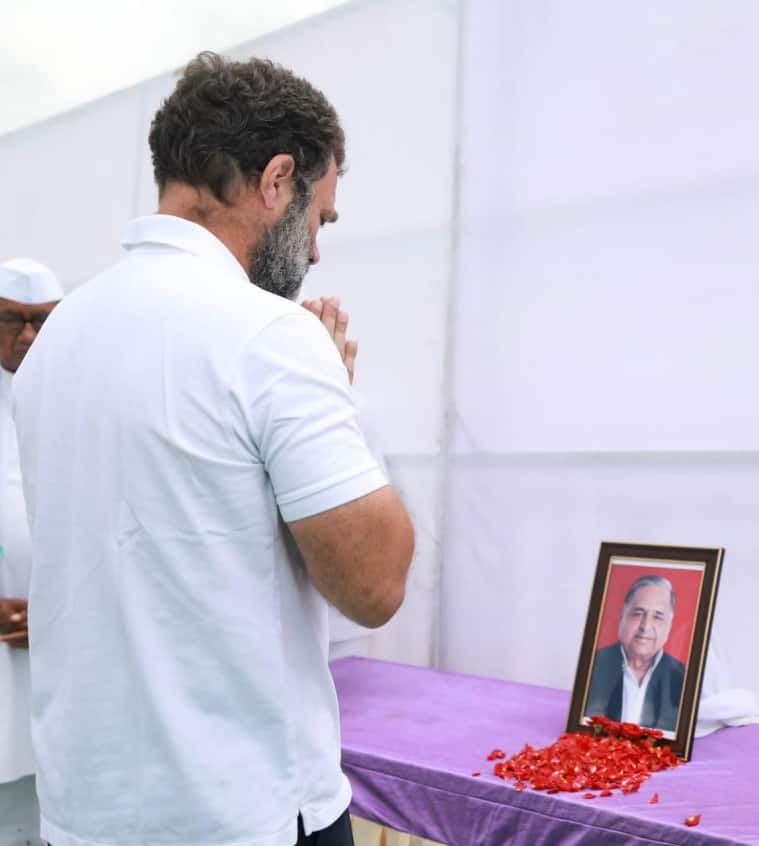 Residents from parts of Bengaluru opting for a shorter travel time to the Kempegowda International Airport, which is located in Devanahalli, can now take a helicopter ride from the HAL Airport in the city.
It was a soft launch and patronage for it will be clear in the coming days. (Read More)
A local court in Karnataka has extended the judicial custody of pontiff of Murugha mutt Shivamurthy Sharanaru till October 21
The Second Additional District and Sessions Court Judge B K Komala extended the judicial custody of Shivamurthy Sharanaru Swami, chief pontiff of the Murugha Math, till September 27.
Shivamurthy has been jailed since September 1 after a complaint of sexual assault was reported against him on August 26.
The Mysuru police lodged a complaint against Shivamurthy Muruga Sharanaru on August 26 under the Protection of Children from Sexual Offences (POSCO) Act, 2012, and Section 376 of the Indian Penal Code (IPC) pertaining to rape. This came after the girls told members of the state Child Welfare Committee they were sexually assaulted between January 1, 2019, and June 6, 2022. The case was later transferred to Chitradurga district police.
Another road near NPS in kengeri satellite town caves in on Sunday night.  BWSSB officials on Monday have initiated repair works as one of the water pipes leak led to road sinking. 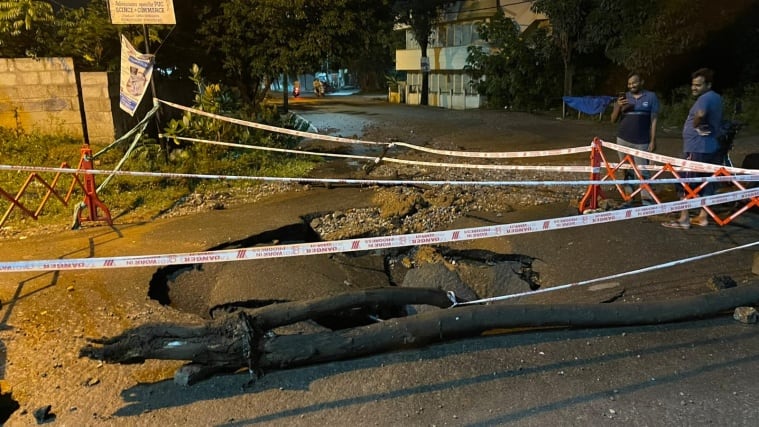 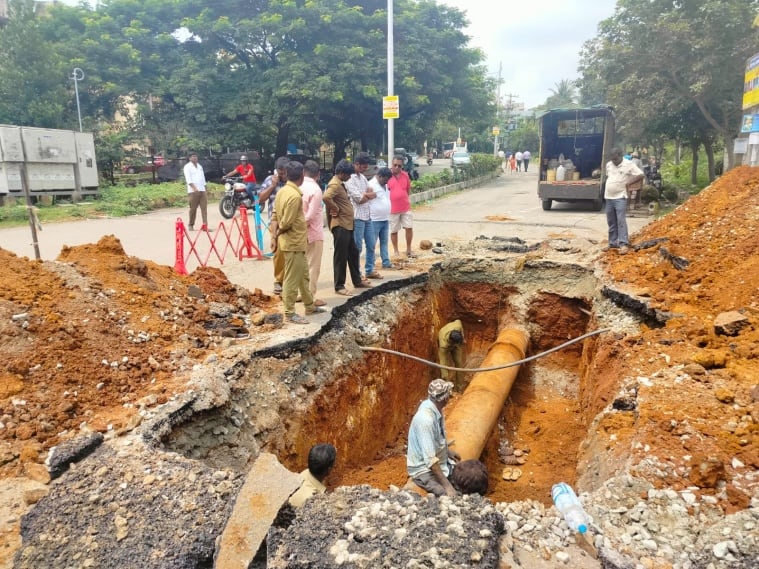 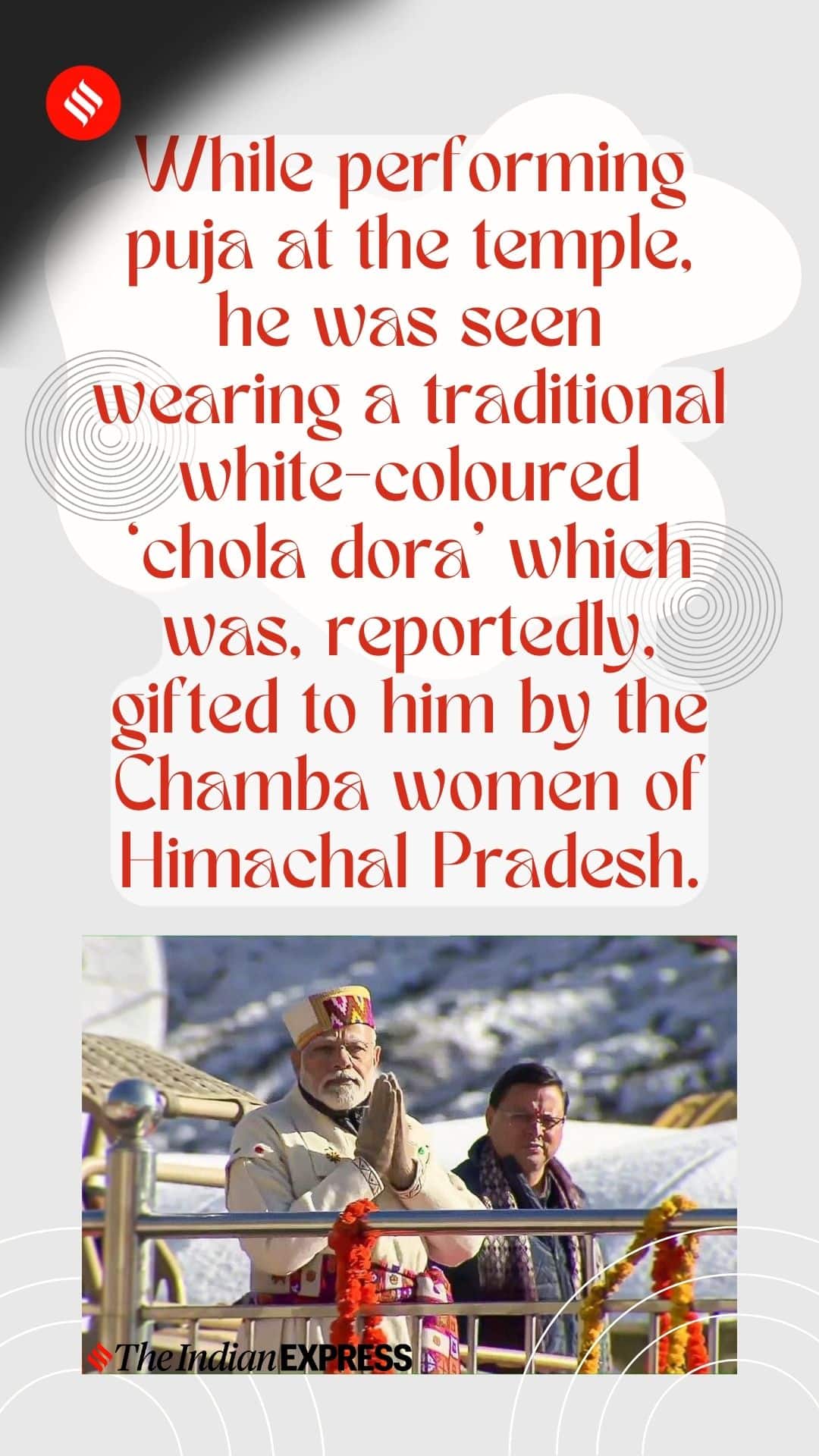 Mulayam ji held several other key responsibilities during his long stint in politics and tirelessly worked for the country.

I pray that his soul rest in peace & also provide the strength to members of his family to withstand the loss.2/2#MulayamSinghYadav
Saddened at the demise of Shri Mulayam Singh Yadav, the Samajwadi Party patriarch, three-time Chief Minister of UP & country’s ex Defence Minister. A true son of the soil, he was a leader of the masses. My heartfelt condolences to his family & friends. May his soul rest in peace.
National Institute of Mental Health & Neuro Sciences (NIMHANS) will hold its 26th Convocation on 10th October 2022 at the Convention Centre, NIMHANS, Bengaluru.

From the famous Janata Bazaar in Gandhinagar to the directorate office of horticulture in Lalbagh Botanical Garden, Krumbiegel’s stamp has all over the design of these buildings.(Express/Jithendra M)
Know Your City: Bengaluru, the Garden City of India, owes a lot to German botanist Krumbiegel
If the blooming flowers and lush green trees in Bengaluru soothe your mind, then you should be indebted to botanist Gustav Hermann Krumbiegel. The German had laid the groundwork for Bengaluru’s pursuit towards earning the sobriquet ‘Garden City of India’.
With October being an important month for Germans as they celebrate ‘Oktoberfest’, it is time for Bengalureans to reminisce about the contributions of Krumbiegel who gave his green thumb to the growth of the city’s landscape.
Krumbiegel is responsible for deliberating and promoting a visual splendour for Bengaluru through his horticultural lens, at a time when many urban planners and engineers had focused on the infrastructure development of Bengaluru. In fact, conservationists point out that the Bengaluru ‘weather’ that everyone celebrates, is because of the ground works laid by horticulturists like Krumbiegel.
Spread over 82 acres, Sarakki Lake in south Bengaluru is one of the oldest lakes in the city. Known as a ‘lake of thousand birds’, a decade ago, the lake had turned into a reservoir for untreated sewage, unabated encroachment and a place to dump garbage. Two years ago, however, it was restored to its former glory following a joint effort by local citizens and the Bruhat Bengaluru Mahanagara Palike (BBMP).
Citizens involved with the lake’s renewal say that the Sarakki restoration model is one worth emulating. “This lake was rejuvenated two years ago. Perhaps, this is one of the few lakes brimming with water. Plenty of aquatic and avian lives thrive here. This is the best lake in Bengaluru,” says Professor K S Bhat, president of Sarakki Lake Area Improvement Trust (SLAIT).
In 2012, SLAIT, a citizens’ collective, was formed. On its demand, revenue officials surveyed the lake and found more than 180 encroachments. A year later, an NGO called People’s Right to Campaign for Water (PCRW) filed a public interest litigation in the Karnataka High Court, which subsequently directed the authorities to remove encroachments from the lake. In 2015, the encroachments were razed. However, the lake was not restored as new encroachments had cropped up.