Bengaluru News highlights: The Karnataka government on Wednesday signed memorandums of understanding (MoUs) worth Rs 5.20 lakh crore during the inaugural day of the three-day Invest Karnataka 2022 – Global Investors Meet. This was apart from announcements made by some industry leaders assuring investment in the state. Seven companies invested Rs 2.9 lakh crore in the ‘Manufacturing – Green Hydrogen and Derivatives’ sector. The investors in this sector were ACME (Rs 51,865 crore), ReNew and ABC (both Rs 50,000 crore each), Avaada (Rs 45,000 crore) and JSW (Rs 43,470 crore), among others. Prime Minister Narendra Modi inaugurated the event earlier today via video conferencing.
The National Investigation Agency (NIA), which is investigating the murder case of Bharatiya Janata Yuva Morcha leader Praveen Nettaru in Sullia, has announced a cash reward to those who provide clues regarding the whereabouts of four accused in the case. The NIA, which has been probing case for the last two months, was not able to trace the four accused, who were members of the banned Popular Front of India. A cash reward of Rs 5 lakh each has been announced for information regarding Mohammad Mustafa Bellare and Tufail Madikeri, while cash reward of Rs 2 lakh each has been announced for those providing clues about Ummar Farooq Sullia and Aboobakker Siddique Bellare.
The Karnataka government conferred the ‘Karnataka Ratna’ award on late actor Puneeth Rajkumar during an event held at the grand steps of Vidhana Soudha in Bengaluru Tuesday. The highest civilian award of the state was received by Puneeth Rajkumar’s wife Ashwini Puneeth Rajkumar. Puneeth Rajkumar is the ninth recipient of the award.
Primary and secondary education minister of Karnataka B C Nagesh Thursday directed the education department to accommodate a 10-minute slot for a daily session of meditation at all schools and PU colleges.
In a letter issued to the principal secretary of the department of school education and literacy, Nagesh said daily meditation will help improve concentration and reduce mental stress among the children.
According to the minister, the letter came after it was suggested by the Karnataka State Primary School Teachers Association. In the letter, Nagesh said meditation will help to develop optimism, good habits and shape the students as responsible citizens.
Read more here https://indianexpress.com/article/cities/karnataka-schools-universities-rules-8247842/
(Express news)
The airport authority of India (AAI) has issued an official publication stating the change of city and airport name from Mangalore to Mangaluru with effect from December 1.
The purpose is to officially inform all stakeholders regarding the name change for Mangalore Airport and Mangalore city.
The name of city ‘Mangalore’ is changed to ‘Mangaluru’ and name of the airport ‘Mangalore’ Airport is changed to ‘Mangaluru International Airport, Mangaluru.
(PTI)

The AAI had handed over the airport in October 2020 to Adani Group to operate, manage and develop for 50 years.
Retired IAS officer B H Anil Kumar, film actor Shashikumar and former MP Muddhahanume Gowda joined the Bharatiya Janata Party on Thursday.
Karnataka Chief Minister Basavaraj Bommai was present during the event. The Criminal Investigation Department (CID) police have arrested Supriya Hundekar in connection with Police Sub-Inspector recruitment examination scam.
26-year-old Hundekar had secured the first rank in the PSI recruitment exam under women’s quota in the Kalyana Karnataka region. According to the CID police, she managed to clear the examination by using a bluetooth device.
A total of 545 candidates who were selected in January 2022 from among 54,287 candidates who took the written exam on October 3, 2021. Out of these, 52 candidates have been arrested for cheating in the exam by the state’s CID police. The number of candidates arrested for cheating through the use of Bluetooth devices has risen to 20.
Karnataka Education Minister B. C. Nagesh has directed all government schools and PU colleges in the state to organize 10 minutes of meditation sessions for students.
In a letter addressed to the Director of Public Instruction and Director of Pre-University colleges, the minister has emphasized on practising meditation daily to improve concentration and the overall mental well being of students. 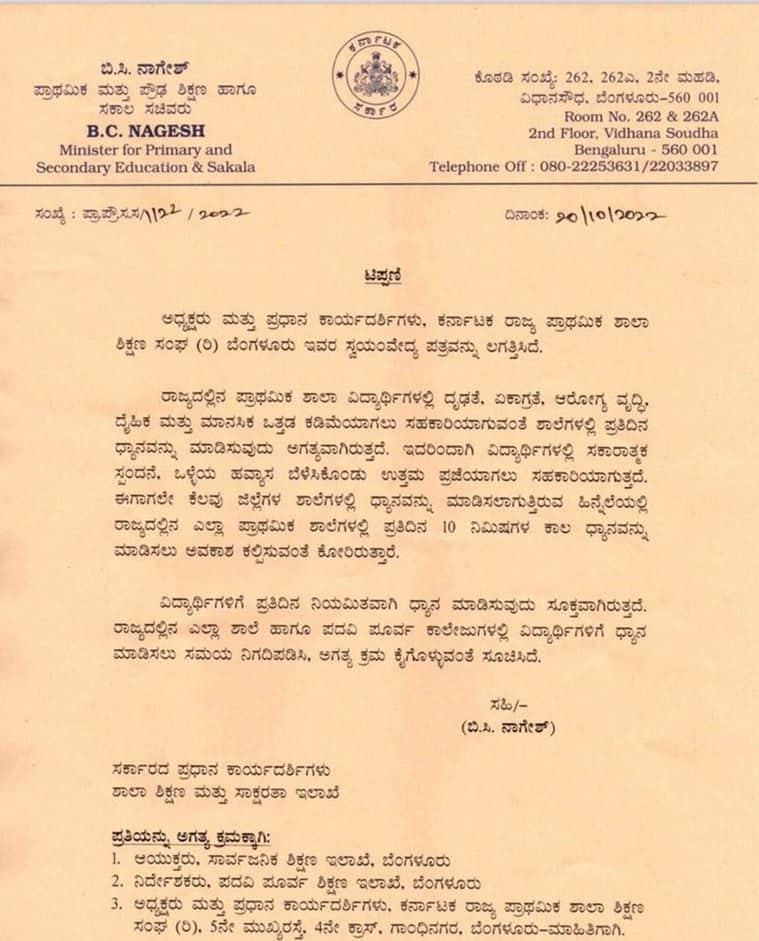 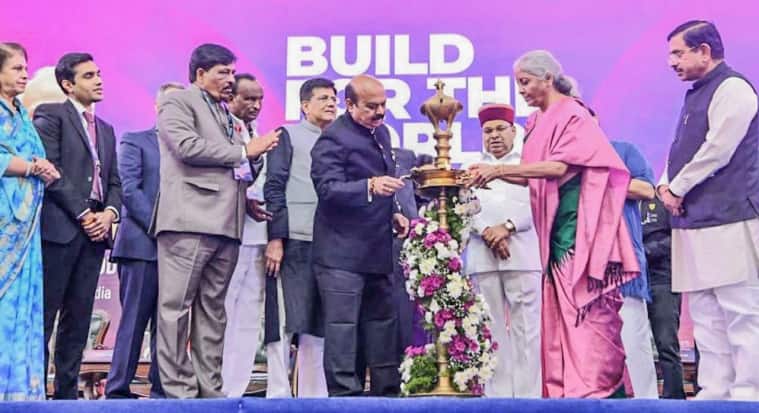 Senior Karnataka BJP MLA GH Thippareddy, 72, Monday filed a police complaint over a possible attempt by unknown persons to trap him in a sex video.
The MLA from the Chitradurga region of central Karnataka stated in his complaint to the cybercrime police that on October 31, he received a Whatsapp video call in which an unknown woman appeared naked. (Read More)
The IMD has predicted widespread very light to light rains likely over Bengaluru and its neighbouring areas. Maximum & minimum temperatures likely to be around 26 & 19 degree C respectively.
Prime Minister Narendra Modi Wednesday said that despite the effects of the war and Covid pandemic, the world was looking at India and the country was attracting record investment.
The PM was speaking after inaugurating ‘Invest Karnataka 2022’, the Global Investors Meet of the state, via video conferencing. The three-day meet being held in Bengaluru is aimed at attracting prospective investors and setting up development agenda for the next decade. (Read More) 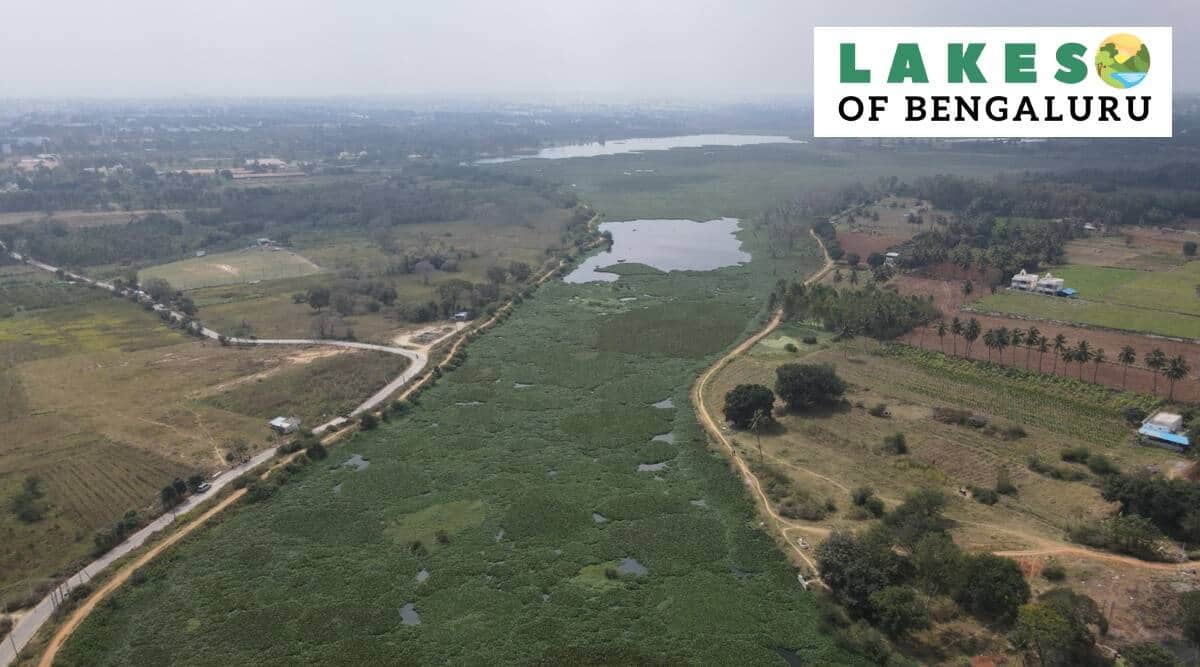 After being pulled up by National Green Tribunal (NGT), the Karnataka minor irrigation department Friday floated tenders worth Rs 2.53 crore to carry out the restoration of Chandapura and Muthanallur lakes in the Anekal taluk of Karnataka by clearing the encroachments.
According to the department, the restoration work has to be completed by mid-2023, before the onset of monsoon. The work involves desilting the lakes and making arrangements for the natural treatment of untreated water flowing into the lakes. The revenue department has been asked to conduct surveys of the lakes and remove encroachments accordingly.
A leopard aged about three years died after allegedly being hit by a vehicle on the Bengaluru-Mysuru expressway near Jigenahalli in Ramanagara district, 50 km from the Karnataka capital, on Monday morning.
According to forest officials, the leopard was a male. “We suspect a speeding vehicle might have hit the leopard injuring it seriously in the head, which led to its death,” said an official.
While there has been no evidence of any vehicle, forest officials have filed a case under the Wildlife Protection Act and are investigating.