10:30 Mass – Second Day of Feast
Bengaluru, Jan 12 (IANS): With just a few months left for the Karnataka Assembly elections, the Bharatiya Janata Party (BJP) is focussing on public meetings to reach out to the voters, apart from holding organisational gatherings to prepare strategy to regain power in the state.
Prime Minister Narendra Modi on Thursday held a roadshow in Karnataka before inaugurating the National Youth Festival in Hubballi.
“Yuva Shakti is the driving force of India’s journey, their aspirations decide the country’s destination. Even in sports, India is going ahead towards becoming a major global power. This is becoming possible due to the capability of the youth of India,” the Prime Minister said. 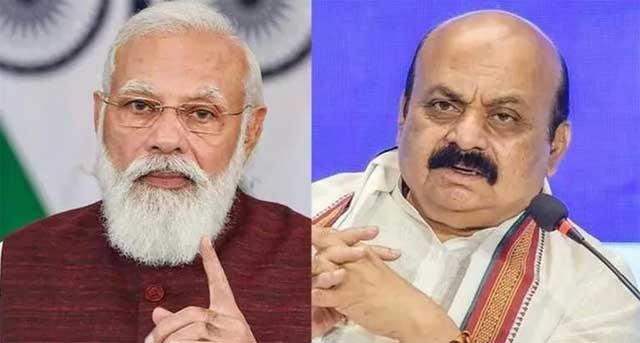 BJP President JP Nadda has also held multiple gatherings in Karnataka.
Sources said the party’s central leadership has also stepped on the ground to break the chain of issues around anti-incumbency.
According to sources, BJP is trying to connect to all segments of the people in Karnataka. The party is meeting SC/ST people, while it is also talking of upliftment of OBCs, and also going to “mutts” to strengthen the party’s ideology.
Chief Minister Basavaraj Bommai is making a strong outreach among SCs and STs in Karnataka. By hiking reservation for SCs by two per cent, 15 to 17 per cent and for STs by four per cent, from three to seven per cent, CM Bommai has created a flutter in the Opposition camp, sources said.
The party has chosen to project the central schemes and PM Modi’s leadership during the crucial polls.
Nadda asserted that the Modi government’s various welfare schemes, including Garib Kalyan Yojana of distributing five kilo rice and one kilo dal to 80 crore poor people, housing and healthcare were meant to uplift the poor and deprived classes of the society.
“By inking a pact with Israel based semiconductor giant, CM Bommai has worked to make Nava Karnataka a policy plank for knowledge based economy. Karnataka accounts for most of startups and unicorns which benefited from CM Bommai’s pro-policy for entrepreneurs.”
Nadda, who was in the state for a two-day visit, spent most of his time meeting religious leaders, apart from visiting several mutts.
Party leaders admit that the BJP hopes the efforts will help it regain ground lost due to corruption and controversies plaguing the government’s initiatives and development activities.
“Nava Karnataka” slogan of Bommai will be the election theme of the BJP.
Sources said PM Modi is expected to unveil a large number of development projects which will change the poll narrative in Karnataka.


Only Congres and AAP can build the country. BJP has lost its credibility. In BJP rule violence has increased.
Mr. CM, We don’t want your Public meeting and with this meetings you are spending huge amount for bringing people and other Security expenses in case PM visits. Instead use this Money for Repair of SHIRADI GHAT on TOP PRIORITY BASIS as it is very difficult to travel from Mangalore to Bangalore.
ಅನ್ನ ಮಾಡುವಾಗ ಸ್ವಲ್ಪ ಕಡಿಮೆಯೇ ಮಾಡಿ. ಇಲ್ಲವಾದರೆ ರಾತ್ರಿ ಹೊತ್ತಿಗೆ ಬಾಡಿಗೆಗೆ ಜೆಸಿಬಿ ತರಬೇಕಾದಿತು.
It looks like mushrooms are grown on the face of our prime minister…..He looks fair and has reddish and mushroomy complextion. Our prime minister is cute and handsome 💃 🕺 💃 💃 🕺
Nazaar Utharna Padega..Modijika. Saddam Hussain alike is on road with influence of podee having josh now.
Haa haa uthariye nazaar…..saath me aapka bhi nazar utharna he hame…..Original id lekar dkatte aa javo ji….
Only Namo can save state unit and lead them to victory
Badly need someone to save the state from this useless BJPeee government!!
Hope no political killings…. Just development speeches
If people are voting back present ruling dispensation….. more so for all failures then should not complain … Anti incumbency factor then does not apply .. Even when ship is sinking …. . aall is well …
AAP will sweep Bengaluru. Either AAP or congress will come to power in Karnataka. AAP should be given a chance. Kejeriwal is the future PM of India
While looking ongoing BJP might sweep 90% seats by not giving any chance for opposition parties. Only Siddu and DK Shi’s sweeping road will remain in mind of people forever…with no effect whatsoever of Bharat Jodo Yatra.
Sapne… hazaron sapne… One time given to bajapa and people are fed up… 90% bajapa candidates may loose deposit money….
First fulfill all your Promises …
All promises fulfilled. Ram Temple, CAA, Triple Talaq, Article370, GST, Demonetization, Killing all islamic terrorists.
Still waiting for my Rs. 15 Lacs …
All round failures Only propaganda … Even basic security earlier report says youth breaches security … Double engine train .. only single driver from Delhi … Joshimath sinking .. all because of negligence .. experts advice not taken .. Safety security poverty jobs all failures .. Govt for only 2 business houses
Namo again
Disclaimer:
Please write your correct name and email address. Kindly do not post any personal, abusive, defamatory, infringing, obscene, indecent, discriminatory or unlawful or similar comments. Daijiworld.com will not be responsible for any defamatory message posted under this article.
Please note that sending false messages to insult, defame, intimidate, mislead or deceive people or to intentionally cause public disorder is punishable under law. It is obligatory on Daijiworld to provide the IP address and other details of senders of such comments, to the authority concerned upon request.
Hence, sending offensive comments using daijiworld will be purely at your own risk, and in no way will Daijiworld.com be held responsible.
Daijiworld Residency,
Airport Road, Bondel Post,
Mangalore – 575 008 Karnataka India
Telephone : +91-824-2982023.
General Enquiry: [email protected],
News & Info : [email protected]
Kishoo Enterprises,
3rd Floor, Mandavi Trade Centre, Kadiyali, Udupi – 576 102
Telephone : 0091-820-4295571
E-mail : [email protected]
Daijiworld Middle East FZE,
P.O.Box: 84772, Dubai, UAE
Tel: 971-50-6597629
Fax: 971-4-2639207
Email: [email protected]
Copyright &copy 2001 – 2023. All Rights Reserved.
Published by Daijiworld Media Pvt Ltd., Mangalore.
Powered by ATC Online LLP