Chennai Chief Minister MK Stalin announced Rs 5 lakh ex-gratia from CM Relief Fund to family members of five killed in Madurai firecracker factory blast on Thursday.
According to a report by newsagency PTI, the CM has deputed Minister for Commercial Taxes, P Moorthy to speed up rescue and relief work and ordered the best treatment facilities for the injured workers at the Madurai Government Rajaji Medical College Hospital.
Five people died and over 10 others were injured in a blast at a firecracker unit near Tirumangalam in Tamil Nadu’s Madurai district.
Five people are feared dead and over 10 others injured in a blast at a firecracker unit near Tirumangalam in Tamil Nadu’s Madurai district, police said.
The number of casualties is likely to increase, said the Fire and Rescue Services personnel who are at the spot carrying out rescue operations.
Police officials have confirmed that 11 persons sustained serious injuries in the incident.
Read more here https://indianexpress.com/article/cities/chennai/tamil-nadu-factory-blast-8261065/
The Supreme Court on Thursday granted four weeks time to the Centre to file its response to BJP leader Subramanian Swamy’s plea seeking a direction that the Ram Sethu be declared a national heritage monument, asking why it was dragging its feet.
A bench comprising Chief Justice D Y Chandrachud and justices Hima Kohli and J B Pardiwala was told by Swamy that it was a small matter where the Centre was supposed to either say “yes” or “no” to the submission.
“The counter affidavit (reply) is ready. We will have to get instructions from the Ministry,” the counsel for the Centre said while seeking time for filing the response “Why are you dragging your (Centre) feet,” the bench observed.
“Let the counter affidavit be filed within four weeks with a copy to be served to the petitioner (Swamy). The rejoinder, if any, be filed within two weeks thereafter,” the bench said in its order.
Earlier on August 3, a bench headed by then CJI N V Ramana, since retired, had said it would list for hearing the plea of Swamy.
Ram Sethu, also known as Adam’s bridge, is a chain of limestone shoals between Pamban Island, off the south-eastern coast of Tamil Nadu, and Mannar Island, off the north-western coast of Sri Lanka. PTI
With Prime Minister Narendra Modi scheduled to visit Tamil Nadu Friday to take part in the 36th convocation ceremony of the Gandhigram Rural Institute (GRI) in Dindigul, elaborate security arrangements have been put in place.
More than 4,000 police personnel have been deployed around Dindigul and other neighbouring districts. The police said surveillance has been increased and they are carrying out checks at major public gathering points, including railway stations, bus stands as well as in lodges, ahead of the prime minister’s visit. The police have also made alternate traffic arrangements in the state’s Dindigul and Madurai districts ahead of PM Modi’s visit. Read more.
Lok sabha chairman and speaker Om Birla will be visiting Chennai today to take part in a private university’s convocation and interact with the students.
The National Investigation Agency (NIA) has been conducting searches at 45 locations across Tamil Nadu in connection with its ongoing probe into October 23 Coimbatore LPG cylinder explosion that took place in a car, reports ANI.
Coimbatore car blast case: NIA raids underway at 45 locations across Tamil Nadu 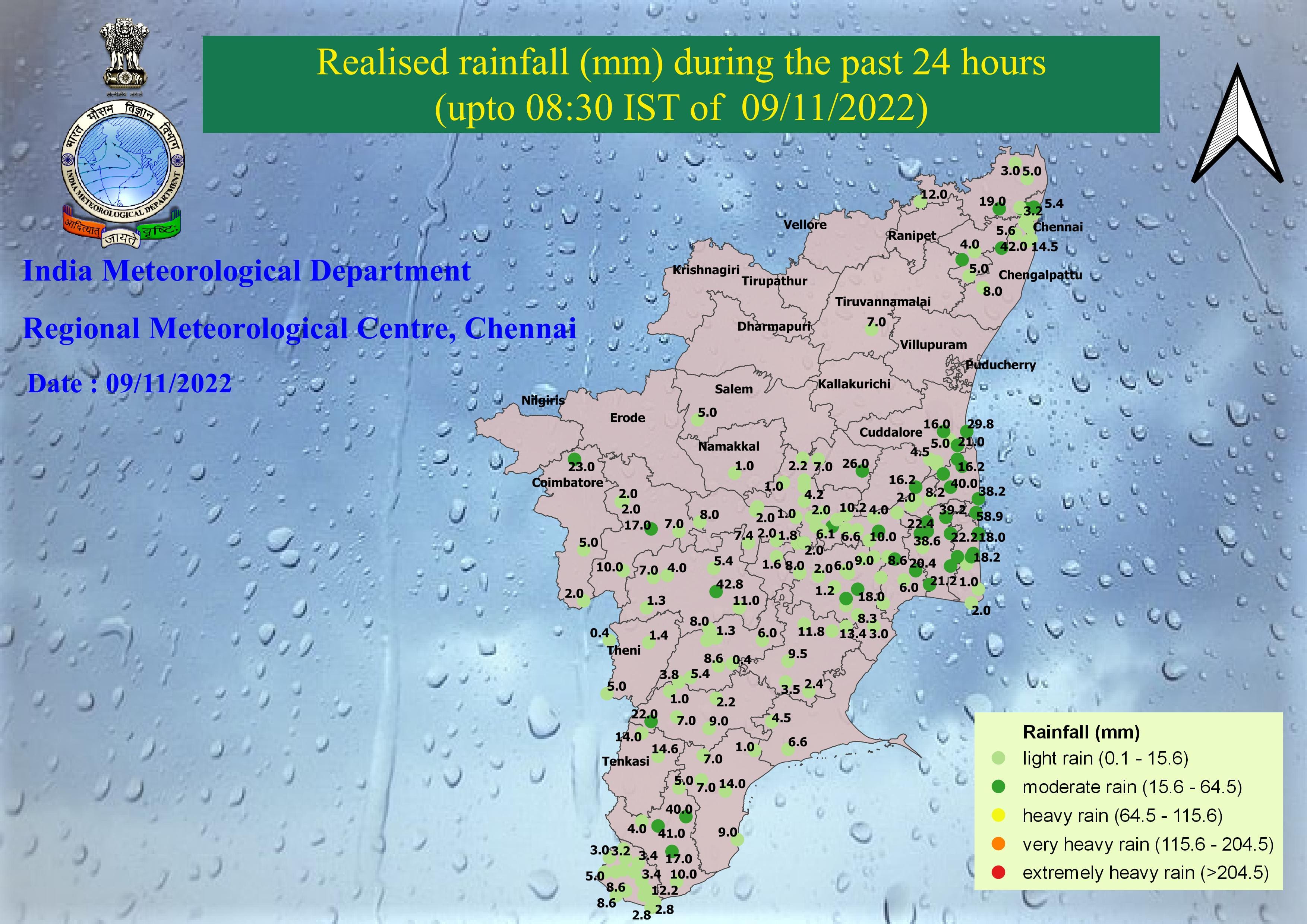 Stepping up pressure against Tamil Nadu Governor, the ruling DMK has urged President Droupadi Murmu to sack RN Ravi, alleging that he has violated the oath he took under the Constitution and levelled a series of allegations against him.
Among others, the DMK-led Secular Progressive Alliance (SPA) took exception to his “praising Sanatana Dharma” and charged Ravi with “instigating communal hatred.” The memorandum dated November 2, 2022 has been submitted with the President’s office, the DMK said on Tuesday. It was released here. Read more.
DMK on Tuesday said its-led Secular Progressive Alliance (SPA) has petitioned President Droupadi Murmu, urging the ‘sacking’ of Tamil Nadu Governor R N Ravi, with whom the ruling dispensation in the state is at loggerheads over a number of issues. In a detailed memorandum dated November 2, 2022, and submitted with the office of the President in New Delhi, the ruling alliance flagged a number of issues concerning the Governor, including the pending NEET bill and said all the acts were “unbecoming of the Governor.” The petition was signed by SPA members of Parliament.
In other news, the Tamil Nadu government on Tuesday announced convening a meeting of all legislature parties on November 12 to discuss the next course of action following the Supreme Court upholding the 10 per cent economically weaker section (EWS) quota. Chief Minister M K Stalin will chair the meeting. “This quota system is against social justice and equality and contrary to the social justice policy,” a government release said about the EWS reservation. Therefore, the meeting will discuss the next course of action on this issue.
The Tamil Nadu government plans to garner Rs 75,000 crore worth investments and generate about one lakh jobs over the next 10 years through the aerospace and defence sectors, Chief Minister M K Stalin said on Tuesday. Releasing an aerospace and defence industrial policy at the ‘Future is now-Towering Tamil Nadu’ conclave here, Stalin said the policy aims at providing enhanced support to micro, small and medium enterprises sector and start-ups in the two sectors. The mission of the policy is to create a robust, world-class, high technology efficient aerospace and defence manufacturing eco-system.
The Supreme Court judgment upholding 10 per cent reservation to people belonging to economically weaker sections (EWS) in upper caste in admissions and government jobs is a setback to the century-long social justice struggle, Tamil Nadu Chief Minister M K Stalin said on Monday.
Political parties and all like-minded organisations in Tamil Nadu should come together to protect social justice and ensure it is heard across the country, Stalin, who is the president of the ruling DMK said, reacting to the Supreme Court’s Monday judgment upholding the validity of the 103rd Constitution amendment providing 10 per cent reservation to the EWS in admissions and government jobs.
In other updates from the state: A 10-year-old female sloth bear that was tranquilised by forest department officials in the foothills of the Western Ghats in Tamil Nadu’s Tenkasi district after it attacked three men died a day later after it was released in the wild. According to forest officials, the bear died due to a lung infection.
The bear first attacked Vaigundamani of Karuthalingapuram village while he was on his way to Pethanpillai Kudiyiruppu on his two-wheeler to sell snacks on Sunday morning. Two other men, Sailappan and his brother Nagenthiran, were also attacked when they tried to rescue Vaigundamani.
A video of the bear furiously biting a man and people around it screaming and trying to scare it off had gone viral on social media.
The Chennai Metro Rail Limited (CMRL) has announced that stations in Phase-I of the Metro network will be beautified based on themes reflecting the city’s rich art and cultural history.
According to officials, the themes will be a compilation of photographs, murals, and sculptures. The officers are also discussing the possibility of including themes based on popular Tamil films.
“We are discussing what we can do… we can’t really say anything in detail as it is still very early… We have planned to provide a new look to the stations in Phase-I and later, stations in Phase-II will be beautified as well. Initially, we are looking to beautify Puratchi Thalaivar Dr MGR Central, Airport, and Alandur metro stations,” a senior CMRL official said.