Covid-19 Live News Updates:  India reported 18,815 new coronavirus cases in the last 24 hours, pushing the overall caseload to 4,35,85,554, according to the latest data released by the Union Ministry of Health and Family Welfare. Meanwhile, the death toll rose to 5,25,34, with 38 new fatalities.
The Union health ministry on Wednesday reduced the gap between the second dose and the precaution third dose of the Covid-19 vaccine from nine months to six months. On Wednesday, Union Health Secretary Rajesh Bhushan wrote to the states that a decision has been taken to administer the precaution third dose to the adult population after completion of six months or 26 weeks from the date of administration of the second dose. At present, precaution dose is available free of cost at government vaccination centres to the priority groups -the frontline workers, healthcare workers, and the elderly population aged above 60 years. For those aged 18-59, the precaution dose is available only at private vaccination centres.
In a separate development, amid a surge in Covid-19 cases in Maharashtra, there has been no Covid-related death in Mumbai in the past 22 days. For the second day, the number of new Covid cases in the city was below 700. A day after reporting 659 cases, the city reported 695 cases on Wednesday. Also, Delhi reported 600 Covid-19 cases and one fatality due to the viral infection while the test positivity rate declined to 3.27 per cent, according to the data shared by the health department here on Wednesday. With the fresh cases and fatalities, Delhi”s Covid tally has climbed to 19,38,648 and the death toll has shot up to 26,276, the department said in a bulletin.
Delhi recorded 531 new Covid-19 cases in the last 24 hours. With 16,956 tests the positivity rate stands at 3.13%.
Gujarat registered 636 COVID-19 cases in 24 hours, taking the tally to 12,36,707, while the death toll remained unchanged at 10,948, a state health department official said on Friday. (PTI)
New Covid-19 cases in Karnataka were 1,037 in number whereas the capital city logged 932 new cases. With this, the active cases in the state and Bengaluru are 6,506 and 6,062 respectively.
West Bengal Education Minister Bratya Basu on Friday said the state government is not immediately planning to close schools and colleges, as COVID-19 cases continue to rise exponentially in the state.
Speaking to reporters, he said a decision on this will be taken on the advice of the Health Department. (PTI)
Maharashtra on Friday reported 2,944 new COVID-19 cases, up by 266 from a day ago, and seven more deaths linked to the infection, taking the state’s overall tally to 79,98,673 and the toll to 1,47,971, a health department official said. (PTI)
Sikkim reported 29 fresh COVID-19 cases, raising the tally in the northeastern state to 39,342, an official bulletin said on Friday. (PTI)
The highly transmissible Omicron BA.2.75 sub-variant was first detected in India and then in ten other countries, according to the World Health Organisation (WHO). Whether or not it is clinically severe is yet to be determined but preliminary studies here are showing mild disease, Dr Rajesh Karyakarte tells Anuradha Mascarenhas read more here
The Mudiya Poono fair, also known as mini-kumbh, begins in Uttar Pradesh after a hiatus of two years due to the COVID-19 pandemic. (PTI)
Odisha reported 470 new COVID-19 cases on Friday, the highest in nearly five months, as per Health Department data.
The active cases rose to 2,487, while 49 children were among those found infected in the last 24 hours. (PTI)
Four fresh Covid infections were reported in Ladakh in a day, taking the case tally in the Union territory to 28,543, officials said on Friday.
All the new cases were reported from Leh. Also, six people have recuperated from the disease and discharged from a hospital in Leh, taking the total number of recoveries to 28,190. (PTI)
The Chinese capital Beijing appears to have backed off a plan to launch a vaccine mandate for entry into certain public spaces after pushback from residents.While not explicitly saying it had dropped the plan, a city official was quoted in state media late Thursday saying that people could enter venues with a negative virus test result and a temperature check, as has been the norm.

They also said vaccinations would continue on the principle of “informed, voluntary consent.”An unidentified official in the pandemic control office said residents of the city could enter any sort of public venue with a negative PCR test done in the last 72 hours and a temperature check, according to a short question and answer post from the official Beijing Daily, the main paper of the city government, published late Thursday night.

The city announced Wednesday that starting next week, people had to show proof of Covid-19 vaccination before they can enter some public spaces including gyms, museums and libraries. It drew intense discussion as city residents worried how the sudden policy announcement would disrupt their lives. A phone call to the Beijing government’s press office to confirm the policy change did not go through. The phone had been set to “do not disturb” mode according to a recorded message. Online and offline, some criticized the policy, worrying that it would force those who weren’t vaccinated to get the shots, or lose out on access to many public spaces. (AP)
i, Jul 8 (PTI) India saw a single day rise of 18,815 new coronavirus infections, taking the tally of Covid-19 cases to 4,35,85,554, while the active cases increased to 1,22,335, according to the Union health ministry data updated on Friday.

The death toll has climbed to 5,25,343 with 38 new fatalities, the data updated at 8 am showed. The active cases comprise 0.28 per cent of the total infections, while the national Covid-19 recovery rate was recorded at 98.51 per cent, the health ministry said. An increase of 2,878 cases has been recorded in the active Covid-19 caseload in a span of 24 hours.

The daily positivity rate was recorded at 4.96 per cent while the weekly positivity rate was 4.09 per cent, according to the health ministry. The number of people who have recuperated from the disease surged to 4,29,37,876 while the case fatality rate was recorded at 1.21 per cent. According to the ministry, 198.51 crore doses of Covid vaccine have been administered in the country so far under the nationwide vaccination drive. India’s Covid-19 tally had crossed the 20-lakh mark on August 7, 2020, 30 lakh on August 23, 40 lakh on September 5 and 50 lakh on September 16. 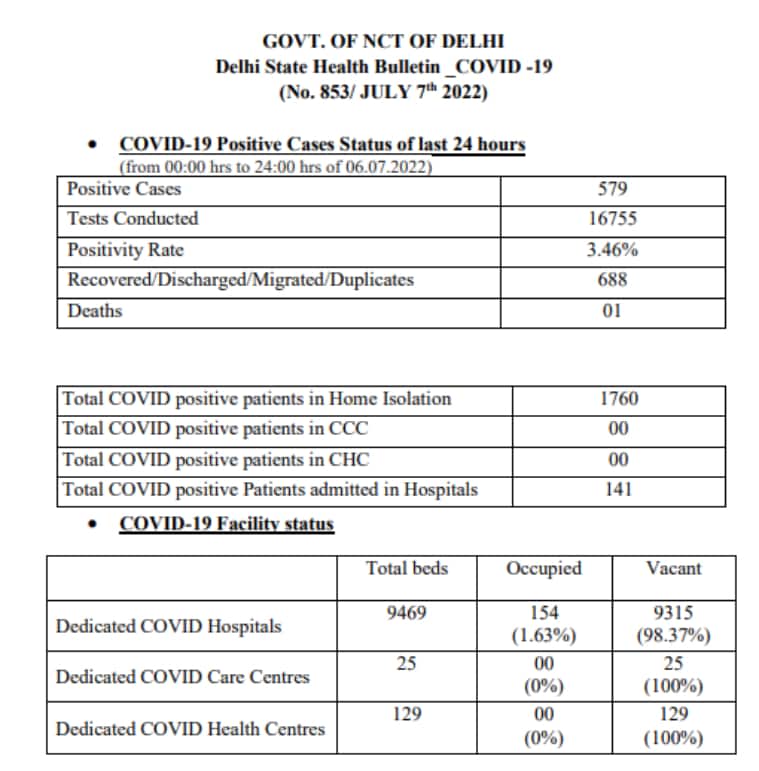 A senior official at the European Union medicines agency said Thursday that many nations in the bloc are seeing a new wave of Covid-19, driven by highly-transmissible mutations of the omicron variant. The European Medicines Agency’s Marco Cavaleri told an online briefing that the BA.4 and BA.5 mutations are expected to become dominant across the continent, “likely replacing all other variants by the end of July”.
He said that while there is no evidence the variants make people more sick than earlier strains of the virus, “the increase in transmission among older age groups is starting to translate into severe disease”. In April, the EMA advised people aged 80 and above to get a second vaccine booster. Cavaleri said that second booster doses are now being advised for people in the EU aged from 60-79 years and “medically vulnerable persons of any age”.
“As this new wave is unfolding over the EU, it is essential to maintain protection of vulnerable groups and avoid any postponement of vaccination,” he said. (AP)
Karnataka on Thursday reported 1053 new Covid-19 cases, zero fatalities with a psoitivity rate of 3.88 per cent. Bengaluru alone logged 966 fresh infections. The state currently has 6,454 active Coronavirus cases. (ENS)
Mumbai on Thursday reported 540 new coronavirus cases, down by 155 from a day ago, while two more patients succumbed to the infection, the city civic body said. With these additions, the overall Covid-19 tally rose to 11,17,367, while the death toll jumped to 19,622, said the Brihanmumbai Municipal Corporation (BMC) in a bulletin. The city’s positivity rate, or cases detected per 100 tests, stood at 5.43 per cent.
This was the seventh day in a row when Mumbai’s daily Covid-19 case count remained below the 1,000-mark, while the number of active cases slipped under 5,000. The city logged 155 fewer COVID-19 cases compared to Wednesday, when it had reported 695 infections, but no fresh fatality linked to the respiratory illness. (PTI)
Sikkim reported 29 new Covid-19 cases in the last 24 hours, taking the tally to 39,313, a health department bulletin said on Thursday. East Sikkim district registered 24 new cases followed by four in South Sikkim and one in North Sikkim district, it said.
The daily COVID-19 positivity rate was 15.5 per cent as the 29 new cases were detected out of 186 samples tested. The Himalayan state now has 82 active Covid-19 cases, while 38,019 persons have recovered from coronavirus and 757 others have migrated to other states. (PTI)
Odisha recorded 428 fresh Covid-19 cases on Thursday, 27 more than the previous day, taking the tally to 12,91,946, the health department said. This is the highest daily rise since February 22, when the single-day spike figure was the same. The coronavirus death toll remained unchanged at 9,126.
Odisha now has 2,235 active cases, while a total of 12,80,532 people have recovered from the disease so far, the department said. Khurda, where capital Bhubaneswar is situated, reported the highest number of 183 infections, followed by 88 in Cuttack. The state’s positivity rate stood at 2.44 per cent, with the fresh cases being detected out of 17,522 samples that were tested in the past 24 hours, it added. (PTI)
Andaman and Nicobar Islands reported nine new Covid-19 cases, one less than the previous day, with the tally rising to 10,212, a health department official said on Thursday. Two fresh patients have travel history, while seven infections were detected during contact tracing, he said. The Union Territory now has 38 active patients, and all of them are undergoing home quarantine. Eleven people recuperated from the disease on Wednesday, taking the total number of recoveries in the archipelago to 10,045. The death toll remained at 129 as no new fatality due to the infection was reported in the last 24 hours, the official said. (PTI)
COVID-19 can be very debilitating on your system and getting back to your exercise routine after a bout of infection may require some time. If you don’t allow your body the time to rest and heal, it can weaken you further and eventually lead to a re-injury or relapse. And since the post-COVID 19 phase comes with its own set of complications — particularly myocarditis (inflammation of the heart muscle) for long haulers — one needs to be careful. No matter what your age or your fitness level, discuss with your doctor before resuming your activity.
The current wave of Covid-19 highlights a high risk of reinfection by the Omicron variant of SARS-CoV-2. Why is this? Researchers analysed the antibody neutralisation capacity of 120 people infected with the original SARS-CoV-2 strain, or with the Alpha, Beta, Gamma, Delta, Zeta or Omicron (sub-variant BA.1) variants. They found that unlike its predecessors, Omicron appears to be able to evade the antibodies generated by all other variants, the University of Geneva said in a press release. The researchers, from the University’s Centre for Emerging Viral Diseases, and the Geneva University Hospital, have published their findings in Nature Communications.