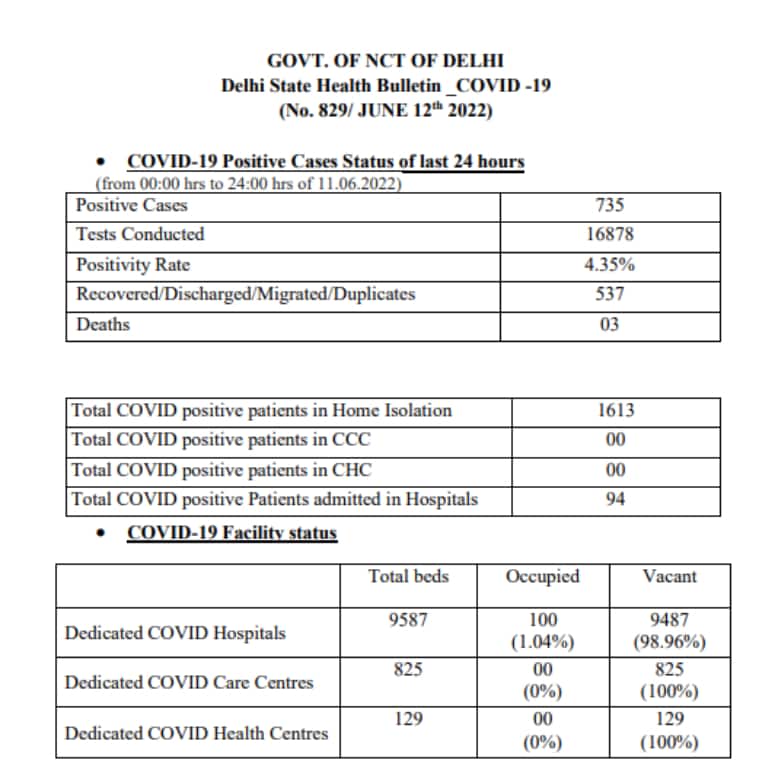 Delhi had reported 899 coronavirus cases and four deaths on May 13, when the positivity rate was at 3.34 per cent, according to official figures. The capital had on Saturday reported 795 COVID-19 cases with a positivity rate of 4.11 per cent and zero daily deaths. The COVID-19 positivity rate has gone past the four per cent-mark again after nearly a month. (PTI)
All but one of the weather stations in the national capital recorded maximum temperatures above 44 degrees Celsius on Sunday, as hot and dry westerlies swept across northwest India. The Safdarjung Observatory, Delhi’s base station, recorded a maximum temperature of 43.9 degrees Celsius, four notches above normal.
The maximum temperature settled at 46.7 degrees Celsius at the Sports Complex automatic weather station near the Akshardham temple, making it the hottest place in the city. Najafgarh, Mungeshpur, Pitampura, and Ridge stations recorded a high of 46.4 degrees Celsius, 46.2 degrees Celsius, 45.8 degrees Celsius and 45.8 degrees Celsius, respectively.
The India Meteorological Department (IMD) has issued a yellow alert, warning of a heatwave in parts of Delhi on Monday. The IMD uses four colour codes for weather warnings — green (no action needed), yellow (watch and stay updated), orange (be prepared) and red (take action). (PTI)
Delhi Lt Governor V K Saxena, along with Chief Minister Arvind Kejriwal and Deputy CM Manish Sisodia, on Sunday visited the Asola-Bhatti Mines forest area and directed officials to prepare a master plan for developing the area into a world class eco-tourism destination, said an official statement.
Saxena directed the officials to prepare within 30 days a master plan for developing the large abundant pits into reservoirs for collecting rain, flood and storm water, recharging groundwater and enhancing the area into a world class eco-tourism destination, the statement added. The move comes after the LG’s earlier visit on May 31.
The master plan will be prepared by a committee of officers of the concerned departments in consultation with experts and institutions. The eco-tourism component of the master plan will include provisions of creating butterfly trails, wildlife trails, cycle tracks, walking tracks, bird-watching spots and ropeways, amongst others. (PTI)
Traders with shops at Rani Jhansi market, which saw many shops gutting in an early Sunday morning fire, claim that the blaze could have been controlled much faster if it had broken out during the day. Dharampal Arora, the president of Rani Jhansi market, claimed that all shopkeepers in the area stock fire extinguishing equipment, but the fire broke out in the early morning when it was close, and that made all the difference.
A massive fire broke out in the Rani Jhansi shoe market in central Delhi’s Karol Bagh area, which took five hours to be put out, a senior fire service official said. The fire was first spotted by a security guard at the market, who informed the traders’ association president about the incident.
“Our guard, Kamal Dev, saw the fire first and informed us about it around 4.15 am. We called the fire department and the police and immediately reached the market at 4.30 am,” Arora said. “The fire had spread wide when we reached here, but the fire officials brought it under control. I also have a footwear shop here and, luckily, it is safe,” he said. (PTI)
Russia deeply cherishes the equal and respectful relations with India and the multidimensional cooperation between the two strategic partners is one of the world’s “most elaborate” ones, Russian Ambassador Denis Alipov has said. The envoy has also said that the positions of the two countries on “core issues remain similar or coinciding”.
Alipov made the comments in the Russia Digest magazine on the occasion of the 75th year of the establishment of diplomatic relations between the two countries. He also said the delivery of S-400 air defence missile systems to India is proceeding well in accordance with the schedule.
“Russia deeply cherishes equal and respectful relations with India. Our cooperation plays the role of a defining factor for global peace, stability and sustainable development,” Alipov said. (PTI)
Congress president Sonia Gandhi, 75, was Sunday rushed to the emergency department of Sir Ganga Ram Hospital in Delhi “owing to Covid related issues”, the party spokesperson Randeep Surjewala said. She is in a stable condition, according to sources at the hospital.
“Congress President, Smt. Sonia Gandhi was admitted to Ganga Ram Hospital today owing to Covid related issues. She is stable and will be kept at the hospital for observation. We thank all the Congress men & women as also all well wishers for their concern and good wishes,” tweeted Surjewala. (Read more)
Congress President, Smt. Sonia Gandhi was admitted to Ganga Ram Hospital today owing to Covid related issues. She is stable and will be kept at the hospital for observation.

We thank all the Congress men & women as also all well wishers for their concern and good wishes.

This is the second such drive this week. Officials from Work Circle-9, along with irrigation department officials, oversaw the drive accompanied by 150 junior officials and police personnel. Five JCB machines and three dumper trucks were used in the demolition process, officials said, adding that the land on which the illegal colonies/farmhouses are built is worth approximately Rs 60 crore. Read more.
In pursuance of the Digital India initiative, the Municipal Corporation of Delhi (MCD) has decided to discontinue the practice of manual correspondence or delivery of certificates related to changing of names, the civic body said on Saturday. The practise has been discontinued with effect from June 6, the MCD said in a statement.
With this, the MCD aims to bring more transparency and accountability in the process, said a senior official of the civic body. The certificate can be downloaded by the general public on the MCD website (mcdonline.nic.in) which is a QR code-enabled computer-generated certificate requiring no signature. Read more.
A massive fire broke out at Gaffar Market in Central Delhi’s Karol Bagh area early on Sunday morning, said officials of the Delhi Fire Services (DFS). According to the officials, the fire was located in a shoe market in Gaffar Market.