Garth played 85 times for Ireland after making her debut as a 14-year-old in 2010, but she moved to Australia a decade later to take up a contract with Victoria

Former Ireland allrounder Kim Garth has moved closer to a second international debut after receiving her first call-up by Australia for their T20I tour of India.
Garth played 85 times for Ireland after making her debut as a 14-year-old in 2010, but she moved to Australia a decade later to take up a contract with Victoria.
In 2021, she received permanent residency and earlier this year – after completing a three-year period since her final appearance for Ireland – she became eligible to represent her new home.
She took 12 wickets for Melbourne Stars in this season’s Women’s Big Bash, having been their leading wicket-taker in the previous edition.
Garth, 26, is one of several intriguing names in a squad missing Meg Lanning, whose indefinite break from the game continues, and Rachael Haynes, who played the final match of her career on Sunday for Sydney Thunder. 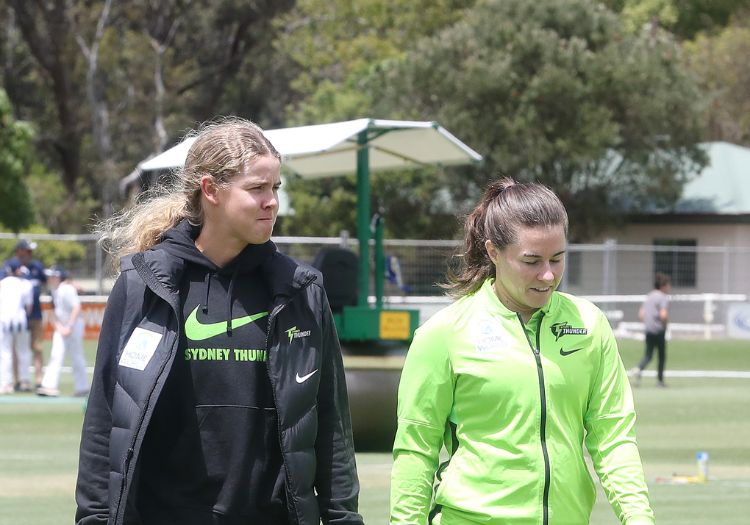 Phoebe Litchfield, pictured alongside Tammy Beaumont, has earned her first call-up (Sarah Reed/Getty Images)
Phoebe Litchfield is one beneficiary; the 19-year-old has been touted for an international berth since her WBBL debut three years ago and effectively replaces Haynes, a teammate and mentor with Thunder.
Heather Graham, who has one ODI appearance to her name and was a travelling reserve during this year’s 50-over World Cup, has been rewarded for a fine season with Hobart Hurricanes, while fellow allrounder Tahlia McGrath has been named as vice-captain to Alyssa Healy for the five-match series.
Amanda-Jade Wellington also misses out, which comes as some surprise, given the potential for spinning surfaces in Mumbai. But with Australia essentially putting final touches to their preparation for next year’s T20 World Cup in South Africa, they have all bases covered perhaps barring a left-arm seamer.
Melbourne Renegades trio Georgia Wareham, Sophie Molineux and Tayla Vlaeminck all remain absent with long-term injuries.
County Championship

Welcome to www.thecricketer.com – the online home of the world’s oldest cricket magazine. Breaking news, interviews, opinion and cricket goodness from every corner of our beautiful sport, from village green to national arena.