Today’s E-Paper
E-Paper
Updated on: 24 July,2022 08:08 AM IST &nbsp|&nbsp Mumbai
Heena Khandelwal | [email protected]
After study highlights discrimination against Indian Muslim women in entry-level jobs market, experts say sensitisation is key to ensuring inclusivity policy is not token effort. P22
Dr Syeda Ruksheda, a practising psychiatrist and psychotherapist, says she wasn’t allowed to participate in a morning show of a Hindi news channel, because she wore a hijab. “[Such bias] It limits the options and reduces the space we can occupy. Women end up feeling that they can’t do this because of who they are and who they choose to be seen as,” she says

For Mumbai resident Dr Syeda Ruksheda, the hijab is very much part of her identity. A practising psychiatrist and psychotherapist for over two decades now, Ruksheda doesn’t shy away from wearing her faith on her sleeve, even though, she admits, being discriminated against professionally.
This realisation dawned on her quite early on in her career, when 12 years ago, a production house that was looking for a mental health expert for a morning show of a Hindi news channel, refused to entertain her. “We spoke over the phone. They were happy to learn that I was well versed in Hindi and asked me to visit the studio for the show,” recalls Ruksheda. “But, when I went there the following day, they seemed a little taken aback.” One of the first things they asked her was if she would remove her hijab. Ruksheda declined politely, but that incident left a bad taste in her mouth. 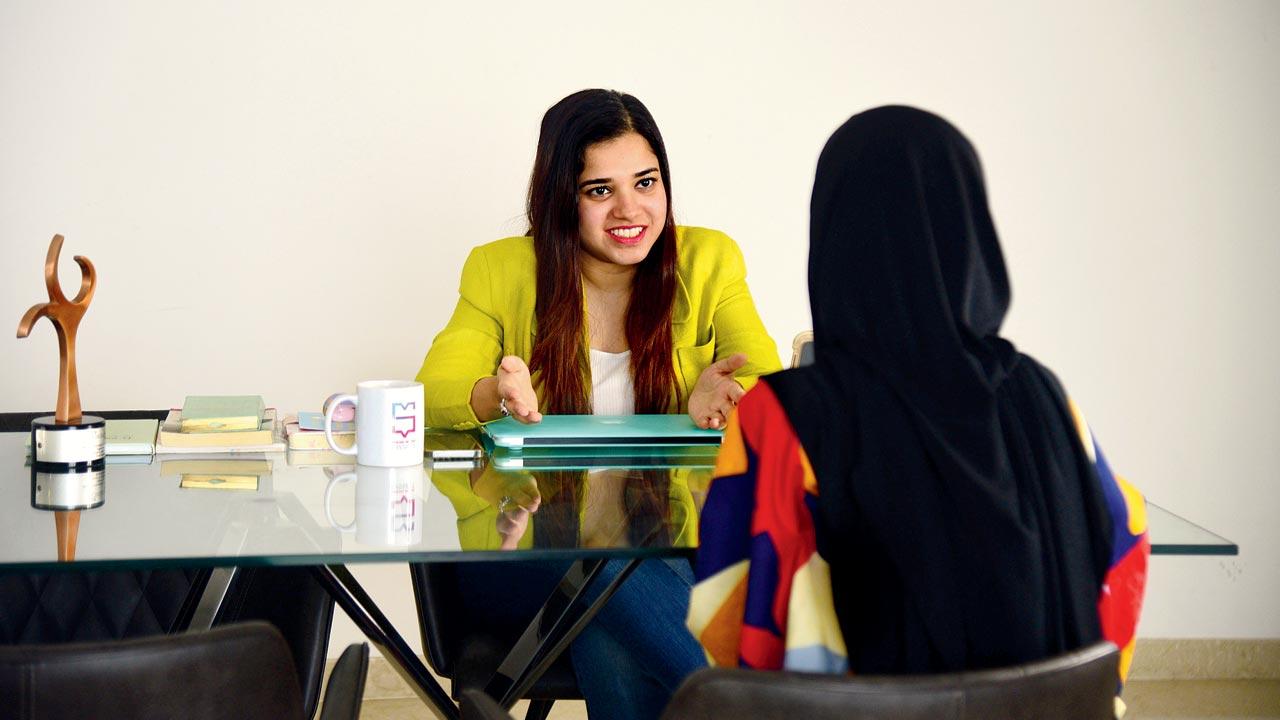 Aleena Gandhi, who alleges that she was denied a job because of her faith, now runs her own digital marketing and content company, Social Media Dissect, which also has employed hijabi Muslim women.  Pic/Pradeep Dhivar
Another 42-year-old female PR professional, who is Muslim, claims her religion came in the way of securing a job with a leading multi-speciality hospital in Mumbai. This was in 2019. “I applied and cleared multiple rounds of interviews with the HR and managers… I even presented a plan. To be honest, it was one of my best interviews. The final round was with the CEO, who was also impressed with my action plan. Somewhere during our conversation, he asked me my name and everything went south after that. His tone suddenly became condescending with each idea of mine being shot down. There was no communication afterwards. Later, someone else was hired,” she shares anonymously.
Dr Ruha Shadab, founder and CEO, Led By Foundation, an organisation focused on the economic empowerment of Indian Muslim women, says she’d heard many anecdotal accounts about such prevalent biases. “And, while we have had socio-economic indicators showing the lack of participation and inclusion, we neither had any data to quantify these experiences nor was there enough to identify the root cause barriers,” she says over a phone call. A new study,  Hiring Biases, funded by Led By Foundation and Maulana Azad National Urdu University in collaboration with Centre for Development of Policy and Practice, attempts to identify the bias in the hiring process disadvantaging Indian Muslim women and the extent to which it affects those seeking entry level jobs. 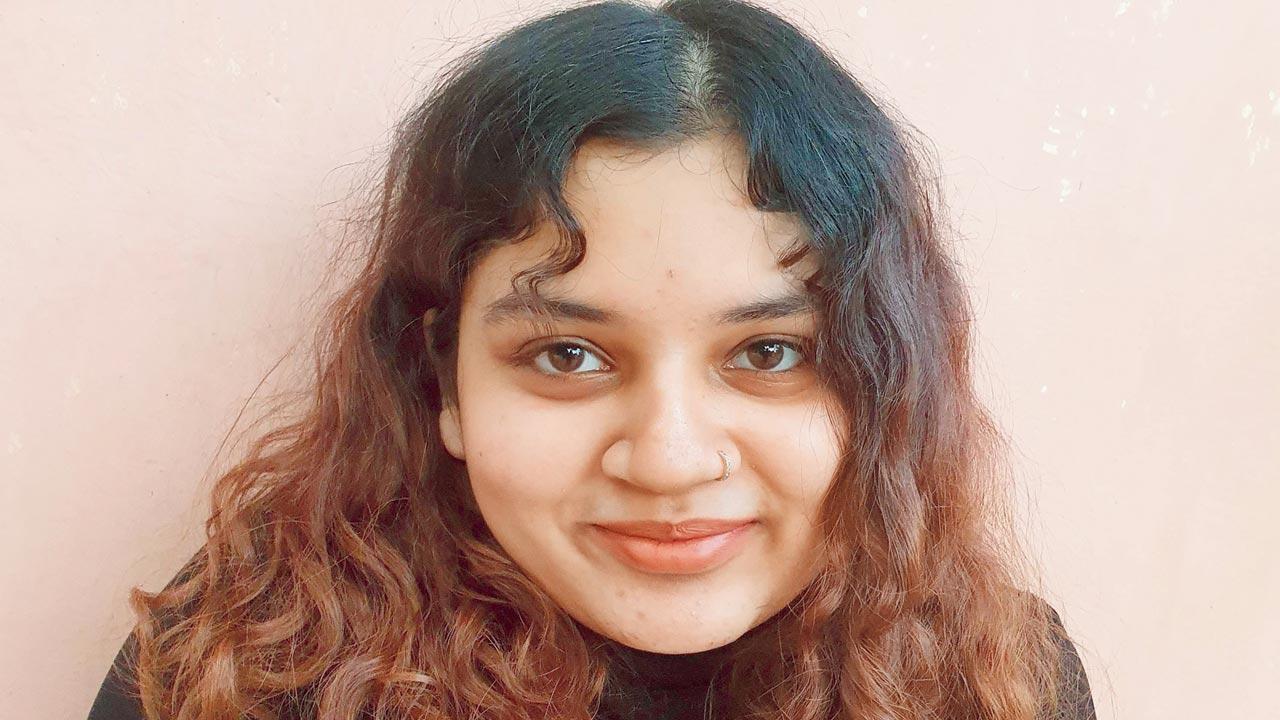 Vanshika Sharan, lead researcher
For the research, resumes of two women were prepared—one belonging to Habiba Ali and the other, Priyanka Sharma. Both these resumes were comparable in achievements, with similar rankings colleges, and internships and work experiences that mirrored each other. The researchers used these fictional resumes to apply to over 1,000 entry level jobs over a period of eight months. The findings highlighted that the hiring process displayed a net discrimination rate of 47.1 per cent. The rate is worst in south India, which showed the discrimination rate of 60 per cent followed by west India and north India at 59.3 and 39.5 per cent, respectively. The biggest revelation, says lead researcher Vanshika Sharan, was the extent of discrimination. “We expected there to be disparity, but the findings revealed a discrimination of up to 50 per cent, which was shocking. The way the recruiters were interacting and responding to them and the difference in enthusiasm with which some of these recruiters pursued them was also news to us.”
For instance, she says, Priyanka would receive a lot of calls, while Habiba would largely receive texts on her phone or messages on LinkedIn. “In cases where Habiba did receive calls, she wouldn’t be pursued as actively. Half way through the research, we even switched their resume and still received the same response.” 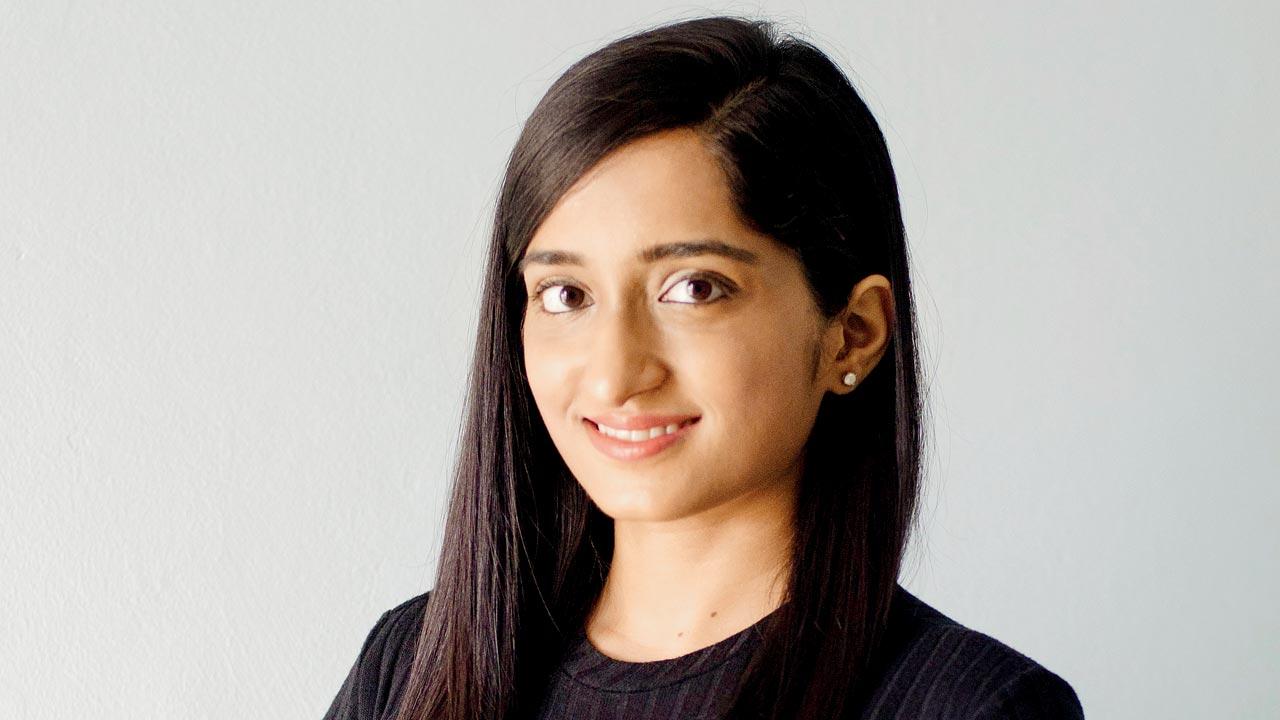 Dr Ruha Shadab, founder and CEO of Led By Foundation, says the study’s aim was to gather data to quantify the biases against Muslim women and identify the root cause barriers
Muslim hijabi women usually face the most discrimination. Chennai-based Bibi Rukhia, 47, who is currently working as HR manager at KelpHR, an organisation that provides HR solutions to other organisations, helping improve workplace culture across the board, remembers losing out on a role at a multinational company, because she wore a hijab. “I spoke to the HR and managers over the phone and everything was finalised. I was asked to drop by the office to complete the formalities, but the moment they saw me in a hijab, things changed. There was no communication afterwards,” she remembers.
Another 31-year-old media professional, who recently moved from Lucknow to Mumbai, and had started applying for jobs in the city, was advised by her sibling who works in the social sector to avoid placing her photograph in the CV, because of her hijab. “She told me that I would get rejected in the first go,” she shares.
Smita Shetty Kapoor, CEO and co-founder, KelpHR, shares how a friend, a Muslim woman, who works in the finance industry, had to mask her identity to climb the ladder. “She is a client relationship manager, and is quite successful. I asked her once how she managed to ace it and she said, ‘It’s difficult for women [to succeed] in any case.  I am married to a Hindu, so I use his surname’.” 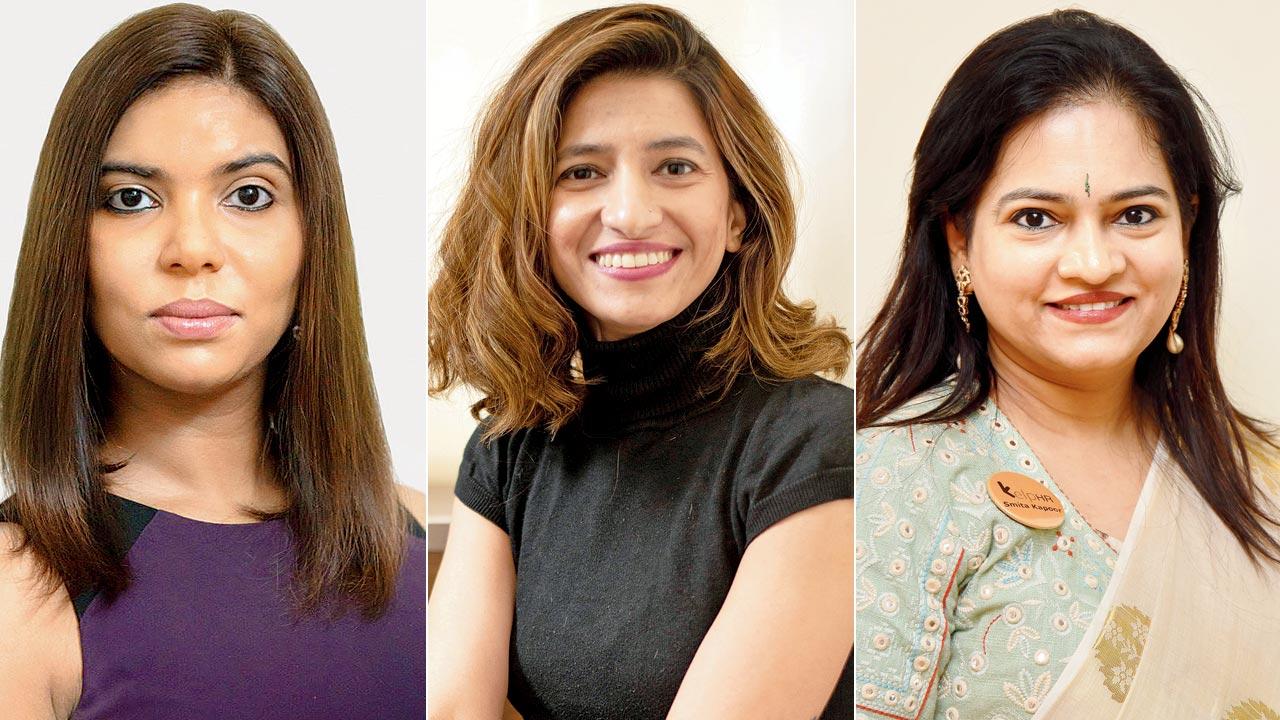 Deepanjali Lahiri; Lizanne Dsouza and Smita Shetty Kapoor
Discrimination of any sort isn’t a nice feeling, observes Ruksheda, adding that in cases like these, it leads to fear and anxiety, disempowering women further. “It limits the options and reduces the space we can occupy. Women end up feeling that they can’t do this because of who they are and who they choose to be seen as.”
At present, there are approximately 70 million educated Muslim women in the country. According to the last National Sample Survey Organisation (2009-10), for every 1,000 women in the labour force, only 101 women were Muslim. “This sort of bias doesn’t happen in isolation. Muslim women face it at several points, like when they are denied a place on rent because of their identity. However, it does surprise us because we’ve been told again and again that if you get educated, you won’t end up being a puncturewala [a person who fixes tyres, often used as an offensive slur]. Here I am, an educated person and I still don’t have a chance… that leaves you with a sense of betrayal,” shares Ruksheda, adding, that some  patients recommended to her by other doctors asked if they could instead see a Hindu psychiatrist.
Lizanne Dsouza is the founder of Liz Lyn Careers, a Mumbai-based recruitment and HR services agency. According to her, while new age companies and startups are more open to having people from different backgrounds, discrimination is visible in family-owned businesses like restaurants or client-facing jobs even at high-end stores. “When it comes to traditional companies like a Gujarati or Marwari family-run business, people feel that a hiree from a particular religion would be more suitable for the job that they are looking for. In industries like fashion and lifestyle, which are more client-facing, if a person is wearing a hijab, it is usually seen as an issue.”
Dsouza says that though this discrimination isn’t evident, it’s usually wrapped up in corporate jargon. “People hiring for high-end brands tell us that their client-facing employees have a dress code that they need to follow [and hijab is not a part of it]. Others say that they don’t want people to pray five times in the office because it wastes a lot of time or that their company offers only pure vegetarian food in the cafeteria and thus, it won’t be suitable for people from other religions. There is always a reason why they ‘can’t’ hire a person from a particular religion,” she adds.
A similar reason was given to Mumbai-based Aleena Gandhi when she was looking for a job a few years ago. “I was interviewing for a social media agency in 2018 when during the interview, I was asked about my religion. When I told them I was Muslim, they asked me if I was religious. I am not someone who prays five times a day, but this question was a red flag. I asked them what it had to do with my job, and it was then that I was told that if they would hire a Muslim who is religious, it would mean loss of working hours. I didn’t get that job,” says Gandhi, who now runs her own digital marketing and content company, Social Media Dissect. “Today I have a team of 35 people who come from diverse backgrounds.” As a Muslim, she says she’s most likely to “understand other Muslim women, and accommodate their needs”.
Deepanjali Lahiri, COO, Led By Foundation, feels that there’s an urgent need for sensitisation programmes that focus on “religious or ethnic diversity”. “The diversity programmes, as they exist, are centred around gender or sexual orientation. Diversity is an entire spectrum, which organisations aren’t looking at,” she observes. She suggests a “blind hiring process” where recruiters remove identifiers like names. “The recruitment and interview panels should be diverse. Create safe spaces and address the problem, bring it to the forefront and to the boardrooms,” suggests Shadab.
60 per cent
The discrimination rate against Muslim women in south India, according to the Hiring Biases study
101
No. of Muslim women for every 1,000 women in the labour force, as per the National Sample Survey Organisation (2009-10)
47.1 per cent
Net discrimination rate against Muslim women, according to the Hiring Biases study
.  Introduce a ‘blind’ hiring process that strips all non-essential candidate information such as name, schools, and ages etc from the job application, preventing unconscious bias from creeping in at the initial screening stages
.  Incorporate a sample test stage in the hiring process to standardise the recruitment process
.  Ensure that there is a diverse recruitment panel (in terms of gender, ethnicity, socio-economic background and age) doing the hiring
. Roll out targeted diversity, equity and inclusion (DEI) goals and position current employees, from both majority and minority groups as the DEI champions to drive the change collectively
Courtesy: Led By Foundation