India’s gravest socio-economic problem is the difficulty a vast majority of citizens have in earning good livelihoods. Their problem is not just employment. It is the poor quality of employment — insufficient and uncertain incomes, and poor working conditions, wherever they are employed.
The dominant “theory-in-use” to increase employment is to improve the ease of doing business, with the expectation that investments in businesses will improve citizens’ ease of earning good livelihoods. In this theory, large and formal enterprises create good jobs, and labour laws must be “flexible” to attract investments. Investors say the laws protect labour too much. Reforms were begun by the UPA government. Their principal thrust was to improve administration by simplifying procedures and digitisation. Those improvements were appreciated by employers as well as workers. However, they did not make the labour laws more employer-friendly. Therefore, the NDA government became bolder in 2014 and moved to reform the content of the laws.
The government designed a framework for reforms and, since labour is a state subject, it encouraged states to implement changes. First off the blocks was Rajasthan. Other states followed. Economic reforms are a process of learning. The V V Giri National Labour Institute’s interim report, “Impact Assessment Study of the Labour Reforms undertaken by the States”, provides insights into the impacts of the reforms so far. Labour laws cover many subjects — payment of wages, safety conditions, social security, terms of employment, and dispute resolution. The report has focused on the reform of the Industrial Disputes Act, which is to raise the limits of applicability of laws relating to terms of service and modes of dispute resolution (roles of unions) to 300 persons.
The report spans the period 2004-05 to 2018-19. It focuses on six states that have implemented reforms: Rajasthan, Maharashtra, Andhra Pradesh, Tamil Nadu, Jharkhand, and Uttar Pradesh. The report reminds readers that labour laws are the only one factor affecting business investment decisions. Investors don’t go out to hire people just because it has become easy to fire them. An enterprise must have a growing market for its products, and many things must be put together to produce for the market — capital, machinery, materials, land, etc. not just labour. Therefore, it must be worthwhile to employ more people before firing them!
Reading through the report, one conclusion is unmistakable. Reforms of labour laws have had little effect on increasing employment in large enterprises. The report says that the effects of labour reforms cannot be revealed immediately — they will take time. Therefore, it is telling that Rajasthan, the first state to implement the reforms, seems to have benefitted the least from them.
The overall story is hardly better. The share of employment in plants employing more than 300 persons increased from 51.1 per cent to 55.3 per cent between 2010-11 to 2014-15, the period when the emphasis was on administrative reforms, and then increased less, from 55.3 per cent to 56.3 per cent, in 2017-18, when some states made the bolder reforms favourable for employers. Though overall employment is affected by many factors, the bolder reforms post-2014 were designed to promote larger factories. This hardly happened because labour reforms that increase the threshold of application of the Industrial Disputes Act are conceptually flawed. They cannot induce the creation of large enterprises to whom the laws will continue to apply. In fact, the report says, employment in formal enterprises is becoming more informal. Large investors can afford to use more capital and are also employing increasing numbers of people on short-term contracts, while perversely demanding more flexibility in laws!
The report defines “formal” employment as the grant of paid leave, a written contract, and some “social security”. An enterprise should not have to employ more than 300 persons before it provides these benefits. Along with the right to be heard and dignity at work, these are the minimal “essentials” all employers must provide to all those who work for them, whether in small enterprises or domestic help. Increasing the threshold of the laws dilutes the rights of association and representation of workers in small enterprises.
The question the report leaves unanswered is whether the reforms have benefited workers. After all, the primary purpose of labour laws is to protect workers, not promote the interests of investors. Surely, the benefits of reforms should be assessed from workers’ perspectives too. Sadly, the report includes a long chapter on the views of employer associations about the benefits of the reforms and nothing about the views of employees and unions. The employers’ associations say the reforms have been beneficial. The question is, beneficial for whom?
Rising above the analysis of numbers and trends of employment in the report to see the big picture again, the conclusion is clear. The gap between where our economy is and where it needs to be is increasing. Between 1980 and 1990, every one per cent of GDP growth generated roughly two lakh new jobs; between 1990 to 2000, it decreased to one lakh jobs for every per cent growth; and from 2000 to 2010, it fell to half a lakh only (From Praveen Chakravarty’s article in The Hindu: Whose GDP is it anyway?). Fundamental reforms are required in the theory of economic growth — more GDP does not automatically produce more incomes at the bottom. And the paradigm driving employment and labour policies must also change to enable the generation of better-quality livelihoods for Indian citizens now and in the future.
To achieve this, a fundamental reform is required in the ways policies are made. If the benefit of reforms is supposed to be the improvement of all citizens’ ease of earning better livelihoods and with more dignity, whether they are farmers, factory workers, or service employees, should they not be listened to, most of all, within their enterprises, and in the process of shaping policies?
The writer is a former member of the Planning Commission and author of Transforming Capitalism: Improving the World for Everyone
Government does well to do away with price restrictions in the aviation sector 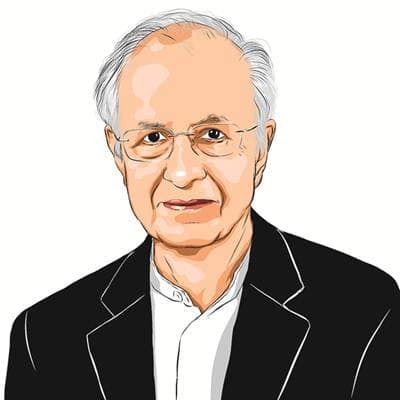 Arun MairaMaira, a former member of the Planning Commission, is the author of Li… read more