Bengaluru News: Highlights: Karnataka reported 48,905 new Covid-19 cases along with 39 deaths today. The state also witnessed 41,699 recoveries in the last 24 hours. The test positivity rate dipped to 22.51 per cent from 26.70 per cent on Tuesday. Of the new cases, Bengaluru Urban reported 22,427 infections
Meanwhile, Karnataka celebrated the nation’s 73 Republic day in a restrained fashion at the Manekshaw Parade Ground due to the Covid-19 situation in the state. Governor Thaawar Chand Gehlot unfurled the national flag and addressed the state. The general public was not allowed to attend the event.
The state on Wednesday took part in the Republic Day parade in New Delhi, with its tableau showcasing the diversity of handicrafts in the state. Themed ‘Karnataka, the cradle of traditional handicrafts,’ the tableau was one of the 12 states that participated in this year’s parade and the only one from southern India.


The Congress on Wednesday appointed former Rajya Sabha member B K Hariprasad as the party’s leader in the Karnataka Legislative Council.

It also appointed Prakash Rathod as the chief whip and K Govindraj as the Congress Deputy Leader of Legislative Council in the state.An official statement said Congress president Sonia Gandhi appointed Hariprasad as the Leader of Legislative Council, along with making other appointments. (PTI)
An ICMR study has demonstrated that individuals infected with Omicron have significant immune response which could neutralise not only the Omicron, but also other variants of concern, including the most prevalent Delta variant. It suggests that the immune response induced by the Omicron could effectively neutralise the Delta variant, making the re-infection with Delta variant less likely, thereby displacing the Delta as dominant strain, the study said emphasising upon the need for Omicron-specific vaccine strategy. For more updates, follow Covid-19 Live Updates.
A candlelight vigil in support of the ITI workers’ struggle was held in Bangalore. Today is the 57th day of the protest of  Indian Telephone Industries Ltd (ITI) workers against their management. Rihanna, a member of the Karnataka Sexual Minorities Forum, pledged to fight for the rights of the workers including their reinstatement.
The workers and those present pledged to uphold the Constitution and exercise their fundamental rights, including that of equality, right to life, and right to collectivise.

The BJP MP has written a letter to Bommai in this regard. (PTI)
The Airport and Air Cargo Commissionerate at the Kempegowda International Airport here on Tuesday said it has arrested a 59-year-old Bengaluru resident on charges of smuggling a heroin consignment worth Rs 5.3 crore.
The officials refrained from sharing the name of the accused as the probe was still in progress. They said that the commissionerate intercepted a courier shipment on Sunday based on inputs from the Customs Intelligence Unit (CIU). A total of 754 gram of heroin was seized during the raid. The importer of the said consignment was arrested with the help of officers from Bengaluru City Customs (Preventive). Read More
JD(S) leader H D Kumaraswamy on Wednesday indicated his party would have a crucial role to play in Karnataka after the 2023 Assembly polls as he claimed that no one can do anything without the party.

The former Chief Minister said defections have become a common phenomenon in all parties ahead of elections these days as ideology has no buyers. (PTI)
Five eminent personalities from Karnataka were chosen for Padma Shri as the Union government on Tuesday announced Padma awards ahead of Republic Day.
Dalit activist and poet Siddalingaiah has been honoured with Padma Shri posthumously under the literature category. HR Keshavamurthy, Subbanna Ayyappan, Abdul Khader Nadakattin, and Amai Mahalinga Naik are the other Padma Shri awardees from the state. A brief introduction of the winners. Read More
Karnataka Chief minister Basavaraj Bommai today virtually launched the ‘Grama One’ programme, a service that aims to provide various services in one platform in rural areas.

ಸರ್ಕಾರದ ನೂರಕ್ಕೂ ಹೆಚ್ಚು ಸೇವೆಗಳನ್ನು ಗ್ರಾಮೀಣ ಭಾಗದ ನಾಗರಿಕರಿಗೆ ಗ್ರಾಮ ಪಂಚಾಯತಿಯಲ್ಲಿ ಒಂದೇ ಸೂರಿನಡಿ ಒದಗಿಸುವ ಮಹತ್ವದ ಸೇವಾ ವೇದಿಕೆ ‘ಗ್ರಾಮ ಒನ್ ‘ ನಾಗರಿಕ ಸೇವಾ ಕೇಂದ್ರಗಳನ್ನು ವರ್ಚ್ಯುಯಲ್ ಮೂಲಕ ಉದ್ಘಾಟಿಸಲಾಯಿತು.#GramaOne pic.twitter.com/hJadxm40ay
The Karnataka government has set up a committee to decide on the dress code as six girls continue to protest demanding hijab inside the classroom at the Women’s Pre-University College, Udupi. The committee will study rulings of the apex court in several states and come out with guidelines. Until then, the government has decided to maintain the status quo related to dress code.
Karnataka celebrated the nation’s 73 Republic day in a restrained fashion at the Manekshaw Parade Ground due to the Covid-19 situation in the state. Governor Thaawarchand Gehlot unfurled the national flag and addressed the state. The general public was not allowed to attend the event. See pics by our photographer Jithendra M. 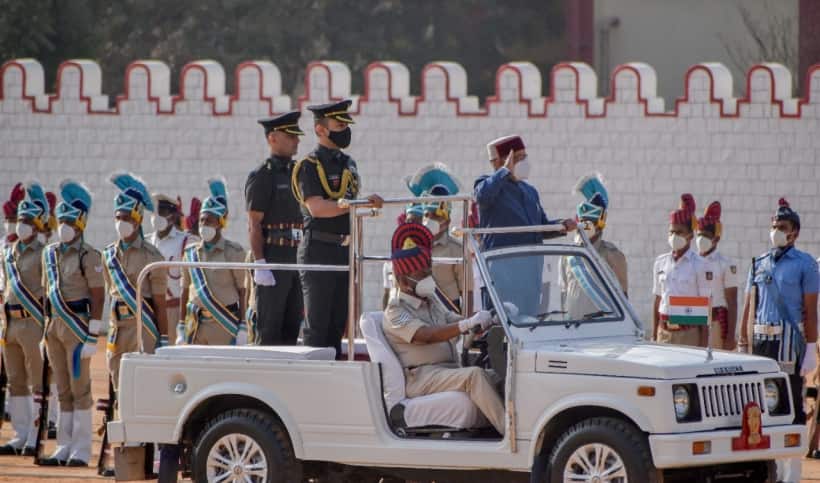 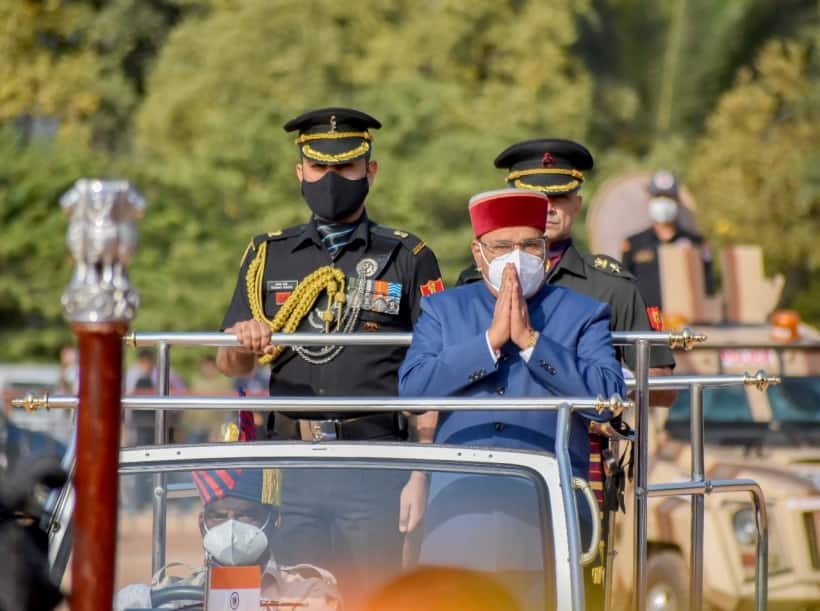 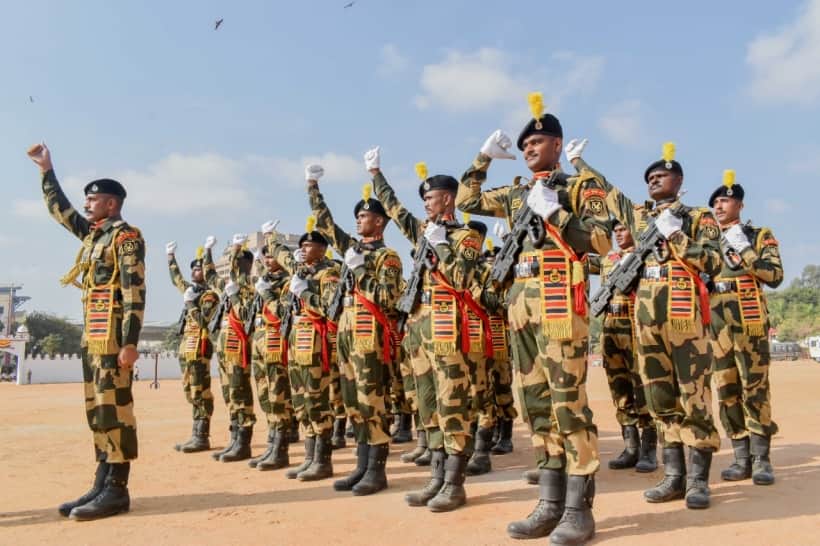 Cautioning about the third wave of COVID-19, Karnataka Governor Thaawar Chand Gehlot on Wednesday, called on the citizens to handle the situation with “total seriousness” and said there should be no room for negligence.
Delivering his address after unfurling the national flag on the occasion of the 73rd Republic Day here, he complimented the state government for succeeding in reducing the effect of COVID-19 efficiently. “We are now facing the 3rd wave of COVID-19. We should handle this situation with total seriousness and negligence has no room now. We must continue to observe the SMS mantra of – Social Distancing, Masking and Sanitization for the sake of everybody’s health,” the Governor said. PTI
Ecological Experts have pointed out that the Karnataka forest department should concentrate more on plantations in dry regions than in notified forest areas in the Western Ghats. Dry regions like Vijayapura, Raichur, Gadag, and Koppal have less than 5 per cent green cover and plantations there would contribute more to carbon sequestration (the process of capturing and storing atmospheric carbon dioxide to mitigate global warming), said experts.
Former principal chief conservator of forest BK Singh said: “Annually the forest department has been taking up plantations of 50,000 hectares in the state of Karnataka. There is a greater focus on planting in Western Ghats areas than in dry areas. The growth in Western Ghats areas is on average 30 cubic metres per hectare per year, while that in dry areas is three cubic metres per hectare per year. But the problem is that the Western Ghats areas are fully saturated and newly planted trees do not record good growth. I would advise that the focus is shifted to dry areas that will generate more overall biomass in the state, which will have more carbon sequestration potential.” (Read more)
From skillfully made pots, carefully sculpted sandalwood miniatures to hand-woven sarees, Karnataka’s rich tradition of handicraft was on grand display at the Republic Day parade in New Delhi on Wednesday. Here are the key points on the display:
🟥 A massive Asiatic elephant sculpted out of Mysuru rosewood with ivory inlay carvings, eye-catching Bidriware, bronze statues and lacquerware toys from Channapatna were the highlight of the tableau
🟥The tableau also featured Kamaladevi Chhatopadhyay, the acclaimed freedom fighter from Karnataka, who is also hailed as the ‘mother of traditional handicrafts in India’. She is seen offering ‘baagina’ that includes a sandal box, peacock shaped lamp pots, banana fibre bags from Sandur among others.
🟥 Terracota, sandalwood carving and the art of ivory carving is unique to Karnataka and the state government was making special efforts to ensure that the 55,000 artisans in the state get access to markets in this digital age, officials said.
🟥 The tableau showcased 16 traditional handicraft products that have received the Geographical Indicator tag.
🟥 The coastal traditions of the state also found a place on the tableau in the form of Yakshagana models and bronze face masks used in ‘bhootha aradhane’ (devil worship).
🟥 The tableau has been designed by a team of 100 artists led by art director Shashidhar Adapa. A minute-long special song eulogising the state’s folk arts and craft has been composed by music director Praveen Rao. (PTI)
Karnataka’s tableau for the 73rd Republic Day celebrations was themed ‘Karnataka, the cradle of traditional handicrafts.’
The tableau of #Karnataka at #RepublicDay parade depicting the theme ‘Karnataka: The cradle of traditional Handicrafts’. @MinOfCultureGoI @CMofKarnataka @PIBBengaluru #RepublicDayIndia #RepublicDay2022 pic.twitter.com/zxftoVjDAg

India marks 73rd #RepublicDay with a sense of gratitude to our freedom fighters and resolve to uphold our constitution.

May our 🇮🇳 fly high scaling new heights in every sphere. pic.twitter.com/b61oEwQGso

Karnataka Home Minister Araga Jnanendra sought a detailed enquiry report from officials of the Bengaluru Parappana Agrahara Central Prison following allegations of illegal activities and special treatment for VIPs there.
In a video, which has gone viral, a history-sheeter currently out on bail is seen discussing with another prisoner about how they can access special facilities at the prison if certain jail officials are bribed. A source at the prison said he has no idea how or why this video emerged at the moment as the exact date or time when it was shot has not been ascertained. (Read more)
Former chief minister B S Yediyurappa on Wednesday hoisted the national flag at Bengaluru.
Former #Karnataka Chief Minister BS Yediyurappa hoists the national flag on the occasion of Republic Day in #Bengaluru


Five persons from Karnataka have been selected for the prestigious Padma awards. The men are being recognised for their contributions in diverse fields, including arts, agriculture and poetry.
→ Padma Shri for Subbanna Ayyappan, Director-General, Indian Council of Agricultural Research, for his contributions in the field of science and engineering
→ Padma Shri for Gamaka exponent H R Keshavamurthy for his contributions to art
→ Padma Shri for Abdul Khader Nadakattin for his grassroots innovation in agriculture
→ Padma Shri for  Amai Mahalinga Naik for his contributions to agriculture
→ Posthumous award for Dalit poet Siddhalingaiah for his contributions to the fields of literature and education
An all-party meeting would be convened in Karnataka to discuss inter-state water disputes in the first week of February, Chief Minister Basavaraj Bommai has said.
Speaking to media persons after a video conference on inter-state water disputes with his ministerial colleagues, legal experts and senior counsels who represent the state in the water disputes before the courts, Bommai said Saturday that the meeting discussed disputes related to the Krishna, Cauvery river basins and the Mahadayi project which are before the courts. Another video conference would be conducted to discuss all these issues by the end of January.