Karnataka KCET Result 2022 Updates: The Karnataka Examinations Authority (KEA) today released the result for the Common Entrance Test (KCET) 2022. Karnataka’s Minister of Higher Education CN Ashwath Narayan announced the results via press conference at 10 am. Candidates who appeared for the entrance exam can check their results at kea.kar.nic.in, karresults.nic.in.
This year, the exam was conducted on  June 16, 17 and 18 and the provisional answer key was released on June 22. A total of 2,16,559 candidates had applied out of which 2,10,829 candidates appeared for the test. A total of 1,71,656 students are eligible for engineering, 1,74,568 students for B Pharma and 1,39,968 for BSC (Agriculture).
KCET is an entrance exam conducted by the state of Karnataka for admission to various colleges in the state for several engineering, architecture and technology courses such as BVSc and AH, B.Sc. (Hons) Agriculture, B.Sc. (Hons) Agriculture, Business Management, B.Sc. (Hons) Sericulture, B. Pharma, B.Sc (Hons) Forestry, B.Tech (Bio-Technology), Bachelor of Yoga.
Several students have complained on the missing ranks on their CET score cards. Giving clarity on the same, the KEA official said, “Rankings will not be shown if the students’ registration number is entered (11 digits) . The user has to enter the student’s PU number (6 digits) only then the rankings will be shown. This is the case for both state and CBSE students. If both do not work, we will send a fresh link to the candidate in the evening where he/she had to re-upload the class 12 marks. The rankings will then be released in the next few days.”
Parents gather at Karnataka Education Authority expressing anger against the authorities for technical glitches hitting the KEA portal. Parents and students complain that CET ranks and PUC/CBSE results are not reflecting in the report card. 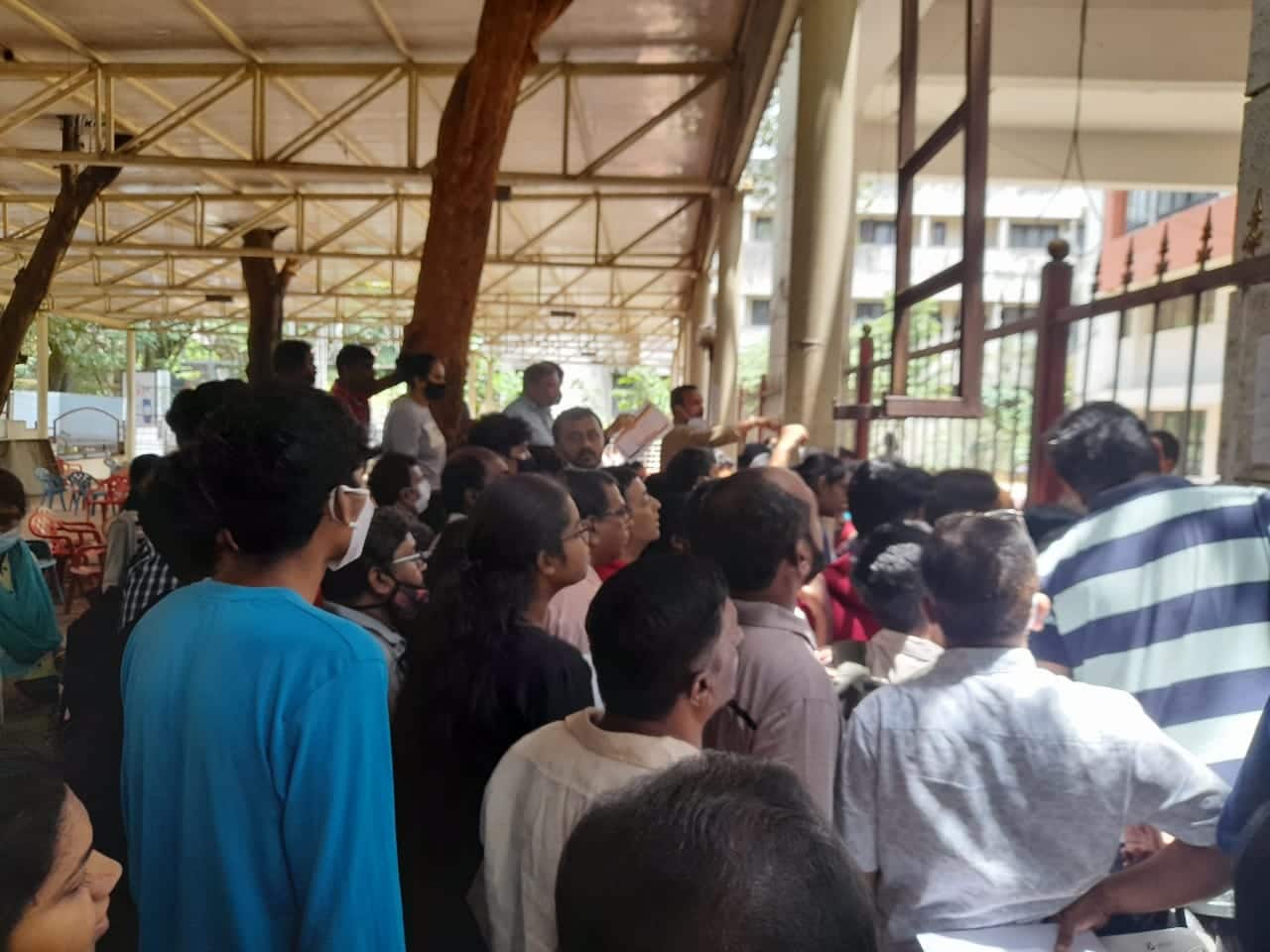 In the Karnataka Common Entrance Test (KCET) 2022 results declared today, Bengaluru’s Apporv Tandon topped the engineering category exam. A Google job aspirant, Apoorv Tandon was quite confident of seeing himself among the top 10 rank holders, but emerging as the first rank holder of KCET under the engineering category came as a surprise for him. Apart from this, Apoorv also secured third position in the Pharmacy exam. Read more
A total of 1,08,698 seats have been allotted for engineering out which 60,000 are government college seats, 28,000 are Comedk quota seats, 31,634 are management quota seats and 57,000 are supernumerary quota seats.
In the KCET Agriculture exam, Bengaluru’s Arjun Ravisankar topped the exam. He was closely followed by Sumeet S Patil and Sudeep YM at second and third ranks respectively. A total of 1,39,968 candidates have been declared eligible for BSC (Agriculture)
In the KCET 2022 result declared today, Shishir RK of Bengaluru secured rank 1 followed by Hrishikesh N Gangule at rank 2 and Apporv Tondon at rank 3. Apoorv has also topped the engineering category exam.
The document verification process of KCET qualified candidates will begin on August 5. Students need these documents for counselling
Final print out of the CET-2022 Online Application Form
‘CET 2022’ Admission Ticket
SSLC / 10th Standard Marks Card
2nd PUC / 12th Standard Marks Card
Seven Years Study Certificate counter signed by the concerned BEO / DDPI
As the KCET result is declared, qualified candidates will now be called in for counselling rounds. Details for these counselling rounds will soon be notified to candidates on the portal or through the individual’s registered contact details. Candidates who pass the KCET 2022 exam and counselling rounds will qualify for getting admission in the state’s participating institutions for several engineering, architecture and technology courses

KEA declared the KCET results today at 10 am. Candidates can now check scores at kar.nic.in, karresults.nic.in
Ramya S, Executive Director of Karnataka Examination Authoritya (KEA) informed that a total of 7 grace marks have been given to candidates due to printing error, wherein 5 marks are given for mathematics and one each for physics and chemistry.
In the KCET 2022 result declared today, Bengaluru’s Apoorv Tandon has topped the engineering category exam with 98.61%. The second rank is shared by Siddhartha Singh from Bengaluru who scored 98.33%, followed by Atmakuri Venkata Madh who scored 98.11%.
The Karnataka Examinations Authority (KEA) has announced the results for KCET 2022. A total of 2,16,559 candidates had applied out of which 2,10,829 candidates appeared for the test. A total of 1,71,656 students are eligible for engineering, 1,74,568 students for B Pharma and 1,39,968 for BSC (Agriculture).
Step 1: Visit the official KCET websites — kea.kar.nic.in, karresults.nic.in
Step 2: Click on the KCET 2022 result link available on the home page.
Step 3: Key in all the required credentials to login.
Step 4: Your score card will be visible on the screen.
Step 5: Download and save for future reference.
Last year, a total of 2,01,834 candidates had registered for KCET-2021, which was held on August 28 and 29, 2021. Of the total, 1,62,439 (80.48 per cent) candidates had appeared for biology, and 1,89,522 (93.90 per cent) for mathematics. The attendance for physics and chemistry tests, as noted by KEA, was 1,93,588 (95.91 per cent) and 1,93,522 (95.88 per cent), respectively.
Students need these documents for counselling
The KCET 2022 result declaration press conference will begin soon. Over 2 lakh candidates are waiting for their KCET results today. Once announced, the result will be available at official website from 11 am onwards.
To check their KCET final scores today, candidates will have to visit the official website, then click on the link for KCET 2022 result. After keying in all the required credentials, candidates will be able to check their score.
The Karnataka Examinations Authority (KEA) will hold a press conference to release the KCET 2022 results today at 9:45 am. The result link will be activated at 11 am. Here are the websites to download scorecard:
kar.nic.in,
karresults.nic.in
Candidates who pass the KCET 2022 exam and counselling rounds will qualify for getting admission in the state’s participating institutions for several engineering, architecture and technology courses such as BVSc and AH, B.Sc. (Hons) Agriculture, B.Sc. (Hons) Agriculture, Business Management, B.Sc. (Hons) Sericulture, B. Pharma, B.Sc (Hons) Forestry, B.Tech (Bio-Technology), Bachelor of Yoga.
A total of 2,10,829 students appeared in the Karnataka CET this year. The result of all these students will be declared today at 11 am. Once announced, the result link will be activated at the official websites –  kea.kar.nic.in, karresults.nic.in.
KCET 2022 Results will be announced at 9:45 am on July 30
KCET 2022 result Updates: Last year, a total of 2,01,834 candidates registered for KCET of which 193447 appeared. As many as 70,888 boys and 85022 girls had appeared for Bachelor of Naturopathy and Yogic Sciences (BNYS) exam while 90,601 boys and 92630 girls had appeared for the engineering entrance exam.