Mumbai News Highlights (July 28): The state Cabinet on Wednesday approved a detailed project report (DPR), seeking Rs 39,602 crore for the Maharashtra State Electricity Distribution Company (MAHADISCOM), to improve the power distribution system in a bid to make the company financially stable.
Meanwhile, Rajya Sabha MP and Shiv Sena spokesperson Sanjay Raut did not appear before Enforcement Directorate (ED) in Mumbai on Wednesday. He is in New Delhi attending the Parliament session.
In other news, in the first seven months of 2022, Maharashtra has surpassed the number of cholera cases it had witnessed last year. Also, during this period, the state witnessed the highest cholera-related fatalities in the last 10 years. In pre-pandemic 2019, the state had witnessed 223 cholera cases. A year after reporting no cholera cases in 2020, the number of cases climbed to 176 in 2021. This counts as an average of 15 cases per month.
At least 12 activists were detained near the controversial spot earmarked for a Mumbai Metro car shed in the Aarey Colony area here on Thursday afternoon, police said.
They were moving “suspiciously” in the area, said an official.
The activists were taken to Aarey police station and allowed to leave after a warning, he said.
Environmental groups are opposed to the construction of a Metro car shed in the leafy Aarey Colony which borders on the Sanjay Gandhi National Park in north Mumbai.(PTI)
Four persons have been arrested from Rajasthan for allegedly robbing an employee of a jewellery shop on a south Mumbai street last week, police said on Thursday.
The case was cracked within 48 hours of the registration of the First Information Report, he said.
Four men waylaid an employee of a jeweller in Mumbai’s Pydhonie area on Saturday evening and ran away after snatching a bag containing 890 grams of jewellery from him, the official said.(PTI)
Shiv Sena president Uddhav Thackeray on Thursday said the Supreme Court’s ruling on the petitions filed by his and Eknath Shinde’s factions will determine democracy’s future in India.
Thackeray was speaking to Sena workers at his residence `Matoshree’ here after inducting environmental activist Sushma Andhare and Prashant Surve in the party.
Surve is the former husband of rebel Sena MP Bhawana Gawli.
“Shiv Sena is fighting a legal and constitutional battle. The Supreme Court’s verdict will decide not only the party’s future but also the future of democracy in the country,” Thackeray said.(PTI)
Chief Minister Eknath Shinde met senior Shiv Sena leader and former Chief Minister Manohar Joshi at his office.On this occasion Manohar Joshi  congratulated him for becoming Chief Minister. Joshi said that once again a common Shiv Sainik became the Chief Minister of the state and the joy was clearly visible on his face. He also gave valuable guidance to Chief Minister Shinde from his experience. Express Photo
A woman witness in the Patra Chawl land redevelopment irregularities case being probed by the Enforcement Directorate (ED) has claimed that she received a note, which threatened that she would be raped and killed, police said on Thursday.
The witness has submitted a written complaint at the Vakola police station on July 20.
She claimed that she received the threat note inserted in a newspaper delivered at her home on July 15, which mentioned that she would be raped and murdered “if she opened her mouth before the ED”, he said.(PTI)
The Narcotics Control Bureau (NCB) has seized 190 kg of high-quality ganja, estimated to be worth Rs 4 crore, and arrested four alleged drug traffickers after carrying out an operation in adjoining Thane district, an official said on Thursday.
Acting on specific information, a team of the NCB Mumbai zonal unit laid a trap at Padgha in Bhiwandi town on the intervening night of Tuesday and Wednesday and stopped two vehicles laden with goods, he said.
NCB personnel questioned the drivers about the goods inside their vehicles, but they did not give satisfactory replies, the official said.(PTI)
Chief Minister Eknath Shinde today paid a goodwill visit to senior Shiv Sena leader Leeladhar Dake at his residence in Chembur. Also took his blessings after assuming the post of Chief Minister.
At this time, the Chief Minister inquired earnestly about Dake’s health. He also wished them a long and healthy life.
Shiv Sena MLA Mangesh Kudalkar, MLA Sanjay Shirsat and former MLA Ashok Patil were also present on this occasion. 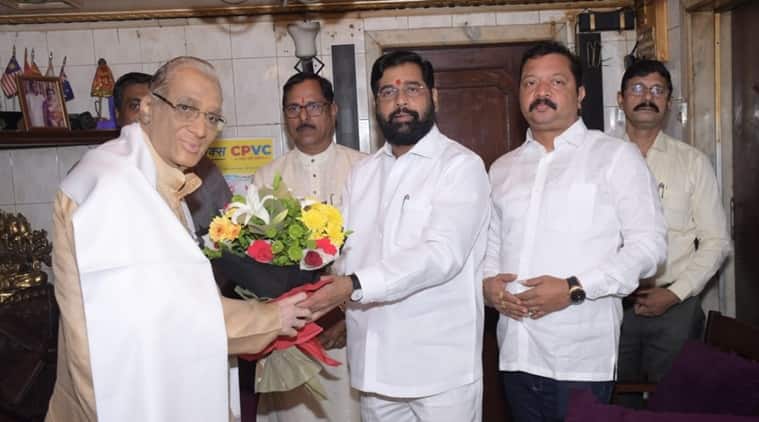 Express Photo
Samples of 10 suspected patients with monkeypox from the state sent to NIV. The samples of 8 of them have come negative and the report of two samples are pending.
A Letter of Offer and Acceptance (LoA) for procurement of 24 MH 60R multi-role helicopters was concluded with the US Government in Feb 2020. The first three MH 60Rs delivered in US in 2021 are being utilised for training to IN crew. The next three MH 60R helicopters are being delivered at Kochi, two helicopters of which were received by the Indian Navy at Cochin International Airport on 28 Jul 22 and the third helicopter is scheduled to be delivered in Aug 22.
The delivery of all 24 MH 60R helicopters will be completed by 2025. The induction of state of the art mission capable platforms will significantly boost the integral ASW capability of the Indian Navy. Express Photo
Indian Navy has created maritime history today by taking delivery of the prestigious Indigenous Aircraft Carrier (AC) ‘Vikrant from her builder Cochin Shipyard Limited (CSL), Kochi. Designed by Indian Navy’s inhouse Directorate of Naval Design (DND) and built by CSL, a Public Sector Shipyard under Ministry of Shipping (MoS), the carrier is christened after her illustrious predecessor, India’s first Aircraft Carrier which played a vital role in the 1971 war. Coinciding with the celebrations to commemorate 75th anniversary of India’s independence ‘Azadi Ka Amrit Mahotsav’, the reincarnation of Vikrant is a true testimony to the country’s zeal and fervour in pursuing capability build up towards enhanced maritime security. 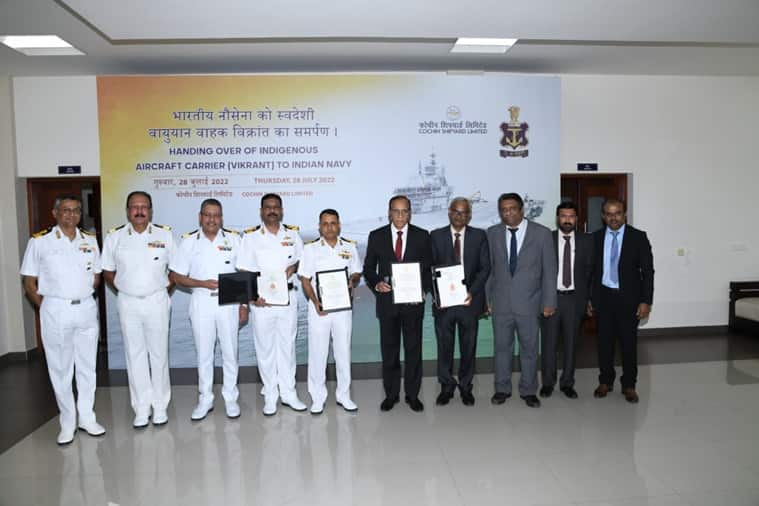 Express Photo
The Maharashtra government on Thursday transferred Bhandara Superintendent of Police Vasant Jadhav and Sangli Deputy Superintendent of Police Krishnat Pingle.
The order announcing their transfers also mentioned that information of new postings for the two officials will be issued independently.
Incidentally, during Jadhav’s tenure in Bhandara, Shiv Sena MLA Narendra Bhondekar was booked by Jawahar Nagar police under Indian Penal Code and Maharashtra Police Act provisions for unlawful assembly and alleged beating up of teachers and staff of a private school in January last year.(PTI)
A Bombay High Court bench led by Chief Justice Dipankar Datta on Thursday recused from hearing a petition challenging the appointment of Subodh Jaiswal as the Central Bureau of Investigation director, following a letter of complaint against CJ Datta.
Former Maharashtra Assistant Commissioner of Police Rajendra Trivedi had filed the PIL challenging Jaiswal’s appointment.
CJ Datta said it had come to his notice that on March 22 this year, Trivedi wrote a letter to Chief Justice of India N V Ramana, “complaining” against him.
Jaiswal, who had earlier held the post of Maharashtra’s Director General of Police (DGP), was appointed as the CBI director in May last year.(PTI)
The Nationalist Congress Party in Maharashtra on Thursday slammed the Union government for failing to generate the promised two crore jobs per year.
The Centre’s Department of Personnel and Training (DoPT) has informed the Lok Sabha that 22 crore applications were received for government jobs since 2014 but only 7.22 lakh applications were considered, the NCP’s chief spokesperson Mahesh Tapase said.
This means only 0.32 per cent of the applicants got jobs and over 99 per cent were rejected, he said in a statement.
“Prime Minister Narendra Modi came to power promising huge job opportunities to the youth. But the reality is far from perception. Unemployment is at its highest today owing to failed policies. But the Modi government is besieged only with politics of hatred and divide and, hence, has no time for developmental issues of inclusion and growth,” he claimed.(PTI)
The IIT Bombay Administration hiked fees for PhD and MTech courses by more than 45% without any consultation with the student representatives. Some students are protesting against this unjust fee hike and members of Mumbai Youth Congress have shown support to them. The Ministry of Environment, Forest and Climate Change had notified the Plastic Waste Management Amendment Rules, 2021, on 12 August, 2021. (File)
The Mumbai Police, which has booked actor Ranveer Singh on charges of obscenity for allegedly posting photographs from his nude photoshoot for Paper magazine on his Instagram account, has begun “technical investigation” into the matter.
Meanwhile, apart from expressing anger and hurt at the rebel camp, Shiv Sena chief Uddhav Thackeray’s addresses to the party cadre over the past month have made one thing clear: winning the upcoming elections is Sena’s number one priority.
In other news, the rebel Shiv Sena group led by Maharashtra Chief Minister Eknath Shinde and the BJP will contest the Aurangabad Municipal Corporation (AMC) elections in alliance, a rebel faction functionary said. The AMC polls are due and the dates are yet to be announced.