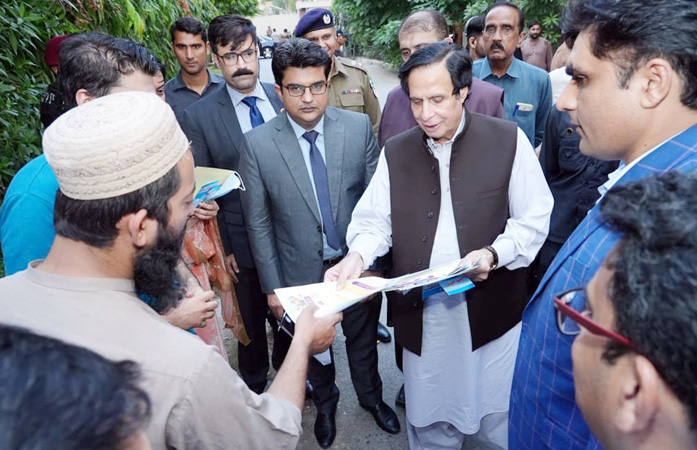 Punjab Chief Minister Chaudhry Pervaiz Elahi on Thursday lifted the ban on recruitment. The Punjab CM also announced 30,000 jobs in the province.
The recruitments would be made in different departments, and the projects in grades BPS-1 to BPS-5 while hiring related to above BPS-5 will be sent to a sub-committee for consideration.
Meanwhile, Chief Minister Punjab Chaudhry Pervaiz Elahi suddenly reached Shah Jamal on his return from the CMO and reviewed anti-dengue campaign in Shah Jamal. He also checked the activities of the anti-dengue surveillance team. CM distributed pamphlets among the people to create awareness about the steps being taken by the government for the eradication of dengue. CM also reviewed the houses from where the dengue larva was found and was also shown dengue larva being found from one house.
Pervaiz Elahi talked about the performance of the anti-dengue teams with the inhabitants of the area. CM talked with a resident of a house Farhan from where the dengue larva was found and apprised the people about the need to adopt preventive measures to save themselves from dengue. CM while talking with the staff members of the anti-dengue team directed that in whichever house larva is found, survey should be done in the surrounding houses as well.
The CM directed the surveillance teams to regularly visit the hotspot houses and other areas. He asserted that the parks and the green areas should be specially checked and spray should be done regularly adding that wherever there is stagnant water, its drainage should be ensured expeditiously. CM ordered to carry on the anti-dengue campaign in a further effective manner. Commissioner Lahore Division, Deputy Commissioner Lahore and officials of Health Department were also present on the occasion.
Meanwhile, the ambassador of Hungary Mr Bela Fazekas called on Chief Minister Punjab Chaudhry Parvez Elahi and former federal minister Moonis Elahi at the Chief Minister’s Office and discussed matters of mutual interest.
It was agreed to promote bilateral cooperation in the fields of agriculture, wastewater treatment and water management. The CM said that the provision of scholarships to Pakistani students by Hungary is a welcome step. The Punjab government has created new facilities for investment and all kinds of facilities are given to foreign investors; he added and concluded that we should benefit from each other’s expertise.
Mr Bela Fazekas said that Hungary is ready to support the Punjab government in the fields of agriculture, wastewater treatment and water management. When you were the chief minister in 2006, I met you at that time too, and I remember the happy memories of meeting you. It is a good coincidence that now that you have become the chief minister again, I am meeting you once again; the ambassador said and concluded that he is an admirer of the public welfare-oriented work done by the CM.
Chief Secretary Abdullah Sumbal, former Principal Secretary to Chief Minister GM Sikandar and others were also present.
Saeed Ahmad Saeedi MPA, former MNA Chaudhry Ashfaq and CEO Chen One Kashif Ashfaq also met Chief Minister Punjab Chaudhry Parvez Elahi at his office and discussed development projects and the general situation. Chief Minister Parvez Elahi said that a comprehensive action plan has been made for the timely completion of development projects. The performance of secretaries has been linked to the timely completion of development projects and an effective monitoring system has also been developed to complete the projects within the stipulated period, he noted. He added that the progress on development projects will be monitored by the Chief Minister’s Office.
Meanwhile, Chairman Muttahida Ulema Board Punjab Sahibzada Hamid Raza met Chief Minister Punjab Chaudhry Parvez Elahi at his office.
The CM expressed his best wishes to Hamid Raza and directed that the Muttahida Ulema Board be run efficiently. The efforts of the Ulema are praiseworthy to strengthen the country and their role in keeping the nation united is important, he noted. ‘The work of religion is a duty on all of us and we will fully support the promotion of religious traditions.’ It has been made mandatory for the students of the whole of Punjab to get Nazra education of the Holy Quran, he added. The Ulema Board and Seerat Academy would be made operational and necessary guidance on religious matters could be taken through Seerat Academy, he concluded. Sahibzada Hussain Raza and Sahibzada Hassan Raza were also present.