Divya writes about gender, philanthropy, startup and workplace trends, and business from the lens of its impact on people. She is keen to find interesting stories and new ways of telling them. A journalism graduate from Mumbai who was previously with The Economic Times, Divya is also an editor and proof-reader. Outside of work, she likes to travel, read books, drink hot chocolate, and endlessly watch, read and talk about cinema. 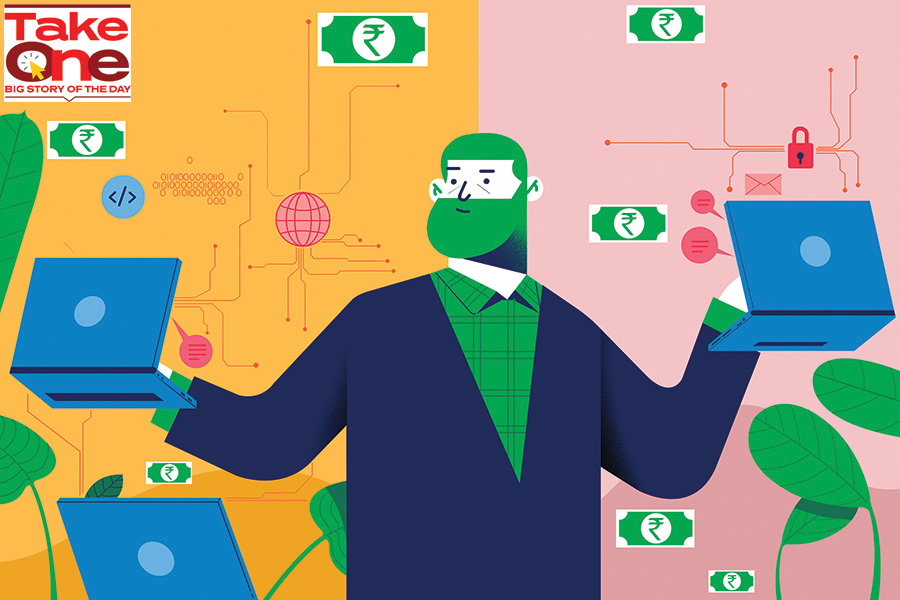 The primary concerns companies have against moonlighting is data and confidentiality breaches, and loss of productivity Illustration: Sameer Pawar

Berty Thomas owes his career successes to moonlighting. He was working as a business analyst at financial services company Barclays in May 2021, when India opened up Covid-19 vaccinations for all adults. People were struggling to get vaccination slots in the government’s CoWin platform. Thomas decided to use his love for programming to write a script over CoWin’s public Application Programming Interface (API) to help identify available slots for specific age groups. He decided to run the script on the server that would issue alerts as soon as slots were available at a nearest vaccination centre. His platform, under45.in, added people to relevant Telegram groups in their areas.

Thomas agrees that “it was round-the-clock work”, where his day started before sunrise, and went on until almost midnight. He would juggle work commitments and scheduled meetings, and take stock of alerts, messages and server-side issues on the under45.in platform. As of July 1, 2021, under45.in was being used in 675-odd districts across the country and had 41 lakh subscribers, and helped many people book slots and access Covid-19 vaccinations.

What was required on his part, Thomas says, was complete transparency with his company, which did not have a problem with his programming as it did not clash with his duties or priorities at work. His colleagues also encouraged his work and covered for him at times when required.

“Moonlighting is the only way you can upskill yourself, learn new things and ensure you are not redundant in your career,” says Thomas, 37, whose platform was soon acquired by HealthifyMe. At this point, he quit his job at Barclays. He is now an associate director of new initiatives at the digital health and wellness startup, and is working on other hobby projects. “As long as you are not working in a competing industry, maintaining confidentiality and disclosure, there should be no problem with moonlighting. It’s the only way, especially in the IT industry, to grow,” he says.

Of late, a rash of IT companies has issued strong statements and taken action against moonlighting. Today, Wipro Chairman Rishad Premiji, speaking at the AIMA (All India Management Association) National Management Convention, said that the company had fired 300 employees over the past few months, who were found working directly with Wipro’s competitors. Premji had earlier tweeted that moonlighting is “cheating—plain and simple”, and he reiterated that today by calling it a violation of integrity “in its deepest form”, as per media reports. On September 15, IBM India MD Sandip Patel called moonlighting unethical, and on September 13, media reports stated that Infosys had sent an email to its employees, complete with lines like ‘no two-timing’ and ‘no double lives’, warning them of strict disciplinary action, including termination, if they are found to be moonlighting.

On the other hand, CP Gurnani, managing director and CEO of Tech Mahindra, says we live in a world where a certain amount of discipline and time management exists. “So, as long as an employee is achieving the set productivity and efficiency targets, and is not doing anything against the ethics of the company, moonlighting should not be a problem.” He adds that “If you’re a millennial and if you can do two jobs, you’re a superhero.”

Moonlighting is by no means a new concept, with employees often taking up a secondary job after work hours, either to earn more money or follow their passions, hone their skills, grow their network and find more exciting career opportunities. This concept is not defined under any statute in Indian employment laws. Moonlighting is also not necessarily dual employment, which is a formal employer-employee relationship, complete with legal obligations like minimum wage, provident fund, gratuity etc. It could also be following one’s passions, side hustles or freelancing. This can be with or without the knowledge of the primary employer.

According to HR experts, the incidence of moonlighting has increased in the wake of the Covid-19 pandemic in 2020, with people wanting to earn more money in the face of job losses, inflation, or having more time as a result of working from home.

In the IT industry, employees are also cashing in on the demand for skilled talent. “One of biggest concerns flagged by analysts tracking the Indian IT companies is staff churn and the ongoing talent war, as everyone fights to attract the same set of software engineers—foreign companies with large software centres in India, well-funded Indian startups, and even a new generation of tech startups from Silicon Valley to Sydney, which are setting up and expanding development centres in Bengaluru, Hyderabad, Pune and Chennai,” Forbes India reported in April.

Saran Balasundaram, founder of tech recruitment firm Han Digital, says moonlighting in the IT industry has “almost quadrupled” in the wake of the Covid-19 pandemic. He says that there are five-odd million people working in India’s IT/BPO sector, out of which 60 percent, or about three million people, work with IT services. Out of these, around 2.6 million people—close to 88 percent—continue working from home. “Say around 15 percent of these 2.6 million people have realised that their roles are redundant or they do not have much work to do, and at the same time, they also keep hearing about other exciting job opportunities from their social network,” Balasundaram explains. “Add the emergence of gig platforms to the mix, and you’ll find that the incidence of moonlighting has almost quadrupled in the industry.”

The primary concerns companies have against moonlighting is data and confidentiality breaches, and loss of productivity. “As a company, we do not promote moonlighting. We believe in employees being 100 percent committed and sincere to our organisation,” says Vivek Gupta, president and CEO of IT company Mastech Digital. He adds that concerns are and will always remain around “productivity, sincerity, and above all, honesty” of the employees.

“Moonlighting is really an ethical issue,” says Shantanu Mirajkar, CTO of technology company Clairvoyant India. He believes that there must be full disclosure on the part of employees about any job, side hustle or freelance gigs taken up outside of the primary employment, and if needed, get into just contractual agreement rather than full-time employment (FTE). “That way the employee becomes accountable for the time spent for each engagement and charges accordingly. But they also need to be held accountable for any privacy or non-disclosure breaches at a personal level,” he says. “On the other hand, the employer keeps the right to scrutinize the time spent and productivity delivered and be more flexible in awarding more work or terminating contracts.”

Thomas is of the opinion that employees in IT services companies are realising that their companies make huge margins from every client, and that they could make a fraction of their monthly income just by working for a few hours. “This scares IT services companies, because if programmers start working for the clients directly, it will cut into their profits,” he says. According to him, overtime pay is an alien concept in India and many employees are under-paid in their full-time jobs, so moonlighting becomes a logical thing to do.

Balasundaram of Han Digital says that if companies offer competitive salaries and provide timely incentives, it will keep employees motivated, fulfill their economic needs and thereby decrease the risk of them taking up the secondary job.

IT companies can consider viewing the issue of moonlighting from a practical standpoint, says Pooja Ramchandani, partner, employment law at Shardul Amarchand Mangaldas. “Moonlighting addresses the needs of those employees who want to earn more money. So long as there is no conflict, and performance is not hampered, a strategic decision that what an employee does beyond business hours is not the concern of the employer, provided employees protect confidentiality and not work for competitors during the course of their employment,” she explains. “This may resolve the issue for both employer and employee to some extent. However, there will remain the question of increase in fatigue impacting efficiency.”

Mirajkar of Clairvoyant India believes that companies are already starting to view moonlighting differently, while Gupta of Mastech Digital says that while almost all IT companies stand against moonlighting in its current form, it could perhaps change if the gig style of working steadily grows in size and there will be a significant pool of freelancers who would engage on an hourly basis without being employed with any of them. “And in that case, the nature of their engagement will be different, including their contracts and other perquisites. If that happens, IT companies may consider having a layer of freelancers who do certain kinds of ‘gig’ jobs, while they continue to have full-time employees doing other core jobs,” Gupta says.

Ramchandani says that typically, employment arrangements are exclusive in nature, and the reason for this exclusivity is so that one devotes one’s entire time and energy in the growth of a particular business, there is protection of confidential and proprietary information, and high performance. That said, she says it would also help to go back to the drawing board with regards to the exclusivity clauses of contracts that companies draw up for full-time employees. “Since moonlighting is an evolving concept now, organisations need to look at the checks and balances to be put in place to protect themselves, and at the same time, figure out how to practically resolve the issue in a way that will work well for everyone.”

Companies like food tech platform Swiggy coming up with a policy that allows employees to moonlight in a role that does not have a conflict of interest and does not impact productivity might be a “new dawn for future employment”, says Manoranjan Dhal, professor—OB and HR at the Indian Institute of Management Kozhikode, in an opinion piece shared with Forbes India. “Companies may create an exclusive clause for the prohibition of moonlighting as per the employment contract and incorporate the conflict-of interest clause, but legal restriction without trust and engagement can’t yield results,” he says.
Check out our Festive offers upto Rs.1000/- off website prices on subscriptions + Gift card worth Rs 500/- from Eatbetterco.com. Click here to know more.
For hassle free instant subscription, just give your number and email id and our customer care agent will get in touch with you
OR
click here to Subscribe Online
AI tokens experience a surge following ChatGPT's hype, AGIX leads the way
BTC mining firm Northern Data AG earned 77.7 million euros in 2022
Amazon Web Services and Ava Labs announced a partnership
El Salvador passes bill to establish Bitcoin-backed bonds
5 Questions for Apoorv Shaligram and Uttam Sen, co-founders of e-Trnl Energy
How fashion accessories are finding a new role in the age of social media
Flexible working is gaining popularity in businesses, even among managers
Photo of the day: Tata Sierra EV at India Auto Expo 2023
What to consider before taking a job at a family-owned business
Smriti Mandhana: Willow and grace
Web3 accelerator Beacons winds up its first cohort
Metaverse opens up new opportunities for companies: CEO of Virtual Brand Group
Fight for the Future writes to the new US Congress to protect privacy
Stablecoins are the gateway to CBDC: UK MP Andrew Griffith
Jairam Sridharan, MD, Piramal Finance on the company's maiden ad campaign: Our aim is to create awareness