The Federal Reserve won’t pivot until the labor market shows signs of cracking. But once the job market appears to be rolling over, everything will change. As income growth fades, high inflation will be less likely to feed a wage-price spiral and more likely to cause consumers to retrench.
The Federal Reserve’s barrage of 75-basis-point rate hikes can only continue as long as monthly employment reports continue to show solid job gains. It’s politically acceptable for the Fed to cool an overheated job market, but jumbo rate hikes won’t fly when the job market has already lost steam.
A fourth-straight 75-basis-point rate hike looks almost certain on Nov. 2, with no more big economic reports between now and then. But odds of a fifth-straight supersize hike on Dec. 14 — now about 65%, according to CME Group’s FedWatch page — are too high.
That’s because we’re almost guaranteed to get a weak October jobs report on Nov. 4.
A look under the hood of this year’s jobs data reveals why. Through the first nine months of the year, seasonal adjustment has boosted private payrolls by 851,000. That’s a half-million extra jobs compared to the average impact of seasonal adjustment through September from 2013 to 2021. 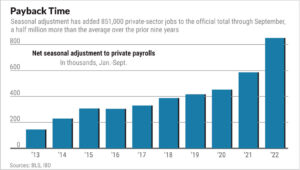 The gap is even higher over the past seven months, with this year’s seasonal adjustment providing an average boost of 539,000 jobs relative to the average seasonal adjustment from March through September over the prior nine years.
This shows two things. First, private-sector job gains have likely been overstated this year, particularly in recent months. That means hiring and income gains are likely to be revised down, showing the consumer has less savings to weather a downturn.
Most importantly for the financial-market outlook, stubbornly high employment gains are set to take a sudden turn for the worse as seasonal adjustments reverse.
Seasonal adjustments are made to economic data so that the underlying trends can be observed more clearly, rather than being obscured by ups and downs related to seasonality. For example, this year’s January employment report showed that private-sector employment fell 2.4 million from the prior month. But the Labor Department reported a gain of 492,000 private jobs after seasonal adjustment.
By definition, seasonal adjustment should balance out over the course of the year, and it usually does. There’s only been one year since 2013 in which the cumulative net seasonal adjustment was above zero (+83,000 in 2016).
That means we’re about to get major payback for the 851,000 seasonal lift to private-sector payrolls through September. And the sharpest reversal is likely to come in the October employment report.
Although this year’s seasonal adjustment is off the charts, the seasonal adjustment in 2021 is the closest match. Last year’s seasonal adjustment in October reduced private payrolls by 709,000 vs. a -533,000 adjustment in 2019 and -465,000 in 2018.
Since this year’s net seasonal adjustment through September is +265,000 vs. 2021, we should expect an even bigger negative adjustment in October’s payroll report.
The Fed’s Race To Take Down The S&P 500 And Break The World
Last year’s big seasonal adjustment came amid a big holiday season hiring binge. But this year’s holiday hiring isn’t looking quite as strong. That may mean actual hiring comes in weak after big negative seasonal adjustments in October and, to a lesser extent, November.
Outplacement firm Challenger, Gray & Christmas reported on Oct. 6 that companies announced plans in September to hire 380,000 workers. That was down from nearly 940,000 a year ago and the weakest total for September since 2011.
The big gap is at least partly because some companies like Amazon.com (AMZN), which plans to add 150,000 seasonal workers, delayed announcements until October. Still, big hiring plans have been somewhat more muted this year.
Walmart (WMT) announced plans to hire 40,000, down from 150,000 a year ago. Macy’s (M) cut hiring intentions to 41,000 from 76,000. UPS (UPS) and Target (TGT) announced plans to hire 100,000, same as a year ago. However, FedEx (FDX), which announced a big cost-cutting plan in September, including closing some sorting facilities due to lower volume, is keeping mum on hiring intentions. In 2021, the company added 100,000 seasonal employees.
For frame of reference, private-sector payrolls rose by about 1 million combined in October and November in both 2018 and 2019, unadjusted for seasonal effects. A similar total this year could translate to a flat or negative reading for payrolls this year, after seasonal adjustment.
One unknown is whether employers will be able to meet their hiring intentions on a timely basis, given labor market tightness. It’s likely to be harder this year, given that payroll employment is currently up 5.26 million from a year ago.
A soft October payrolls report would probably rule out a fifth-straight 75-basis-point rate hike. Back-to-back weak reports for both October and November might rule out a half-point hike.
However, the outlook also depends on how financial markets act between now and then. If the fledgling stock market rally continues and global bond and currency markets step back from the brink, that would tend to give the Federal Reserve more flexibility to keep hiking. The combination of market distress and a fading labor market could hold the Fed to a quarter-point hike in December, and that might be the last one.
Be sure to read IBD’s daily afternoon The Big Picture column to stay on top of how the underlying market trend develops and what it means for your trading decisions.
YOU MAY ALSO LIKE:
Even The Hellbent Fed Can’t Slow Down These 8 Stocks’ Profit
IBD Stock Of The Day: This Biotech’s Win Is Pfizer’s Loss
Join IBD Live Each Morning For Stock Tips Before The Open
Catch The Next Big Winning Stock With MarketSmith
Futures Fall As Yields Keep Rising; TWTR Dives On Latest Musk Twist
Get instant access to exclusive stock lists, expert market analysis and powerful tools with 2 months of IBD Digital for only $20!
Get market updates, educational videos, webinars, and stock analysis.
Learn how you can make more money with IBD’s investing tools, top-performing stock lists, and educational content.
Notice: Information contained herein is not and should not be construed as an offer, solicitation, or recommendation to buy or sell securities. The information has been obtained from sources we believe to be reliable; however no guarantee is made or implied with respect to its accuracy, timeliness, or completeness. Authors may own the stocks they discuss. The information and content are subject to change without notice.
*Real-time prices by Nasdaq Last Sale. Realtime quote and/or trade prices are not sourced from all markets.
Ownership data provided by Refinitiv and Estimates data provided by FactSet.
© 2000-2023 Investor’s Business Daily, LLC. All rights reserved