The chief minister of Punjab, Bhagwant Mann, married for the second time on July 7, 2022. He married Dr Gurpreet Kaur in Chandigarh in attendance of his family and friends. The ceremony was attended by the members of the Aam Aadmi Party like Raghav Chaddha and Arwind Kejriwal as well. Take a look at the married couple- Bhagwant Mann and Dr Gurpreet Kaur below. 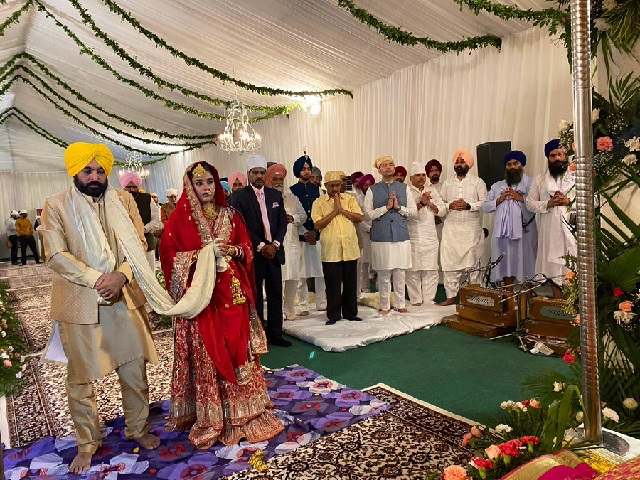 The CM of Punjab, Bhagwant Mann, divorced his first wife Inderpreet Kaur 6 years ago. Let us know more about his 2nd wife Gurpreet Kaur and the wedding ceremony on 7th July. As per the latest updates, the security measures in Chandigarh have been tightened and the fans are waiting for one glimpse of their leader.
Glimpse of #BhagwantmannMarriage pic.twitter.com/8weXQRc95c

Know all about Gurpreet Kaur, her age, family, and education in her biography below. Today is the wedding of the couple.

Punjab CM Bhagwant Mann GOT married in a close private ceremony at his house in Chandigarh with Dr Gurpreet Kaur. CM Delhi & AAP National convener Arvind Kejriwal will be in attendance. CM Mann was divorced from his earlier marriage almost 6 years back.

The wedding and the relationship have been reportedly finalised by Mann’s sister and his mother. The mother-sister duo wanted him to get married after his broken marriage in the past. The ceremony will be extremely private and the CM of Delhi, Arvind Kejriwal is said to attend.
Take a look at the wedding pictures below:
Chandigarh | Wedding rituals underway of Punjab CM Bhagwant Mann with Dr. Gurpreet Kaur pic.twitter.com/4QjnNsRXtg

Gurpreet Kaur is 32 years of age. Her family has had close connections to the Mann family for many years. She belongs to Pehowa in Kurukshetra.
Gurpreet’s father’s name is Inderjit Singh and her mother Mata Raj Kaur is a housewife.
As per reports she has studied at Maharishi Markandeshwar Medical College in Haryana’s Maulana. She was a gold medalist there.
She has also reportedly helped Bhagwant Mann in his election campaigns. Bhagwant Mann is 48 years of age now.
Congratulations to #Punjab CM Sardar @BhagwantMann and @DrGurpreetKaur_ on the occasion of their wedding.

May #Waheguru Ji shower his blessings on the couple. 🙏#BhagwantmannMarriage#DrGurpreetKaur pic.twitter.com/JcgdFnl2Ai


Bhagwant Mann’s ex-wife Inderpreet Kaur now resides in the United States of America with their two children. Both of his children attended his swearing-in ceremony.
Punjab CM @BhagwantMann is getting married to Dr Gurpreet Kaur

Legally separated from his first wife, this will be @BhagwantMann ‘s 2nd marriage

The reason for the broken marriage was cited to be a busy schedule following a political career. According to a post on Bhagwant Mann’s Facebook page, his divorce was not motivated by personal issues, and he chose Punjab over his family.
Not much is known about the would-be wife of the CM of Punjab, except that she is a doctor by profession and is based in Chandigarh.
Bhagwant Singh Mann was born on 17 October 1973. He became the 17th Chief Minister of Punjab. He leads the cabinet ministry of Punjab. He was an actor in his previous career venture.
He served two terms as a member of Parliament from the Sangrur constituency of Punjab. He resigned in 2022 from this position. In 2017, Mann was appointed as the convener of AAP Punjab.
Before the Punjab Assembly elections in March of this year, the Aam Aadmi Party declared him as its CM face for Punjab and contested the elections.
Readers should keep refreshing the page for more updates on Bhagwant Mann Gurpreet Kaur’s marriage.
Also Read|
Who is Dr Mehreen Qazi? All About IAS Tina Dabi’s Ex-Husband Athar Amir Khan’s Would-be Wife!
Optical Illusion or Ghost Ship Flying: What Do You See In The Picture & Why?
For more results, click here