Evidence has mounted that the monthly jobs reports are way off the mark and that the labor market is much weaker than it appears. That suggests a recession may be closer at hand for the U.S. economy than widely believed. The implications for the S&P 500 are mixed to negative, with lower interest rates and a weaker dollar offset by a worsening earnings outlook. Volatility is a good bet!
While the headline “Why You Can’t Trust Friday’s Jobs Report” requires a high level of conviction, we have the receipts to back it up: tax receipts.
For what it’s worth, Wall Street expects Friday’s jobs report to show the U.S. economy added 293,000 jobs in August as the unemployment rate held steady.
Yet some economists also have begun to cast doubt on the accuracy of the monthly jobs reports. UBS economist Jonathan Pingle and colleagues wrote that predicting what the jobs report will say has become “less about forecasting labor market fundamentals and more about war-gaming the survey’s potential mismeasurement.” 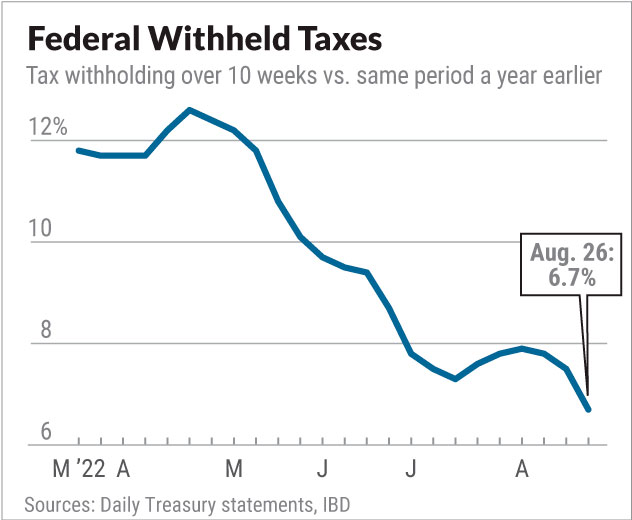 Exhibit A is the data on federal income and employment tax withholdings reported in daily Treasury statements. An IBD analysis of Treasury inflows finds that the growth rate of the taxes withheld from worker paychecks has been sliding sharply. Growth in those tax receipts over the 10 weeks through Aug. 26 faded to just 6.7% from a year ago. That’s down from about 12% through mid-May.
The big slowdown in the growth of withheld federal taxes presents a stark contrast to the aggregate weekly payrolls data in the monthly employment reports. Bureau of Labor Statistics data shows that economywide pay rose 9.7% from a year ago in July — nearly 45% faster than the recent pace of growth for tax receipts.
That aggregate pay figure in the jobs report reflects hourly wage growth and the increase in total hours worked across the economy, which factors in hiring over the past year. However, the growth rate comparison between aggregate wage income and tax withholdings isn’t exactly an apples-to-apples comparison. The taxes also cover incentive pay, and not all labor income is taxed at the same rate.
Still, if tax receipts are slowing so markedly, that’s bad news for the economy. The tax data suggests that aggregate labor income is now shrinking in real terms. With wages growing at least 5% and employer payrolls up 3.6 million, or 2.5%, in the six months through February, the tax data hint that hiring has basically ground to a halt in recent months.
In other words, the tax data is sending roughly the same message as the Labor Department’s household survey. The household survey is used to derive the unemployment rate. Over the past four months, the household survey shows the number of people working has fallen by 168,000. That’s despite the employer survey, which provides the jobs report’s headline hiring gain that shows an increase of 1.68 million jobs.
How odd is that divergence between the household and employer surveys? Pingle finds that the four-month, 1.85-million-job gap between the two surveys is by far the largest in data back to 1948.
The employer survey counts jobs, while the household survey counts workers. So the latter doesn’t include an increase in the number of people holding multiple jobs. But the difference explains a fraction of the divergence. The data only shows an increase of 150,000 multiple job holders since January.
The monthly job figures include one pretty obvious source of mismeasurement: the estimate of firm births and deaths. In the short run, the Labor Department has to guess how net business formation adds to or subtracts from overall job growth.
Getting this right is hard, particularly at an economic inflection point, since the data reflects prior trends. UBS economists note that the birth-death adjustment has added 926,000 jobs to private employment. That’s 170,000 more than the comparable four months of 2019.
July’s guess that business formation added 309,000 jobs to the seasonally unadjusted employment total stands out for being unlikely. Keep in mind that the S&P 500 had just tumbled 25% from record highs, crypto was crashing, inflation was near 9%, and the 10-year Treasury yield had just hit an 11-year high.
Pingle also highlights seasonal adjustments of payroll gains as another factor “that can keep (job) gains going for nonfundamental reasons.”
“For the last four months in a row seasonal adjustment has been more supportive in 2022 than 2021,” boosting net job additions by 514,000 over that period.
If, as seems likely, the Labor Department is overstating job gains, when will the government correct the figures? Maybe in a year. Every August, the Labor Department announces preliminary revisions to a full year of data through the prior March. But the divergence between strong payroll growth and the soft tax and household survey data only began in April or May.
Before Federal Reserve chief Jerome Powell’s Jackson Hole speech, the S&P 500’s summer rally was still alive as investors hoped for a soft landing and a shift from rate hikes to rate cuts around the middle of 2023.
But Powell undercut the resilience of both financial markets and the economy with a speech signaling that Fed policy will be tighter for longer. “Restoring price stability will take some time and requires using our tools forcefully to bring demand and supply into better balance.”
Once it becomes clear that the job market is sputtering more abruptly than expected, the 10-year Treasury yield will dive and the U.S. dollar index will reverse from 20-year highs. But that’s not likely to reflate the S&P 500 until the economy’s downward momentum abates and the earnings outlook brightens.
Be sure to read IBD’s The Big Picture column after each trading day to get the latest on the prevailing stock market trend and what it means for your trading decisions.
Please follow Jed Graham on Twitter @IBD_JGraham for coverage of economic policy and financial markets.
YOU MAY ALSO LIKE:
IBD Digital: Unlock IBD’s Premium Stock Lists, Tools And Analysis Today
Why This IBD Tool Simplifies The Search For Top Stocks
Profit From Short-Term Trades: IBD SwingTrader
Find Today’s Best Growth Stocks To Watch With IBD 50
Market Rally Gets Reprieve; What To Look For In Friday’s Jobs Report
Get instant access to exclusive stock lists, expert market analysis and powerful tools with 2 months of IBD Digital for only $20!
Get market updates, educational videos, webinars, and stock analysis.
Learn how you can make more money with IBD’s investing tools, top-performing stock lists, and educational content.
Notice: Information contained herein is not and should not be construed as an offer, solicitation, or recommendation to buy or sell securities. The information has been obtained from sources we believe to be reliable; however no guarantee is made or implied with respect to its accuracy, timeliness, or completeness. Authors may own the stocks they discuss. The information and content are subject to change without notice.
*Real-time prices by Nasdaq Last Sale. Realtime quote and/or trade prices are not sourced from all markets.
Ownership data provided by Refinitiv and Estimates data provided by FactSet.
© 2000-2023 Investor’s Business Daily, LLC. All rights reserved